What a Depressing Election

You may have noticed that I have said almost nothing about the election that took place yesterday. This is because I considered the result a foregone conclusion, and because I consider that result to be a distillation of all that is wrong with democracy in America. The Republicans won even though the electorate is more liberal than it has been in decades; we had two states that voted for both Republican senate candidates and an increase in the minimum wage that those candidates opposed. Marijuana legalization won in three states. One thing that came through clearly in the exit polls was that voters want Republicans and Democrats to work together to solve the country's problems. But one of the victors was Mitch McConnell, architect of the Republican strategy of blocking everything Obama does, and pretty much every new Republican has vowed to repeal the Affordable Care Act and fight any attempt to reduce carbon emissions. Whatever is in store for us, it is not cooperation. It frustrates me that people do not understand this. If people really want something to happen, they have to vote for candidates who support that something, not those who have vowed to keep it from happening.

The mood in America is lousy -- the latest poll I saw showed "on the wrong track" with a big lead at 66%. The President always takes the blame for this, whether it is his fault or not. It bugs me that voters have not seemed to register that for the last four years Obama has been trying to solve some of those problems voters worry about, but that Republicans have opposed him at every turn. Nearly half of voters cannot even say who controls the House of Representatives. This leaves us vulnerable to the strategy that Republicans have applied so diligently: screw up Washington however they can, knowing that the President will take the blame. The political wisdom used to be that politicians needed "accomplishments" to run on, but now that has been reversed, and a vote for any bill the President is willing to sign counts against Republican office seekers. The top Republicans are the ones who oppose everything Obama does.

Meanwhile almost all the Democrats in competitive races have run away from their own accomplishments; one reason I haven't blogged more about the election is that I haven't seen a single stalwart defense of things I believe in from any Democratic candidate.

In democratic politics, identity counts for more than reason. Millions of Americans cast their votes yesterday for candidates who will support policies those voters claim to oppose. They did so because they are angry at Obama, unhappy with the national mood, and feel more solidarity with a conservative, moralistic, patriotic mindset than with progressive experimentation. To me this result goes some distance toward explaining why the world is not a better place. 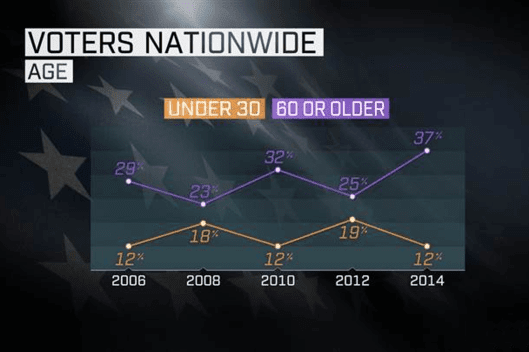 UPDATE: Matt Yglesias sums up politics over the past few years for me: "American politics is descending into a meaningless, demographically driven seesaw."
Posted by John at 7:43 AM

The tactic in play is simple and shortsighted - make the current Democratic president look bad at any cost in the hopes that people will vote in a Republican president next. That's literally the end goal for the GOP - get back into office. Fix things? Pfft. That's not what politics is about, folks!

In the meantime, there seems to be no limit to the damage they are willing to cause. Anything is on the table, so long as it helps ensure "victory" against the other side come the next big election.

Interestingly, this seems like a good time for a third party to sweep in and try to exploit public sentiment. People seem to be voting Republican out of a lack of faith in the Democrats, so if someone showed up with a liberal agenda and none of the baggage that's holding back the Democrats, they might have a decent shot at meaningful change.

Sadly, there don't seem to be any third parties currently extant which are sane, competant, or visible enough to accomplish such a feat... but the possibility does exist at least, particularly if a new party entirely were to rapidly form.