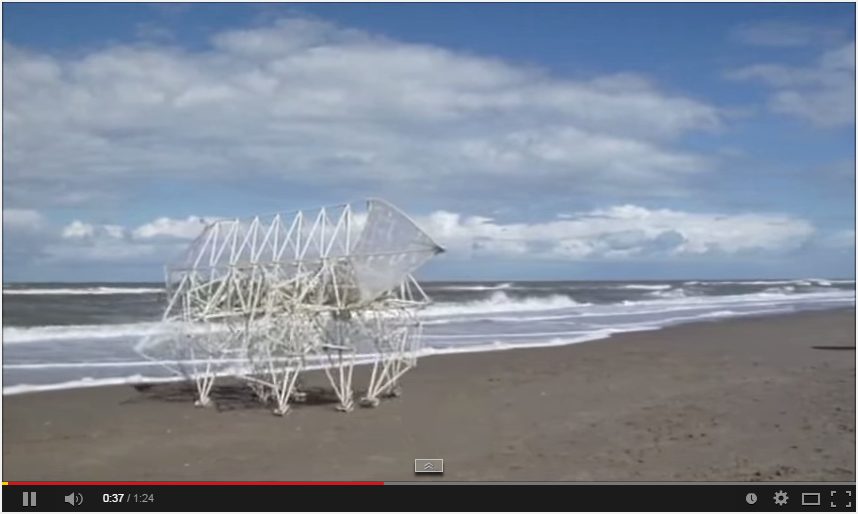 Theo Jansen's famous Strandbeests are coming to America, a tour organized by the Peabody Museum in Salem, Massachusetts. Jansen told Lawrence Wechsler of the Times how they came about. It started when Jansen, who majored in physics in college, read Richard Dawkins' The Blind Watchmaker (1986):


The next few minutes were given over to a passionate disquisition on stick insects. In the distant past, Jansen said, channeling Dawkins, there were nakedly vulnerable insects and dim-sighted birds, but over time some of those insects, through random, accidental mutation, began looking more and more like sticks, while to counter this tendency, their bird predators (again through random, accidental mutation) developed progressively sharper vision. The two creatures, as it were, created each other.

This led Jansen to make pairs of digital creatures on his Atari, programming them to co-evolve and watching the results, marveling as they grew ever more complex and adaptive. He moved on to trying to model how walking might have evolved:


‘'In its essence,'’ he said, ‘'walking is simply constantly changing your shape in such a way that you move forward. But how exactly does it work?'’

And it was in the midst of those cogitations that, as Jansen himself was walking along the Scheveningen shore one day, the thought entered his head that maybe he ‘'should pay a visit to the Gamma hardware store and check out their plastic tubing.'’ He bought a length of standard PVC pipe (the kind that surrounds cable and electrical conduits) and took it back to his studio. And it was around that same time that he experienced his finger-in-the-dike epiphany, going on to publish that seminal strandbeest proposal.

He told me how his first experiments, in the early ’90s, were ‘'sad, pathetic, really hopeless'’ affairs (‘'I was so naïve'’). He used tape to connect the PVC rods, but the creatures kept tearing and collapsing from their own weight; nor did he seem able to get them to walk properly. He advanced from tape to tie-cords, and that was somewhat better, though the walking mechanism was still all wrong. He was lost in a maze of sines and cosines, mapping out legs with two separate cranks, one for the upper limb and one for the lower, differing in phase by 90 degrees. The breakthrough, or rather two major breakthroughs, occurred on a single night, at the end of 1991. First he realized that the leg could have a far simpler structure if a single crank were moved up to the hip joint. (He proceeded to demonstrate all this for me on a plywood-board model he often takes to classes and lectures.) The leg itself would need to be fashioned out of 13 rods, pivoting in relation to one another, so that everything would depend on the specific ratio of the lengths of the 13 segments, one to another. The goal would be to create a long, slow stride with gentle curves planting the leg onto the ground and then pulling it up in order to quickly bring it back to the front of the next long stride.

But how to determine those ratios? There were millions, probably billions, of possible combinations of the 13 figures, and even a computer working its way through all of them in brute sequence, especially in those days, would most likely take centuries to evaluate them all. But — and here came his second breakthrough of the night, a reversion to his Dawkins ideal — what if, once again drawing on those earlier experiments, he were instead to program an algorithm whereby thousands of sets of ratios could randomly compete against one another, the best virtual performers advancing forward as the basis for a new generation, generation after generation, until the algorithm itself naturally brought forth the best solution? He tried it, and his Atari chugged away literally for months, but eventually he had the magic ratios, 13 specific numbers (a=38, b=41.5, c=39.3, d=40.1, e=55.8, and so forth) that were to form the proportional basis for all the walking beasts that followed. 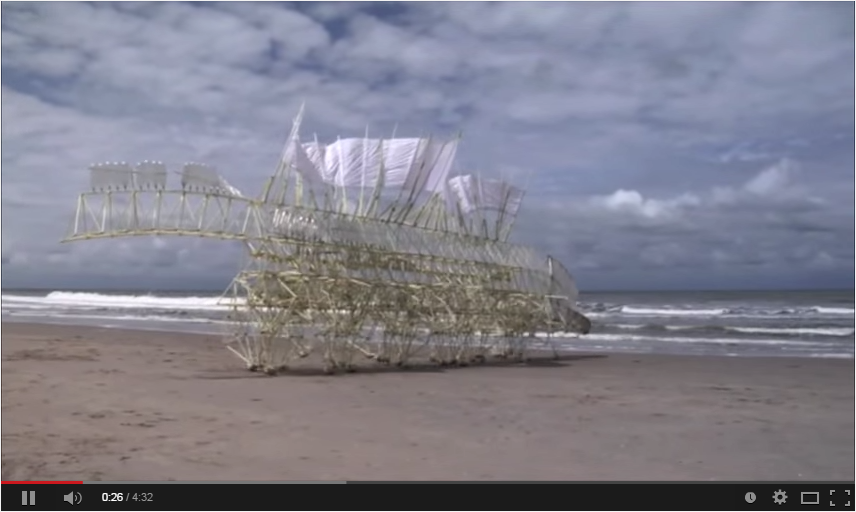 Jansen insists that his beasts are not just an art project or an engineering exercise, but an actual model of how life originates and evolves. He may have strange ideas about life, but the Strandbeests are certainly amazing. They will be at Art Basel Miami in the spring of 2015, Salem in the fall of 2015, then on to the Chicago Cultural Center and then probably other destinations.
Posted by John at 7:45 AM