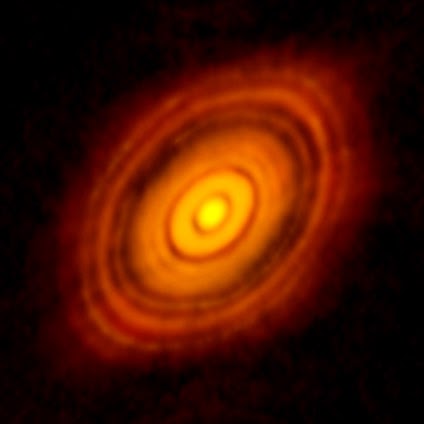 Astronomers testing a new radiotelescope have captured this amazing image of a "planetary disk" around a very young star called HL Tau:

Astronomers have captured the best image ever of planet formation around an infant star as part of the testing and verification process for the Atacama Large Millimeter/submillimeter Array’s (ALMA) new high-resolution capabilities.

This had to be done with radio telescopes because HL Tau, like all new stars, is surrounded by a cloud of gas that blocks visual and infrared light. 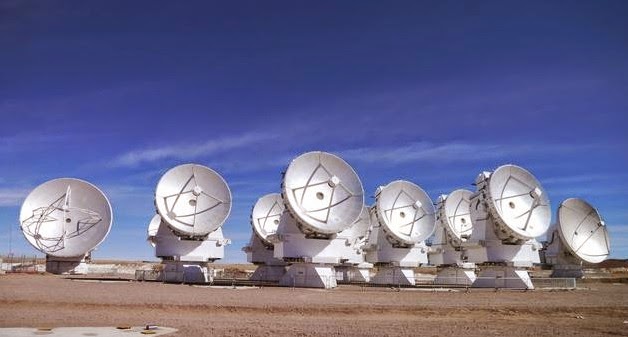 In case you were wondering, ALMA is an array of 66 giant radiotelescopes in Chile, built by a worldwide consortium of countries. They work by interferometry, combining the signals received by telescopes up to 15 km apart into a single image:


To operate properly, ALMA must have its 66 antennas and electronics working in perfect synchrony, with a precision of one millionth of a millionth of a second. In addition, the signals from the different antennas must be combined in a way that the path followed from each antenna until it is combined at the central computer (the correlator) must be known with an accuracy equal to the diameter of a human hair (hundredths of a millimeter).

Amazing, the things we can do when we put our minds to them.
Posted by John at 12:20 PM

Accretion discs are strange and curious things. I do wonder what we hope to learn by studying them, though. Still, at least we can study these without the folly and costs of rocketry.