Bartholomeus Spranger at the Court of Rudolf II 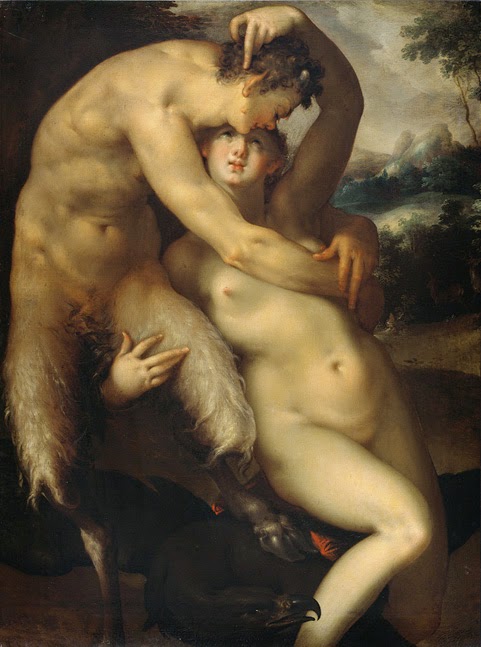 The Met is mounting what they say is "the first major exhibition" of the works of Bartholomeus Spranger (1546-1611), and after spending a few hours with his work I can see why nobody thought to do it before. (Jupiter and Antiope, 1596) 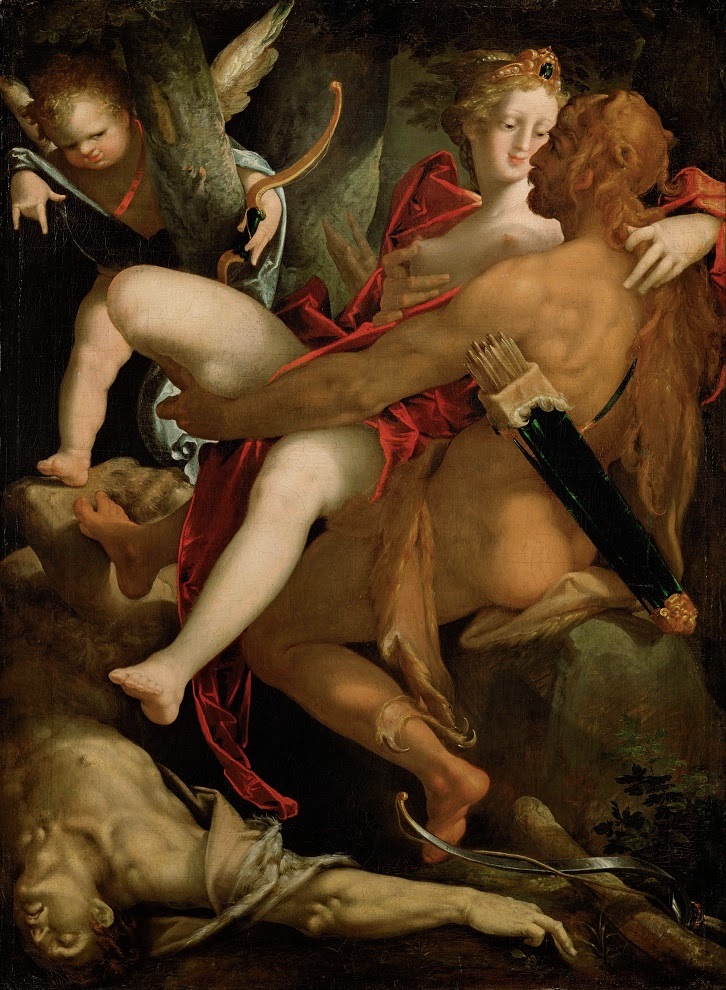 Not that Spranger didn't have talent, but this stuff has a weirdness about it that builds walls between the paintings and modern viewers. Probably sixteenth-century viewers, too, a point I'll come back to. Consider this, Hercules, Deneira and the Centaur Nessus. Striking arrangement of bodies, both the lovers and the dead foe, and well executed. 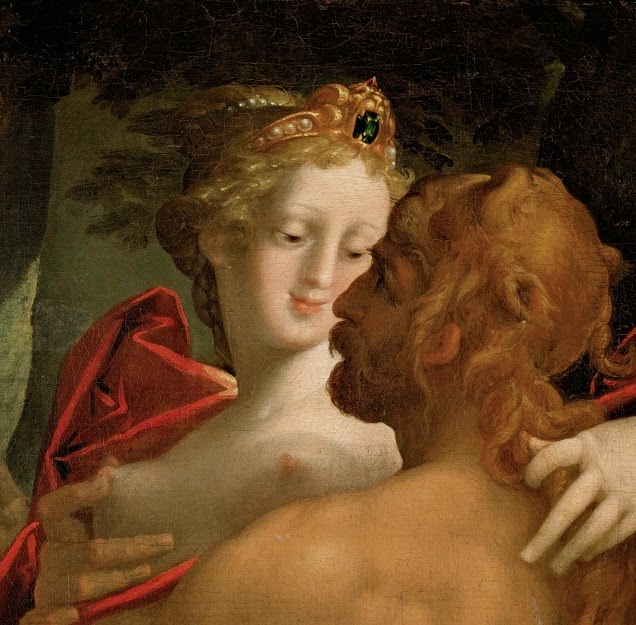 But what is she wearing on her head? 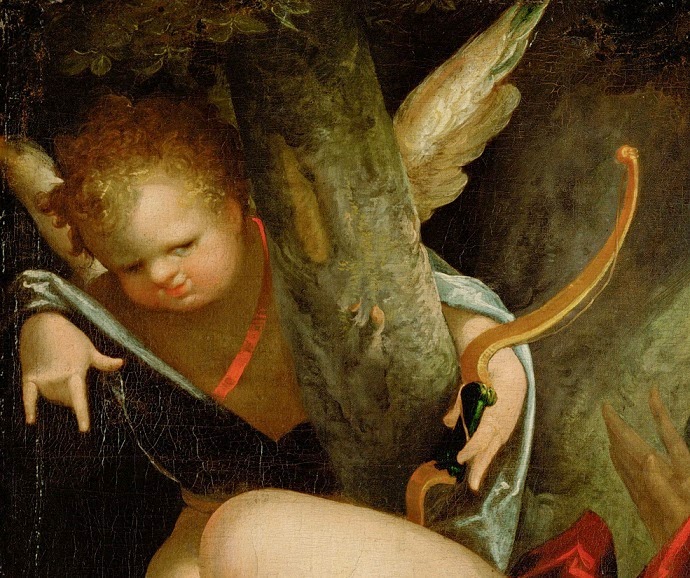 And what's with the maniacally suspicious baby in the corner, making a gang sign with his hand? Hands in strange postures are strewn throughout Spranger's work, making me wonder which are gestures and which just hands. 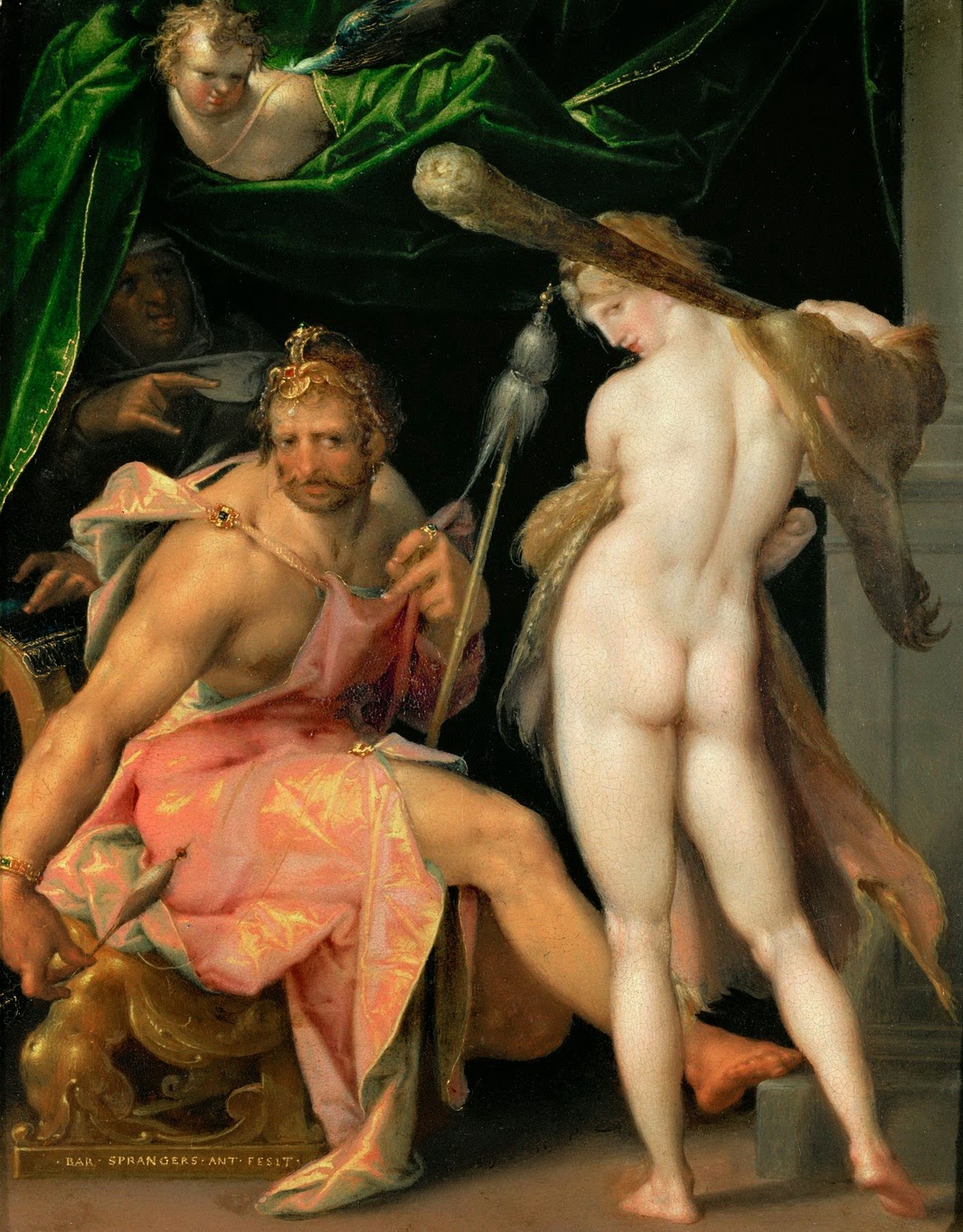 This sort of stuff is called mannerism, because the artists tried to distinguish themselves from high Renaissance classicism by adopting particular "manners" or styles of painting. These "manners" were intentionally idiosyncratic and often a little weird. Or a lot. After all, the point was to be different from what had been done before or was being done elsewhere; one characteristic of mannerism was that artists were responding much more to other contemporary or recent painters than to the world around them, or to the distant past. Consider Spranger's Hercules and Olympia. This is when the Gods got tired of sentencing Hercules to impossible tasks at which he somehow succeeded, thereby further enhancing his fame, and condemned him to serve the queen as her handmaiden. Not even Hercules, they thought, could turn that into a triumph. From the look on the queen's face, though. . . . 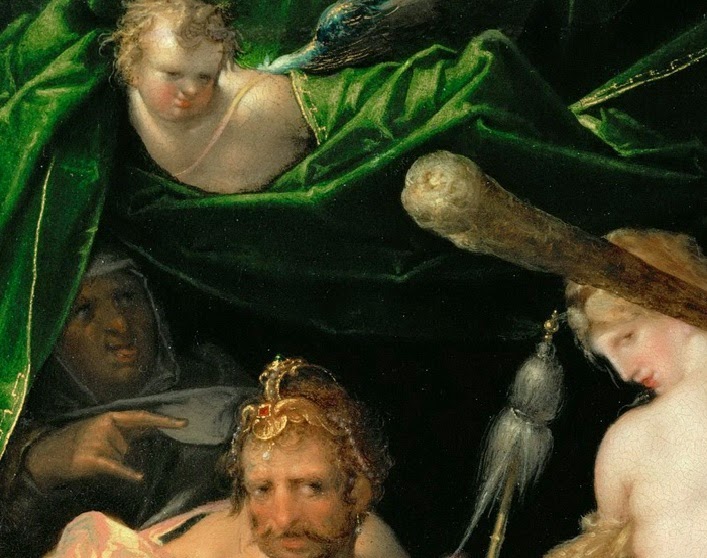 Notice that same suspicious baby looking on, but this time the hand sign is being made by an old woman in the shadows. What a bizarre arrangement of faces. Spranger's only known self-portrait, which might have been titled The Anxious Man. 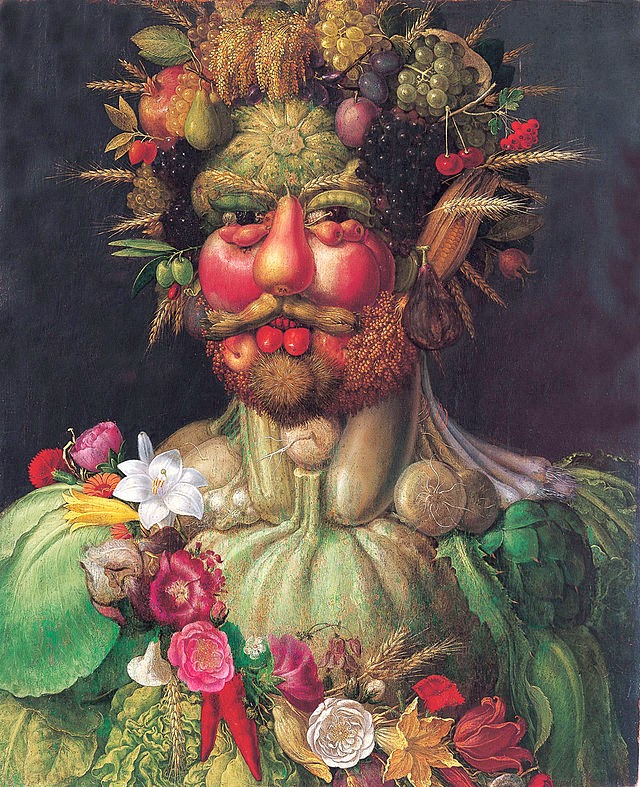 All of this makes a bit more sense when you consider that although Spranger was born in Antwerp and trained in Italy he spent much of his career at the court of Emperor Rudolf II (reigned 1576–1612) in Prague. Rudolf was one of the stranger characters hoisted onto Europe's thrones by the rigid machinations of primogeniture. Among other things he was probably history's greatest patron of alchemy and other occult arts. This, by Giuseppe Arcimboldo, was his favorite portrait of himself. So you can tell that his taste in art was a bit askew from the classical norm. At Rudolf's court the Renaissance fascination with secrets, obscure symbolism, and insider knowledge, along with general contempt for the ignorance of non-initiate commoners, was carried to its furthest extreme. I have no doubt that all of the strange elements in Spranger's paintings meant something to the circle of aficionados around the emperor, whether that something was alchemical, mystical, historical, or just an inside joke at the expense of some stupid king they all despised. And if the art they admired seemed a bit off to outsiders, so much the better. 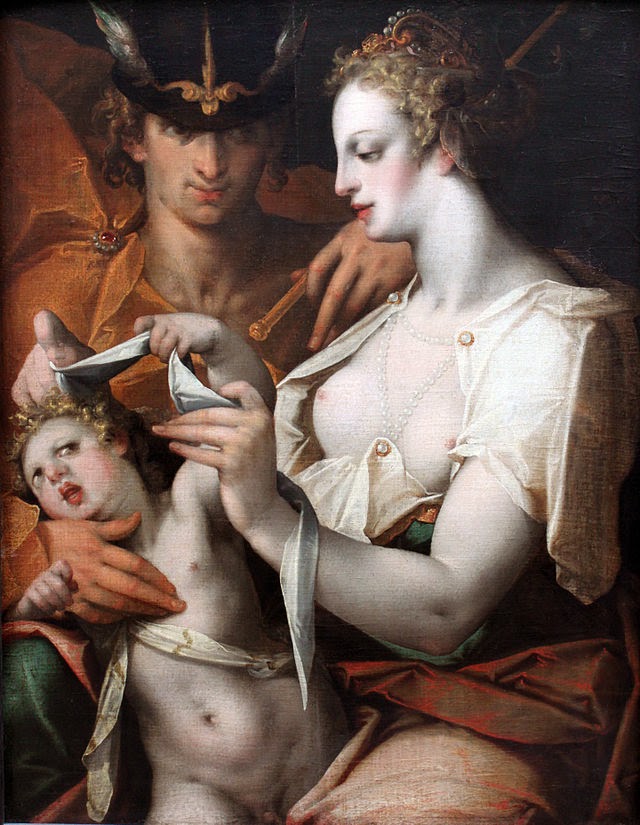 The woman depicted here (Venus and Mercury Swaddling Love) seems to have been Spranger's favorite model, so of course she has a strikingly strange face. And notice the weird hat Mercury is wearing -- Spranger had a thing for bizarre headgear. 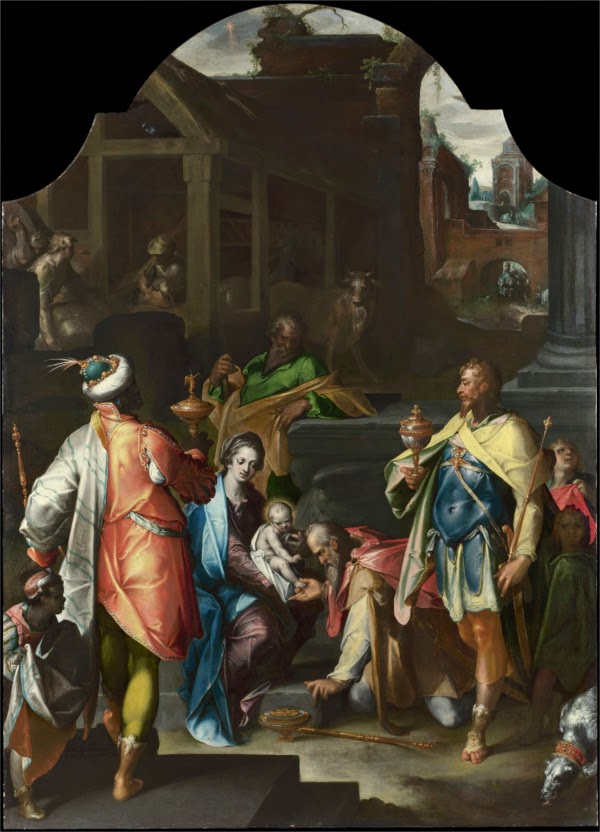 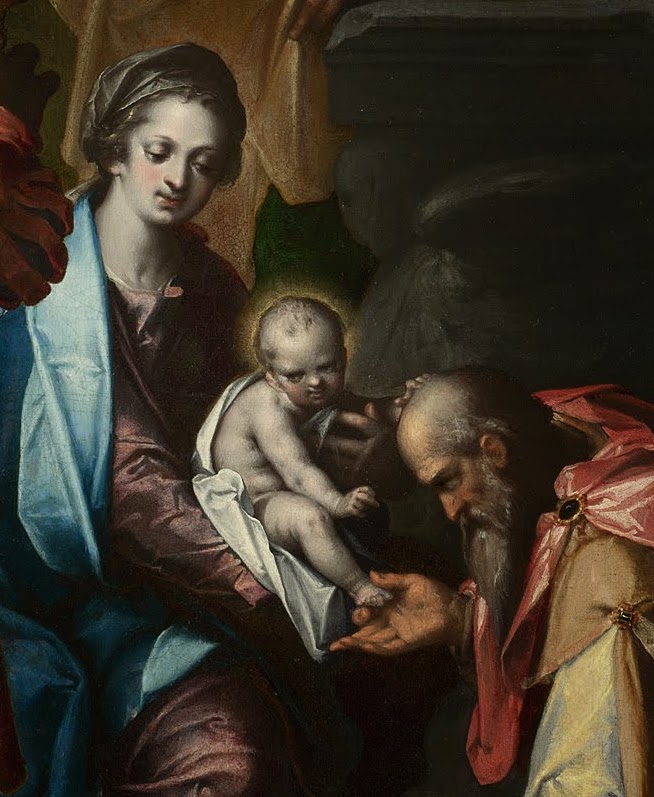 That same model again, this time as Mary welcoming the three Magi. And look at that sinister baby Jesus. This is closer to how I imagine the birth of the Antichrist than to the Christmas story. 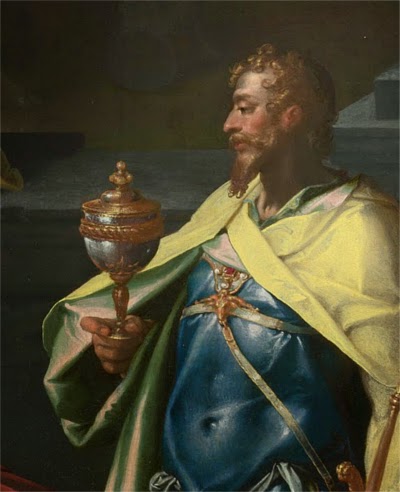 This guys seems a lot more interested in himself than in Jesus. 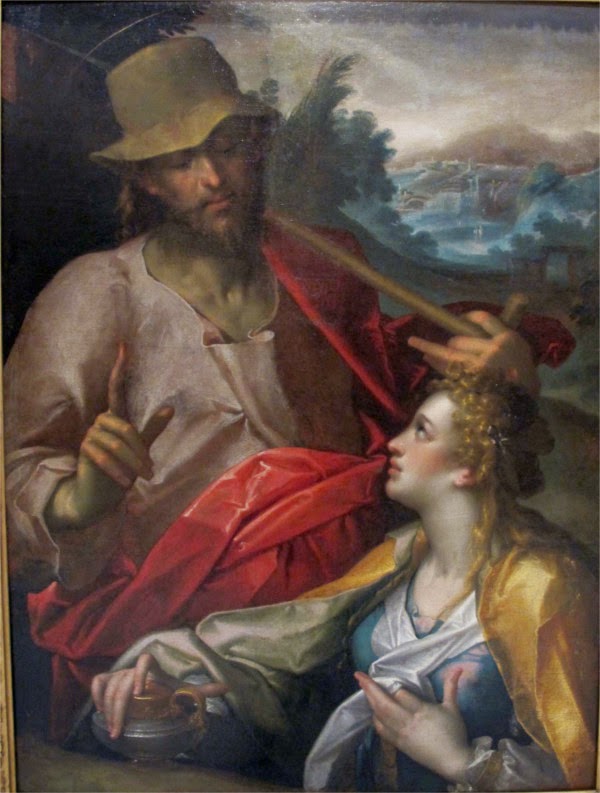 Speaking of headgear, why not show Jesus in a hat? I kind of like it actually. He looks like the Wayfaring Stranger. 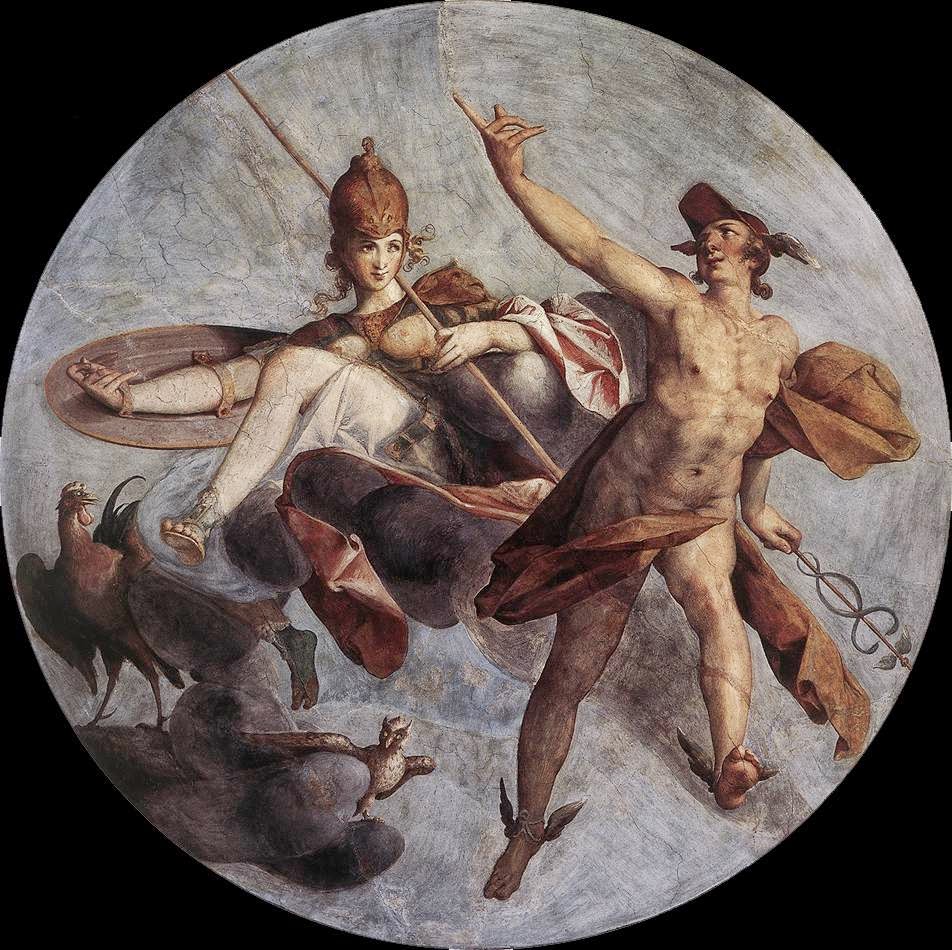 Here's Minerva (Athena) looking as little as possible like a stern virgin goddess of wisdom, and Mercury doing I'm not sure what. 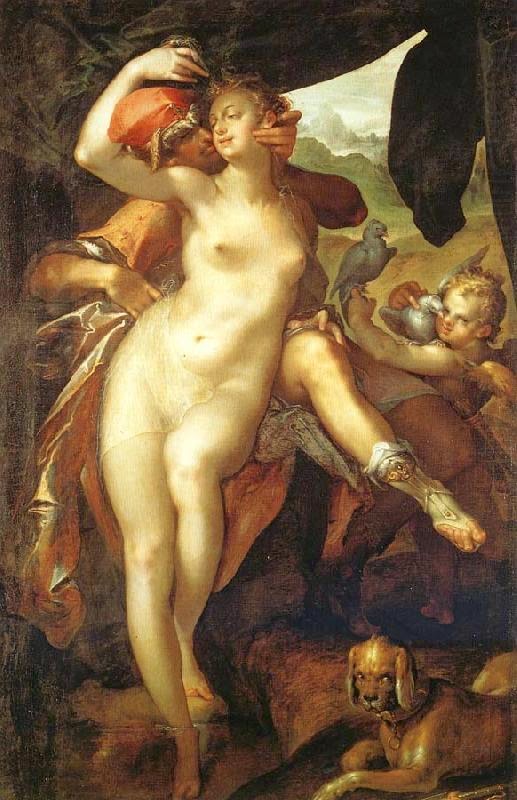 Venus and Adonis, featuring that same maniacally suspicious baby angel. The less said about the dog, the better. 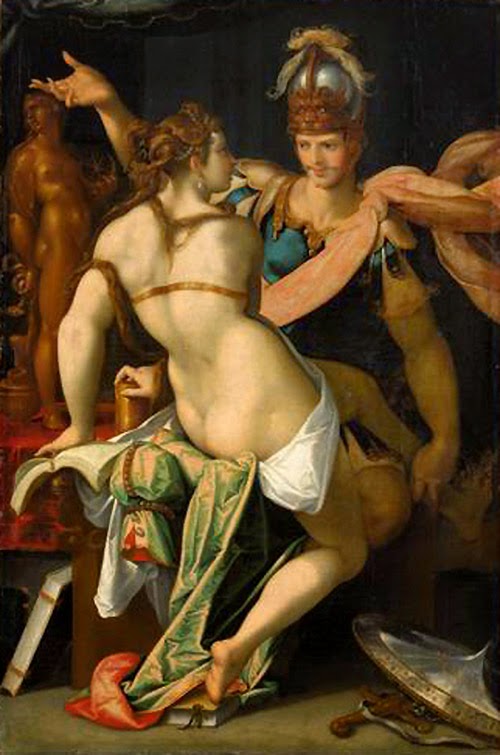 Hermaphroditus and the Nymph Salmacis, a strange story to which Spranger had added more bizarre headgear and a cheesy mustache. 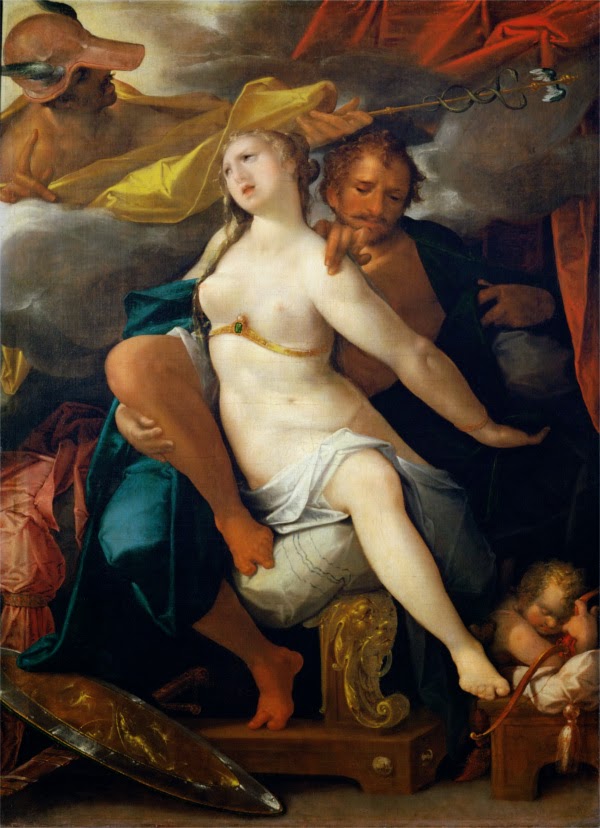 Another Venus and Adonis, except that rather than gazing fondly at Adonis Venus is imploring Mercury to get her out of there. The baby has finally given off glowering and fallen asleep. 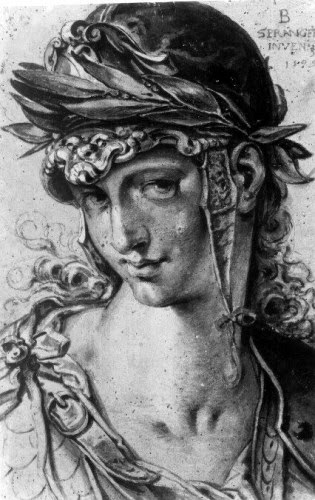 A wonderful drawing, presumably a study for one of his goddesses or nymphs, 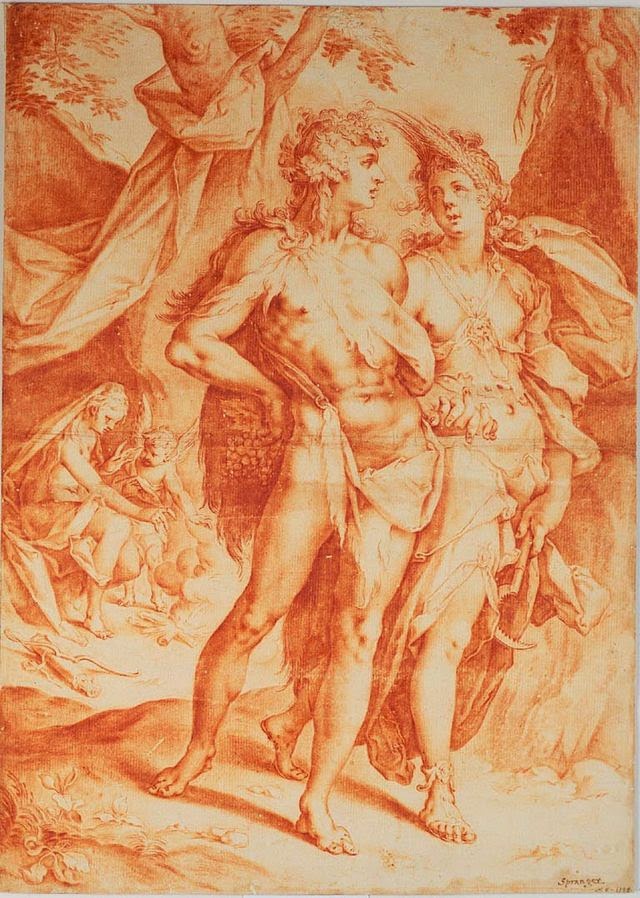 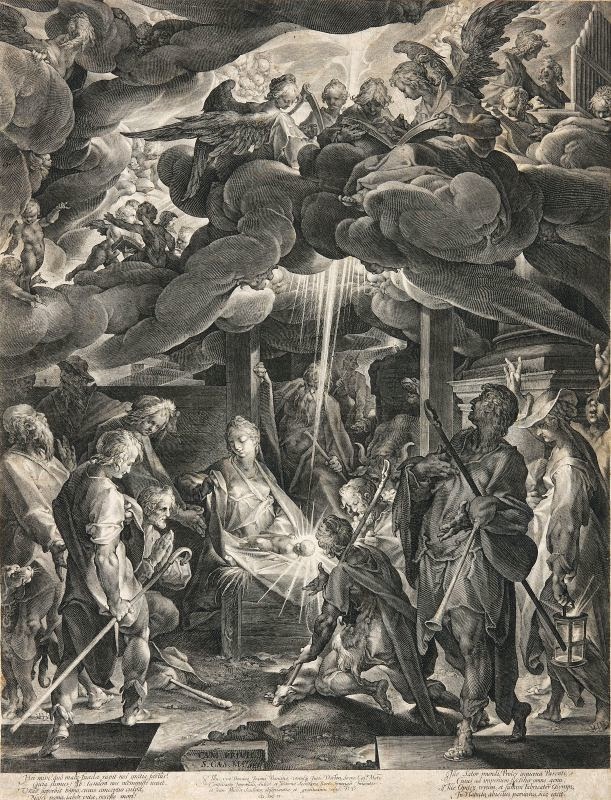 Engraving of the Christmas scene based on a drawing by Spranger. Anyway, this is all interesting, and adds another piece to my knowledge of the strange court of Rudolf in Prague. But I think if I make it to the Met this year I'll skip the Spranger show.
Posted by John at 1:51 PM