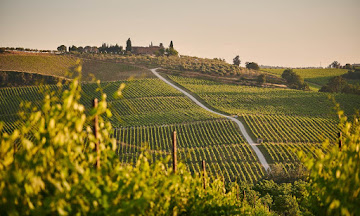 For decades the Italian government has been confiscating land from the Mafia and other organized crime groups. But for a long time they didn't know what to do with it, since they couldn't sell it and didn't want to get into farming themselves. Much of it just languished. Then anti-Mafia Sicilians pushed for a law that would allow for the land to be leased to cooperatives that would support local people. This law was passed in 1995, and by 2001 some cooperative farms were up and running in Sicily and Calabria.

The most prominent group involved is Libera Terra, an offshoot of the anti-Mafia organization Libera. Libera Terra runs nine co-ops in Sicily, all raising organic crops with sustainable methods. Their products are sold to high-end restaurants and gourmet shops through Alce Nero, a major organic food marketer. This is pretty small-scale in economic terms – Libera Terra employs about 170 people and its revenue is about $8 million a year – but you have to applaud any effort to take from the Mafia and return to the people.

The crooks of course hate this, and there have been numerous arson attacks and the like against these operations. Interviewed in New York a few years ago, a Libera Terra spokesman said,

Yes, despite all they still get threats. I have spoken with many of these guys working the fields and the stories are endless. Machines are stolen, lands are set on fire…I was talking to one worker from Sicily who told me that in order to see what was happening at night he started sleeping in his car, parked by the field…every morning he would then find a single bullet on top of the car. At first he didn’t react but collected all the bullets. Later he made a necklace out of these bullets and started walking around town wearing it, just to show that he was not intimidated.

The Mafia after all originated as a way for Sicily's landlords to control their estates and put down unrest among the peasants, so it makes sense that the fight against them should include returning power over the land to the people who work it.
Posted by John at 6:36 AM