The Viking Sorceress of Fyrkat

Those of us interested in past beliefs about magic do a lot of hoping and wishing. Like, it's true this text was written two centuries after the events it describes, but maybe it is based on earlier sources or a strong oral tradition. Or, yes, there are other possibilities, but isn't the most likely explanation that this body was a victim of human sacrifice?

But sometimes the evidence is pretty much irrefutable, and can say with very little doubt that we are reading about or looking at an actual witch or wizard, someone who was deeply learned in an ancient, arcane tradition. One of those cases is the woman I will call the Sorceress of Fyrkat, although technically she is the occupant of Fyrkat Grave 4. 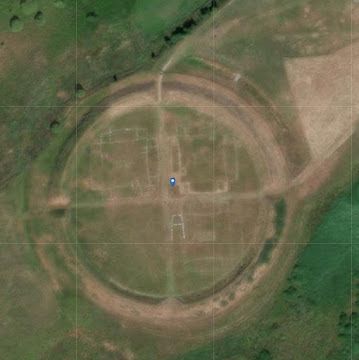 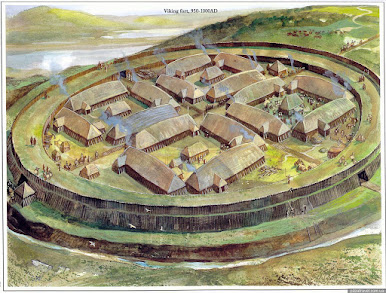 Fyrkat was one of the fortresses built by the kings of Denmark, probably around 980 AD. There are at least two other nearly identical fortresses from the Viking age, and two other possible ones. The best guess is that kings had them built as part of preparation for a major campaign. In this case the king would have been Harald Bluetooth, and the campaign was his successful war to regain southern Jutland from the German emperors. Note that Harald Bluetooth had by this time converted to Christianity and required all of his followers to do likewise. 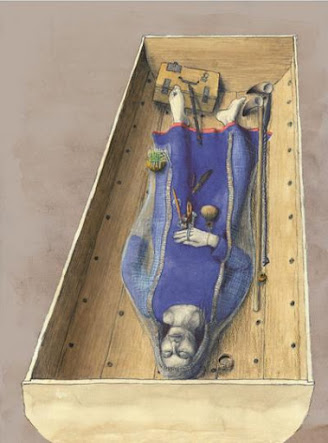 The street that ran out Fyrkat's northeast gate led to a graveyard. Outside the gate the street was raised on a wooden walkway supported by posts, and the graves were laid out neatly along its sides. One of the graves held a woman of exalted status and very strong magical associations. She wore a blue dress with accents of red and embroidery in gold thread. Over it was a linen garment that has been seen in various ways; the Danish National Museum interprets it as you see here, as a shawl so thin as to be nearly transparent. This would have been a highly stylist get-up at the time, just like those worn by noble women in the German empire. Rich Norse women usually held their attire together with a lot of fancy pins and brooches, but this tailored dress needed no such fasteners. She was laid in the bed of a wagon. Wagons like this were standard coffins for high status women in this age, showing that while alive they did not have to walk but were driven everywhere. 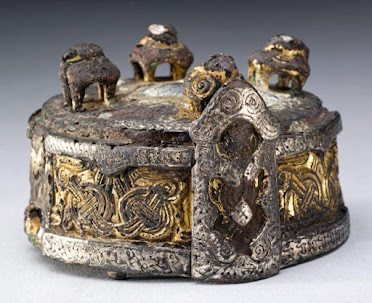 She was not buried with a huge quantity of grave goods, but the select items placed with her tell a remarkable story. Near her head was this box brooch, which was filled with what seems to be white lead makeup. This is highly unusual for the Viking world, and the substance was probably imported from the Mediterranean. 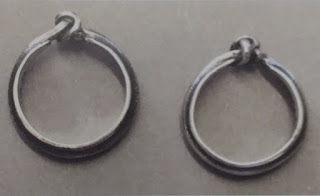 On her second toes were two silver toe rings, of which these are replicas. These are the only toe rings known from the whole Norse world and they probably came from the Middle East or Central Asia. 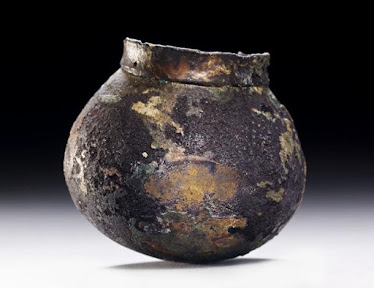 Near her feet was this bronze cup, also probably from the Middle East. This is a more standard object for a rich Norse or Anglo-Saxon burial; Byzantine or Arab bronze and brass ewers, bowls, and so on seem to have been common luxury items in the north. 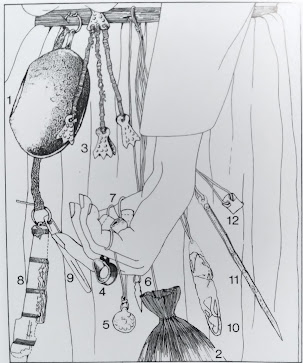 A group of objects was concentrated around her waist. They are thought to have been suspended from her belt, as shown here in a drawing by Hayo Vierck. There is a knife, its sheath bound with silver, and a slate whetstone. Since Vikings and Anglo-Saxons had a thing for fancy whetstones, which we often find in graves or other ceremonial contexts, we should probably imagine that a sacrifice was preceded by a dramatic sharpening of the killing instrument. (Imagine this act accompanied by chanting and drumming, as the tension builds.) Item 5 in the drawing is a guess about the origin of numerous tiny pieces of thin glass, which may represent a small ampule of this type. This was a common form of protective amulet in the classical world and their use continued into Christian times, when they were filled with water used to wash saints' tombs. Item 2 is a hypothesized bag that contained a pile of henbane seeds. Henbane can give you strong hallucinations, and it is one of the plants most commonly associated with magic in northern Europe. 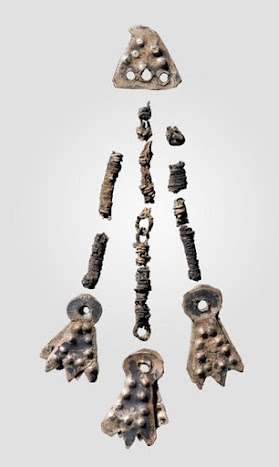 Item 3 is this "duck's feet" pendant, probably from Russia. Only one other example is known from the Norse world, from another grave that might be a queen. 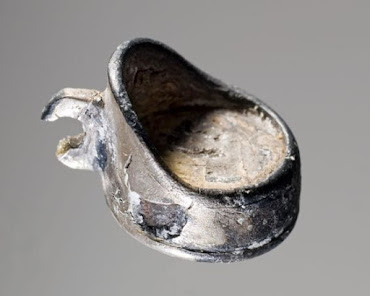 Item 4 is this chair-shaped amulet. These are one of the items most strongly associated with Norse magic, known only from the graves of women suspected of being seers or sorcerers. They probably represent the "high seat" on which a völva sat to make her prophecies, as described in several Norse sources.

You may be wondering why I haven't called Fyrkat 4 a völva, since that is how modern writers usually refer to Norse magical women or prophetesses. But the Old Norse terminology of magic and magical practitioners is one of those topics that, once you dive into it deeply, you wish you hadn't. There are several terms that all shifted meaning over the centuries. It is quite possible that this woman considered völva such an unbearable insult that she would have had her men cut your tongue out for calling her one, before prophesying ruin for your whole family. (Like "witch.") So it is safer to avoid Norse terms altogether and use something generic and English. Incidentally you may think you know why a Norse wise woman was called a völva, which looks like an evocation of feminine mystery. Really it means "staff bearer". Which brings me to the other incontrovertibly magical item from Fyrkat 4, a badly corroded iron staff or wand with bronze fittings.

About thirty of these are known; this image is from the British Museum. Some of them, like these, have ornamentation that sets them apart, but others look pretty much exactly like cooking spits. And indeed some of them may have been cooking spits, although in burials they are associated with fey women. So likely they were used for a different purpose.

The chest at the feet of Fyrkat 4 was old and had been repaired multiple times with different sorts of wood, which is an odd detail. It contained mostly clothing, of which all that survived was a quantity of gold and silver thread. So very fancy clothes. There also a set of the standard objects buried with Viking women: shears, a spindle whorl, another whetstone.

The Fyrkat sorceress must have been a formidable woman. Rich, she spent much of her money on exotic goods from far away, favoring in particular fashions that had not been adopted by her peers. And she was, in an allegedly Christian kingdom, a devotee of an ancient magical tradition. 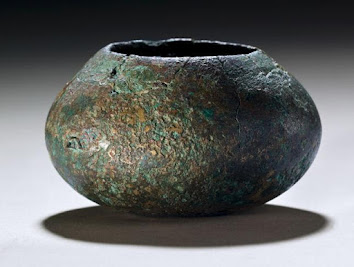 Bronze bowl from Fyrkat 4, Item 1 above

That tradition had many elements. The best known and probably central was prophesying. The sagas tell us that seers regularly traveled through the Norse lands, calling at each prominent farm. There they were lavishly welcomed and they and their followers provided with a feast. They presided over a ritual that involved chanting and, in pre-Christian times, animal sacrifice. They then dressed up in an elaborate costume –was this when the Fyrkat sorceress painted her face white? – took their place on a chair atop a platform and prophesied what the year would bring for the household. According to our sources, they usually provided good news. Again according to our sources, they could be bribed, and would issue better prophecies for those who fed them better. This same accusation was of course made about oracles in the ancient world and is still made about modern shamans, often by other shamans, so this debate seems to be part and parcel of the whole business of prophesying.

The "Pagan Lady" from Peel Castle, Isle of Man, Viking Sorceress buried with a Swan's Wing. By Thorhallur Thrainsson.

Notice that the saga sources say little about the seeress going into trance or ecstasy. But henbane is no trivial drug, and anyone who took enough might go very far indeed past the rational state. Plus ecstasy of one kind or another is almost universally part of the prophetic tradition. So I think we should imagine that Norse seeresses at least sometimes drugged themselves into a trance state to seek answers to pressing questions. One thing we have learned from modern shamans is that they are capable of working in multiple modes, giving pat answers to standard questions – yeah, sure, you'll have a great harvest, what are we eating? – while also drugging or otherwise driving themselves into very dangerous trance states when confronted with a real crisis.

I have also refrained from calling Fyrkat 4 a seeress, which is how the Danish National Museum titles her. I did this because the Norse magical tradition also included other elements besides prophecy, among them the standard repertoire of cunning folk: healing, finding lost objects, making protective amulets, and so on. They were also said to summon storms and curse their enemies to death. I assume that the Fyrkat sorceress engaged at least in healing, and it is fun to imagine that sometimes King Harald sent his bishop away and asked his sorceress to curse his enemies or seek a vision of how his upcoming wars might go. 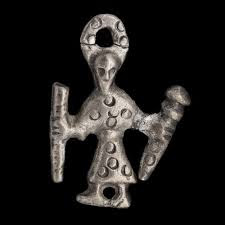 The "Staff Wielder" or "Weapon Dancer" figurine from Birka in Sweden

Much of this material comes from Neil Price, The Viking Way: Magic and Mind in Late Iron Age Scandinavia.

'Item 3 is this "duck's feet" pendant, probably from Russia. Only one other example is known from the Norse world, from another grave that might be a queen.'

I find it interesting that we've taken to calling them "duck's feet" pendants, when to my eye the design instantly resembled a meteor, which seems FAR more like something you would associate with magic-wielders and queens.