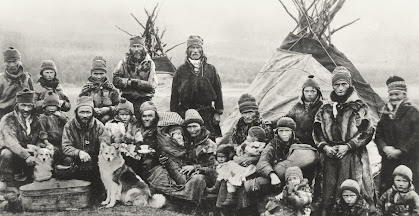 When asked about their societies, people have a habit of answering in terms of norms rather than realities. Thus, when missionaries asked Sámi people in northern Scandinavia about their old religion, they said that only men could be shamans, or noaidi in their language. In fact they described what sometimes seem like two separate religions for men and women. Each sex had their own gods and spirits, their own rites, and their own holy places. There was for example a holy mountain that women were forbidden to go within a mile of.
So the missionaries wrote down, "only men can be noaidi." Like, say, a contemporary American might write, "with us women and men are completely equal."

Actually, though, there are several famous female noaidi whose names and stories have been passed down to us. Around the world we often see that women take on formerly male roles when the men all leave for work in the city or on the railroads, and in those cases we can't take the roles of women in recent times as good indications of what used to be. But this is not what we are seeing in Scandinavia, since Norse texts speak of Sámi sorceresses in the Middle Ages. 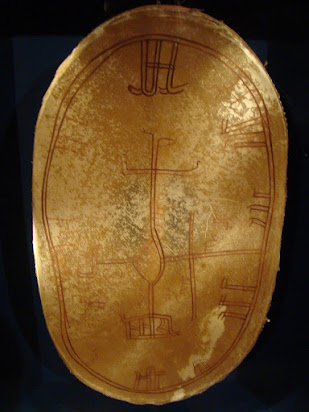 Sámi drum
Male shamans used drums in their performances and spoke of "riding" their drums into the other lands to seek out wisdom. The drums were surrounded by taboos, one of which was that women were not allowed to touch them. Some observers said that while women could do some noaidi magic, they were still forbidden to touch or use drums.

But that, it turns out, wasn't true either. Neil Price:

The most famous of these individuals was Rijkuo-Maja of Arvidsjaur (c. 1660-1757), about whom stories are still in active circulation. She was a woman of considerable wealth, her prosperity deriving from ownership of an immense reindeer herd which she was said to control through her abilities as a noaidi . . . She seems to have practiced the same broad range of rituals as a male noaidi.

Tradition suggests that she was a devotee of the thunder god, to whom she sacrificed specially-chosen reindeer bulls by burying them alive at a marshy place called Askmyren or 'thunder-bog.' At this bog, she also made sacrifices on bird platforms [raised platforms on which meat was placed for eagles or ravens], and after her death when her land passed into other ownership, it was known as the 'thunder mark.' 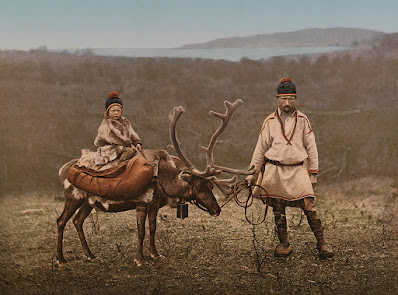 Ethnographer Bo Lundmark says that "Rijkuo" means "rich" in the local Sámi dialect, so her name could be rendered as "Rich Maja."

When a Saami woman in the area wanted to show how wealthy she was, she often did this by wearing several frocks on top of each other, so that the shortest would be on the outside, the second shortest next and soon. Rijkuo-Maja apparently wore five.

One of the fascinating things to me about the Sámi tradition is that by the time anyone thought to study their religion they had been in contact with Norwegians and Swedes for a thousand years, passing ideas back and forth. The thunder god worshipped by Rijkuo-Maja was called Horagallus or "Thor man" and she marked the reindeer chosen for sacrifice by clipping their ears, just as Swedish herders put ownership marks on their cattle. Neil Price:

Rijkuo-Maja is recorded as having stood in the shallows of a lake to work magic for producing a thunder storm, presumably linked to her patron and this case for the purpose of dousing a fire which threatened the reindeer pastures. Two items of her equipment are of special interest here. She used a head-covering of some kind, mentioned in some sources as a lijnie or veil and in others as a skudnjaa, a 'sleeping rug.' . . . Rijkuo-Maja's storm ritual involved not only drumming but splashing the lake water and whistling.

One account has her striking the water with a 'stick with brass trimmings,' which sounds a lot like the wands used by medieval Norse seeresses. Besides these rituals she also used her drum for gathering her reindeer herd every morning. 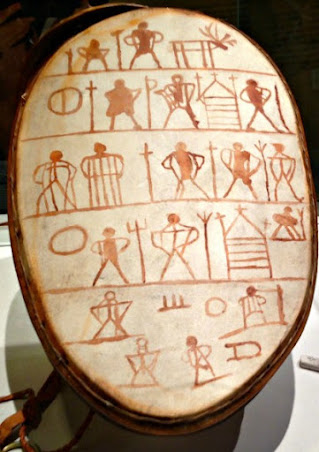 Rijkuo-Maja had a special relationship with both domestic and wild animals. According to tales recorded in the 1920s,

she employed only one shepherd despite the size of the herd, and could pick out individual deer at a great distance; there are other traditions recording that 'she knew her deer in a special way.' Several records show that this relationship was widely believed to have continued after her death. When Rijkuo-Maja's family disobeyed her wishes for a non-Christian burial, within a few years the reindeer herd had either scattered irretrievably or been killed in drift ice, as she herself had prophesied if her instructions were not heeded. One informant mentions that she did not need dogs because the wolves were in her service – a strange suggestion given the traditional Sami antipathy to these animals. She seems also to have adopted an unusual role in relation to the other animals in her home tract, placing both wild creatures and edible birds 'under her protection.' If hunters nevertheless killed animals in the area against her wishes, she compelled them to sacrificed their prey before a great pine tree, with a human face carved in its bark.

Those trees were common sites of ritual activity in the Sámi lands, but unfortunately I can't find a picture of one.

Rijkuo-Maja seems to have bene especially associated with birds, with the raven, eagle and bench-jay being specially noted as among the creatures the she 'protected' in her reindeer pasture.

The bench jay was commonly seen as a potential spirit helper for noaidis, like wrens in western Europe. 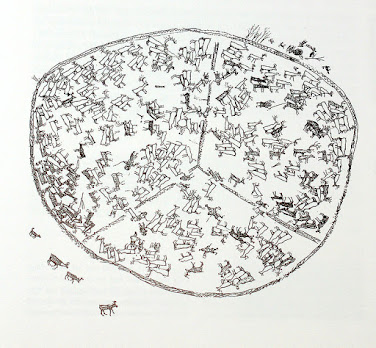 One thing that comes clearly out of these stories is the close relationship between the religious and magical traditions of the Sámi and the physical realities of their land and culture. Their religion was rooted in particular places they knew well, and in the kind of places (mountains, lakes, marshes) where they spent their time. The powers they cared about were those that impacted their lives: the weather, the fertility of the reindeer. You could tell a spiritually powerful person because she or he was blessed by the world, with many reindeer and other signs of wealth.

All of the pagan traditions were like this, rooted in one place and society, speaking its truths. One of the truths of the Sámi was their extreme political fragmentation, and another was the deep division between the men's and women's ritual spheres. They had norms, but they had nobody to enforce them, and a man who tried to dictate to women about women's affairs might just be laughed at. So if a woman wanted to pick up a drum and speak to the spirits she damn well could. If she was successful, she would earn great respect. And she might, like Rijkuo-Maja, be remembered 200 years later as a great and powerful person.

Based on Bo Lundmark, Rijkuo-Maja and Silbo-Gåmmoetowards the Question of Female Shamanism in the Saami Area (1987) and Neil Price, The Viking Way:  Magic and Mind in Late Iron Age Scandinavia (2019)

Another fascinating piece on this theme. I hope we will be seeing your review of Price on bensozia.