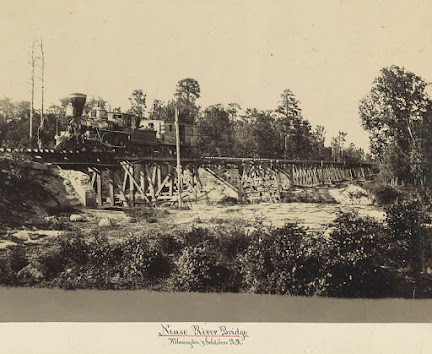 Every once in a while I read a document that makes me feel like I am witnessing history happening. If you've read anything about the US Civil War you know that one of the major themes was the self-liberation of slaves, who took off for Union lines by the hundreds of thousands. The government in Washington did not actually formulate a clear policy about these refugees until 1864, so it was left to commanders on the spot to make decisions. At first a few commanders sent escaped slaves back. But the idea quickly spread that since the Confederates used slaves to build fortifications, they were potential weapons and could therefore be seized under military law as "contraband of war." Hence, they came to be called "contrabands." I've been reading through a collection of documents relating to these refugees and I stumbled across this report from Vincent Colyer, who headed up the effort to employ and assist refugees in New Bern, North Carolina after it was taken by Union forces in 1862:

Agreeably to your request, I give you a brief report of the freed blacks in the department of North Carolina during the time they were under my charge. I received my appointment a few days after the taking of Newbern. . . .

My first order from Genl Burnside under this appointment, was to employ as many negro men as I could get up to the number of five thousand to offer them eight dollars a month and one ration of clothes. They were to work on the building of forts. This order remained standing on my books up to the day I left the Department, July 6th, without our ever being able to fill it. Up to the time I left there were not over twenty five hundred able bodied men within our lines, so that it will be readily understood why the negroes were never a burden on our hands.

The truth was we never could get enough of them, and although for a little while there were a few more at Roanoke Island than were wanted there after the fort was completed.

They were at the following places: at Newbern and vicinity 7.500; at Roanoke Island and posts adjacent 1,000; at Washington, Hatteras, Carolina and Beaufort 1,500.

In the four months that I had charge of them the men built three first class earthwork forts: Fort Totten at Newbern, a large work. Fort Burnside on the upper end of Roanoke Island & [. . .] at Washington N.C. These three forts were our chief reliance for defence against the rebels. in case of an attack. have since been successfully used for that purpose by our forces under Major Genl Foster.

The negroes loaded and discharged cargoes for about three hundred vessels, served regularly as crews on about forty steamers, and acted as permanent gangs of laborers in all the Quatermasters, Commissary and Ordnance offices of the department.

A number of the men were good carpenters. blacksmiths coopers &c. and did effective work at bridge building, ship joining &c. The large railroad bridge across the Neuse was built chiefly by them [see photo at top] as was also the bridge across Batcholors & other creeks & the docks at Roanoke Island & elsewhere. Upwards of fifty volunteers of the best & most courageous were kept constantly employed on the perilous. but most important duty of spies, scouts and guides. In the work they were invaluable and almost indispensable. They frequently went from thirty to three hundred miles within the enemy's lines; visiting his principle camps and most important posts and bringing us back important reliable information.

They visited Kingston Goldsboro. Trenton Onslow Swansboro, Tarboro of points on the Roanoke river; after these errands barely escaping with their lives. They were pursued on several occasions by blood hounds and two or three of them were taken prisoners; one of these was shot; the fate of the others not known. The pay they received for this work was small but satisfactory. They seemed to think their lives were well spent, if necessary in giving rest, security, and success, to the Union troops, whom they regarded as their deliverers. They usually knelt in solemn prayer before they left, & on their return, from that hazardous duty. . . .

Those in the neighborhood of Newbern were ordered to report at my office as soon as they arrived within our lines. They obtained quarters in the out-houses, kitchens and poorer classes of dwellings, deserted by the citizens on the taking of Newbern. They attended our free schools & churches regularly and with great earnestness. They were peaceable, orderly, cleanly, & industrious. There was seldom a quarrel known among them. They consider it a duty to work for the U.S. government & though they could in many cases have made more money at other conditions; there was a public opinion among them that tabooed any one that refuses to work for the Government. The churches & schools established for their benefit, with no cost to the government, were of great value in building up this public opinion among them.

As I have previously related, that the men frequently led foraging parties, to places where supplies necessary for the department were obtained. In this way we obtained boat-loads of pine and oak wood for the hospitals and government offices, a steam boat load of cotton bales for the protection of the gunboats, a number of horses and mules for the Quarter Master Department, and with forage for the same. Sheep were obtained at no other cost than the small wages of the men. Without doubt property far exceeding in value all that was ever paid to the blacks, was thus obtained for the Government.

One of the issues historians have recently studied is the gendering of the relief effort. On plantations, women labored in the fields beside the men. African Americans considered this one of the stigmas of slavery and protested bitterly when Union officers tried to make refugee women dig ditches and the like. Now that they were free, they expected that the divisions between men's and women's work would be honored for them as for all other free people. So I was interested to see that at New Bern, the Union army respected this demand:

The women and children supported themselves with but little aid from the government by washing, ironing, cooking, making pies, cakes &c. for the troops The few women that were employed by the government in the hospitals received $4 a month, clothes and one ration.

One "ration" meaning food for one person over time.

Vincent Colyer spent the rest of the war in other humanitarian pursuits, founding the United States Christian Commission to aid refugees and educate freedmen and freedwomen. It strikes me that one of the mainsprings driving the modernization of the world has been the proliferation of people like Colyer, who when told about a daunting problem – a million refugees in a war zone, say – immediately set to work building an organization to meet the need.

And another has been the desire of people to be treated as human, and the enormous efforts they will put into achieving that goal.