Mount Vernon has a nice web page up showing, with three examples, the different ways enslaved people reacted to the American Revolution. In the North, the Revolution led to the phasing out of slavery for everyone, and in the Deep South to its intensification. In the middle was a muddle: slavery endured, but many people became free, and many more expected that they would become free soon. Thus at Mount Vernon in that time the future seemed open and uncertain, and people responded to war, freedom and slavery thinking their choices might have a big impact on their lives and fates. 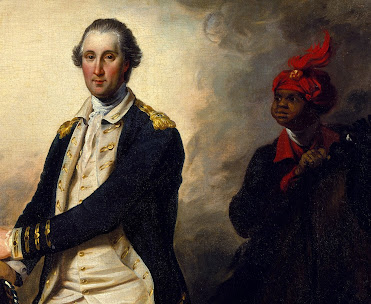 George Washington's most famous slave was William Lee. Washington bought Lee in 1768 when Lee was about 18 and immediately assigned him to household duties, so he must already have had some experience in that type of work. Lee was a mulatto and had come from an estate of the famous Lee family, so most likely he was the child of one of the white Lees and therefore Washington's cousin by marriage.

Lee travelled with Washington wherever the future president went, including the Ohio Valley. He was a skilled horseman and accompanied Washington on fox hunts, galloping wildly after the hounds. In 1775 he went to war with newly minted General Washington and served as his valet throughout the war. He appears in the background of at least two portraits of Washington, holding his horse; he must have been a ubiquitous presence, so that artists who imagined Washington imagined Lee standing a few paces away. Since Washington as a matter of policy never spoke about his private life, the general's fans constantly badgered Lee for personal details, and he learned how to doll out just enough to keep his questioners intrigued without angering his boss, becoming a famous character. In 1784 he married Margaret Thomas, a free woman who had also worked as a servant in the Washington household.

When Lee was nearly crippled by a leg injury Washington paid for him to see the top physicians in Philadelphia and be fitted with a metal leg brace that allowed him to walk again. He was not able to resume his old duties, though, so he became Mount Vernon's shoemaker. He was freed on Washington's death in 1799 and remained at Mount Vernon until his death in 1810. According to other veterans who came by Mount Vernon and reminisced about the war, in his last years Lee drank heavily. 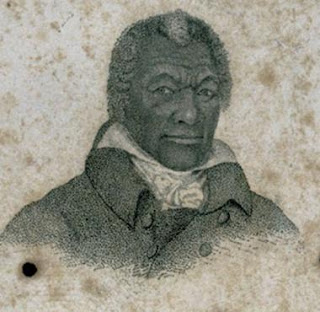 James Lafayette was born a slave of the Armistead family and was raised as a companion to William Armistead, Jr., learning to read and write English and French. When the Revolution broke out James tried to enlist in the Continental Army, but Washington had just decided that only white men could serve. (That changed later when they ran short of soldiers.) So instead James joined the Marquis de Lafayette's force of European volunteers – no doubt speaking French helped him there. When the British under Cornwallis entered Virginia in 1781, James presented himself to them as an agent who could assist with his great knowledge of Virginia. Once in their good graces he began passing intelligence to the revolutionaries about British dispositions around Yorktown.

In 1783 the Virginia legislature passed a law granting freedom to all enslaved men who had served the Patriot cause. At first James was denied the benefit of this law because he served as a spy, not a soldier. In 1787 the Marquis de Lafayette wrote to the Virginia government on Lafayette's behalf, and he was freed. He took the name Lafayette to show his appreciation for this gesture. We next hear of him in the 1820s, when he was living on a 40-acre farm near Richmond, collecting his military pension. Not a bad life, but perhaps less than a well-educated war hero might have expected. The French Lafayette made a famous tour of America in 1824 and James went to hear him speak. The Frenchman recognized James in to crowd, called him to the podium and embraced him, a gesture reported throughout America.

In 1781 the British warship Savage sailed up the Potomac River, and dozens of enslaved people fled to join the British cause. This included 17 people from Mount Vernon, out of about 330 slaves on the estate. During 1780-1781, about 4,500 enslaved people escaped to the British, out of a total enslaved population in Virginia of roughly 250,000.

One of those who fled Mount Vernon was Harry Washington. Washington was 40 years old and worked in the Mount Vernon stables. After he joined the British he worked in various capacities, including digging fortifications around Charleston, South Carolina, but he never fought in a battle.

At the end of the war, Washington was one of the roughly 3,000 black Americans taken by the British to Nova Scotia. Washington had a tough time there and he joined a large group petitioning to be taken to Africa. In 1791 he was one of 1,200 former American slaves who made the journey to Sierra Leone. There he complained about mistreatment by the British leaders of the colony and in 1800 he was tried for insurrection and banished. That was his last appearance in the records.

The differences between these men's lives are striking, but so, too, is the underlying reality that their choices were harshly limited by their race and the slavery they were born into. The Revolution birthed a new nation, but it is open to question how many people got what they wanted from it. White Americans showed their frustration with a series of armed rebellions against taxation and terrible economic times. African Americans had to endure continued slavery and exclusion, mocked by all that talk of freedom. The thousands who did become free began building their own institutions outside white control – churches, schools, communities – where they could feel fully human, something many of their compatriots were trying hard to deny them. There are many fascinating stories African American life in this period but very few with what feels like a happy ending.