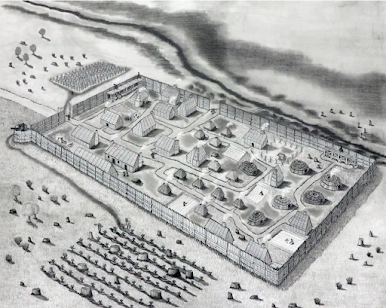 When they established their colony at St. Mary's City in 1634, on land they had purchased from Tayac (high king, more or less) Kittamaquund of the Patuxent Indians, Maryland's founders built a wooden fort. Much like Englishmen had earlier done at Jamestown. They lived in the fort for 8 years before they spread out into the surrounding area, building a very loose sort of town. And also much like at Jamestown, the location of that original fort was forgotten within a century. When archaeologists started poking around St. Mary's City in the 1930s they naturally hoped to find it. But, again as at Jamestown, it took a long time to do so.

Now they have finally found it. This is big news in Maryland archaeology partly because various prominent people have taken stands over the years about where it ought to be, which have turned out to be wrong. The actual location is one of those that people have suggested, but it was ignored because 1) there weren't especially many early artifacts, and 2) it is not the most obvious interpretation of such written records as we have. 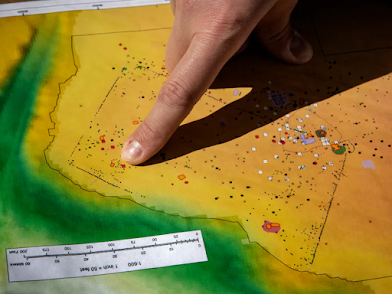 The actual discovery was made by my friend Tim Horsley, the best geophysical archaeologist in North America. Directed to the spot by St. Mary's City archaeologist Travis Parno, Horsley found the fort's palisade using ground-penetrating radar in 2018. Nothing was said at the time, and Parno's crew have spent the past two years ground-truthing Horsley's GPR map.

This has all now been revealed via a story in the Washington Post, and honestly the whole affair seems a bit off. That Post story is the only announcement I can find, and there is nothing about the discovery on the Historic St. Mary's City web site. It looks like they were planning to make an announcement on March 25. Today's story comes with precious few graphics – the only site map is the image above – and no prepared materials. Did they rush out the news because they feared someone was about to scoop them? If so they have only themselves to blame, since they have been sitting on the discovery for going on three years.

But anyway it's wonderful news, and it point toward the future of archaeology in an interesting way. Archaeologists like to dig in the dirt and study the artifacts they find there. Somewhat sadly, that is no longer the cutting edge of the field. Geophysical methods – ground-penetrating radar, magnetometry, soil resistivity – are the way to find things. The study of population movements and the like is now the domain of DNA labs, and increasingly sophisticated methods for dating things like the pigment in cave paintings are superseding archaeological judgment.

And yet here we have the site of Maryland's founding, and likely the excavation of the site in coming years will produce amazing things.

It will be wonderful to see what we learn.