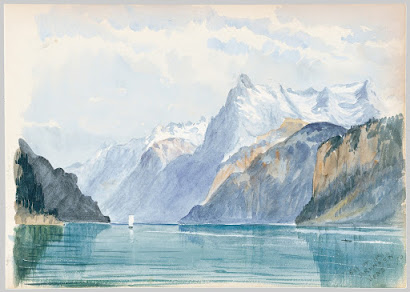 John Singer Sargent was born in 1856. In 1869, 1870, and 1871 his family spent time in Switzerland, and he carried along his sketchbook. The painting above was done in 1870, when Sargent was 14 years old. How is that even possible? That's a pretty big image and I invite you to click on it and be awed. 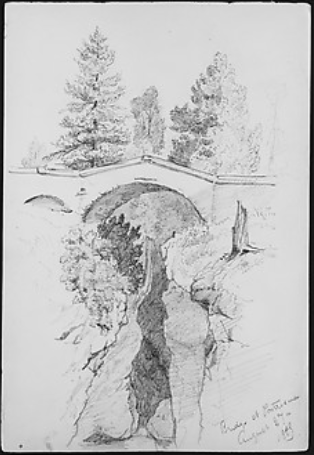 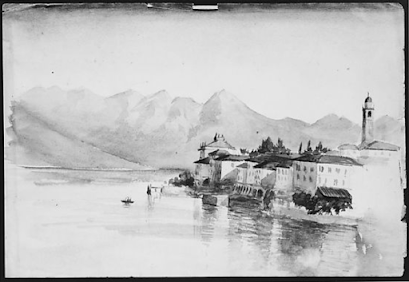 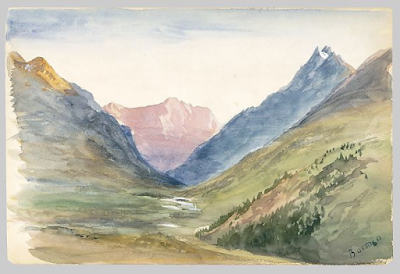 These three were done the year before, when Sargent was only 13. Sargent received no formal training in art until 1874, years after these were done. 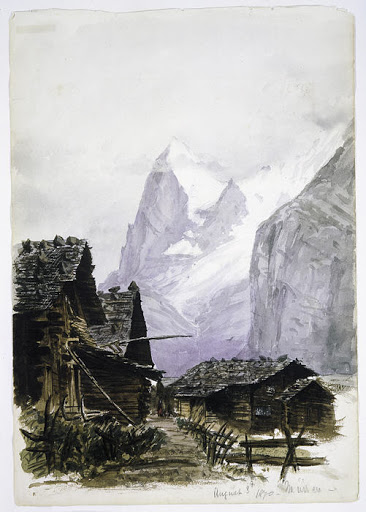 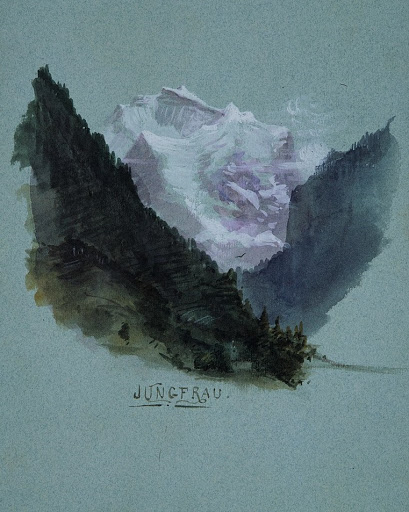 But it's the works from 1870, what were later called Sargent's Splendid Mountain Watercolors, that astonish. Can you imagine this kid walking into some art class and handing this portfolio to his teacher? And it's not like he burned out young or anything; he was still making beautiful art in the 1920s, more than 50 years later. 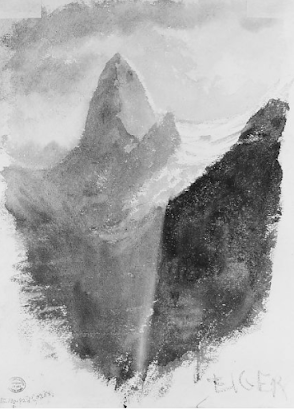 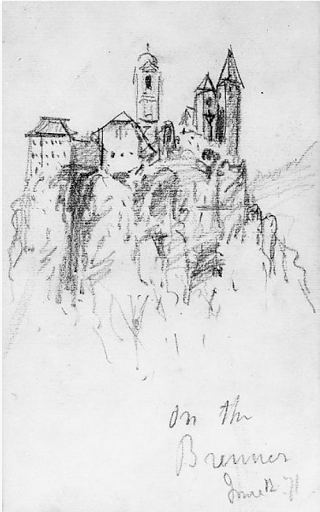 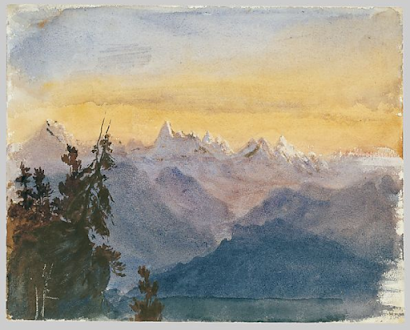 Here's a question: looking at these you can see that some people are simply born with a talent for art. Why? What would the evolutionary significance of that be? In complex societies artistic skill can be a good route to financial and thus reproductive success, but why did hunter gatherers evolve this trait? It is clearly quite distinct from general intelligence or verbal skill. It is its own thing, and wherever it came from John Singer Sargent was just born with a boatload of it.

Here's a question: looking at these you can see that some people are simply born with a talent for art.

I contest this. Painting, drawing, et cetera, while involving some degree of "innate" sense for composition and fine motor skills, is almost entirely a matter of practice. These 1870 works aren't the first ones he did - I would suspect he'd been drawing daily since he was a small child, at which point his works likely looked much like any other child's early scribbles. After 10,000 hours

What makes someone develop into a skilled artists by age 14 is 1) a passion for the work, which not everyone has or can even cultivate; and 2) the time and resources to practice continuously.

A child with a natural desire to draw and paint who lives in a family that can't afford to keep them supplied with paper, pencils, pens, brushes, paint, et cetera, along with all the free time to actually spend on honing their skills, will almost never develop into a young artist.

Likewise, a child given all the tools and supplies and time to work, but who lacks the desire to draw or paint and does not enjoy the process, may see some progress as they work to meet family expectations, but if their heart isn't in it and they lack true passion, they will likely give it up even if they develop the actual skills and techniques to be competent.

And drawing and painting are actually on the low end of the scale of "natural talent" when it comes to competitive fields, since they aren't physically demanding. Many sports not only require intense practice, they also require the proper natural physiology - no amount of practice is going to let a 4' 8" basketball player make it to the NBA, nor will it help a prospective football player who grows up malnourished from a poverty restricted diet.

And of course, there's also the fact that not all practice is equal. Spending a huge amount of time on something, but spending it on things that aren't helpful to improving your skills, naturally doesn't make you an expert. Part of the reason that formal training exists is to focus and direct one's efforts into the area's where they will produce the most good. Sometimes you don't need formal training, if you have a good intuitive grasp of something, but even for a child prodigy who does have that intuition, formal training typically still helps a lot, because it rationalizes and codifies the experience into concrete, communicable concepts and terms, improving efficiency of thought and allowing you to learn from other people faster than you could discover and learn something on your own.

I knew John Sargent the first time I visited Tate Britain in London. One of his painting left me entranced, 'Carnation, Lily, Lily, Rose'. Maybe I can reproduce it here:

It is one of the human unexplained mysteries how creative imagination strikes some and not others. Partly from the cultural ground where one grows up, undoubtfully, but that can not be all, there must be some internal difference in our genes. But my question is not the same as yours: I wonder why this quality is being lost, why there are less and less prodigies and geniuses (none in music, none in painting), is the human race decaying instead of progressing to some better evolutionary stage ?

Painting, drawing, et cetera, while involving some degree of "innate" sense for composition and fine motor skills, is almost entirely a matter of practice.

Haha, the usual Marxist common place, the work is all, individual talent is a bourgeois fiction. No, it's the opposite, and John is quite right, Beethoven was simply born with a talent for art.

You're reading comprehension needs work. You have erected a strawman argument, misrepresenting what I actually said, and pretending I said something else.

Regardless, it seems you need someone to explain to you that Beethoven was born into extraordinary wealth, privilege, and luxury. Had he been the child of a peasant family, he likely would have gone his entire life without even seeing a piano - at that time and in that place, they were mastercraft luxuries of the rich.

Beethoven was the son of a very successful musician, who had ample time and leisure to personally teach his son music from a very early age, instead of having to toil in manual labor to earn his bread. His father also was fortunate enough to have the education to make teaching his son possible, which certainly helped.

His father also had the wealth to arrange for a private tutor to teach young Beethoven about music. In fact, Beethoven had almost half a dozen such tutors. Money and connections certainly do wonders for teaching a child.

Also, the historical record is quite clear that Beethoven's early musical education was grueling and miserable. One of his tutors who suffered from insomnia would actually wake him (a five year old child) in the middle of the night and force him to practice rather than sleep. He suffered frequent emotional distress as a result of his severe training regimen, but had no real choice in the matter. His father was hellbent on reproducing the success of Mozart as a prodigy, to the extent that he even lied about his son's age when promoting his first concert.

Beethoven didn't just wander over to a piano that just happened to be laying around and start playing brilliantly all of his own accord - his supposed "genius" was intentionally and intensively cultivated in him by his deeply ambitious and vicarious father, who arguably treated his own son less as a person and more as a financial investment. The boy clearly hated the whole ordeal, but as a child he had no actual agency - he simply had to comply with the fate thrust upon him.

He spent COUNTLESS hours practicing. His father had blatant motivation to lie about his son's supposed "innate genius", since it was a point of pride and prestige to make such claims. People came to view Beethoven as a child prodigy, because that's exactly what he was marketed as being, by an expert court influencer with everything to gain from exaggerating and overstating his son's "genius".

People often mistake the resources, ambition, and ruthlessness necessary to enable insane amounts of hard work to reach a specific pre-planned goal, with miraculous natural "talent". Kings and nobility were LITERALLY thought to be innately better than other people, when the truth was just that they had enough money to pay people to serve in their armies and enforce their will, and indirectly controlled the food supply of the regions they ruled over (via threat of the aforementioned armies).

Luck and circumstance made Beethoven. His father, Johan, had seven children, but only three of them survived infancy. Ludwig was the eldest of the survivors, and hence the primary focus of his father's efforts to raise "another Mozart". If he had died early on, one his surviving younger brothers would have become the focus of that training program instead, and likely would have produced largely similar results, given that so many other factors would have been the same (teachers, influences, courtly politics, et cetera). So much for "innate talent"

Now yes, not everyone has the same affinity for things. But by and large, with enough ruthlessness and control, you can mold most any reasonably healthy and intelligent child into anything you want. You just have to be willing to treat them like cattle, abuse them, exploit them, and shape them to your whims. There will be some exceptions, certain children who break under the strain, or who find the strength to rebel and refuse to conform, but on average the method works. You can manufacture success, if you have the ample resources and the cruel ambition.

Well, you see people´s lives as "marketed as being" (your words), a most unhuman and basic Marxist approach, and you complain if 'misrepresenting'. I'm not surprised we are in totally opposed fields, our views are incompatible and our discussion useless.

Thanks for your thorough knowledge of Beethoven's life, most of that on Wikipedia or any printed biography. I know about that, and still I see it in a completely different perspective: nothing was predicted at birth or education or opportunities, all was brought up by a sudden sprout, a sudden impulse to music (or other creative 'big bang') that is originated at our inner core as individuals. In the most unpredictable manner.

And so I finish arguing with you. I come here for John's texts, so this is the last time I send you a message, unless lots of things change. In my view, you have a most vicious mind, blundered by socialist-marxist analysis and the extreme left´s collective-oriented vulgata.

LOL LOL LOL
Really you will leave this blog?

Apparently holding dissenting opinions is a mark of viciousness - who knew? Also apparently I'm a Marxist, and unhuman? I guess someone can only qualify as a person if they hold "The Right Notions", hmm?

That said, I'm quite happy to accept the great compliment of no longer receiving your responses. (And being that I'm ostensibly the vicious and vulgar one of us both, it may amuse you to know I will find it refreshing to no longer be the target of your trite and predictable insults and personal attacks.)

To borrow a phrase, I've been called worse things by better people, and while I will miss the wry amusement I get from reading your tritely boilerplate vitriol and abuse, I do think I'd prefer to do without, as that will greatly elevate the civility of the general discourse around here.

Just don't expect much in the way of reciprocity. By all means, pretend I don't exist if that pleases you, but I fully intend to continue offering my usual rebuttals to your more contestable comments, as called for. Some of us have faith in our arguments and convictions without having to resort to abuse. Cheers!