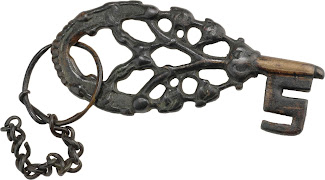 Viking warriors were buried with weapons. Women of status were often buried with keys. This is from the description of the grave of a wealthy couple in Denmark who were buried around 950 AD:

The man was buried with a large battle ax. . . . For her part, the woman in the tomb was laid to rest in a wagon, known to be a typical practice for Viking women of noble birth. Intriguingly, the archaeologists also found two keys buried with the woman. Many Viking women were buried with keys, which symbolized their control over the home and the domestic sphere, including the distribution of food and clothing to the family. One of the keys found in the particular woman’s grave served as, in Nielsen’s words, “a symbol of her power and status as a great lady.” 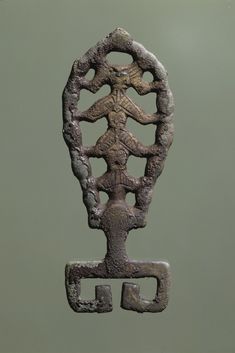 The association of keys with prominent women was not absolute, and a few men were also buried with keys. Certain skeptical archaeologists have used this fact to undermine the whole symbolic association of keys with women, but keys found with men are actually rare, so the association holds pretty well. And the kind of keys you are most likely to see in a museum, with a decorative handle, are only found with women. They were worn on the outside of the woman's clothing so everyone could see her status. 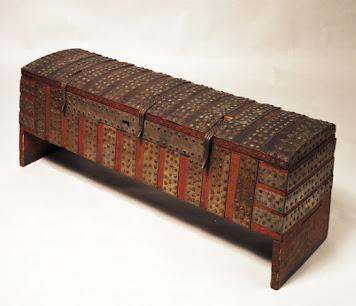 Chest from the Oseberg Ship Burial

To understand the importance of the key you have to imagine a noble Norse household, a crowded place where there were numerous servants, tenants, supplicants, visitors, and so on. Anything valuable and portable was either worn on the person or locked in a chest. As the holder of the keys to the chests, the woman who headed the household controlled access to its valuables, including the money. No major purchase could be made without consulting her. Among the things kept in these chests was cloth, so the key-holding matron also controlled who received cloth for new clothes. 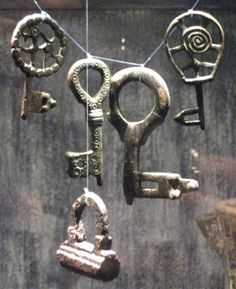 The power of these noble women was real. Viking marriages, at least at the elite level, seem to have been much more equal than in the Mediterranean world. Plus, this was a maritime society in which important men were often gone for much of the year, leaving the women in charge. 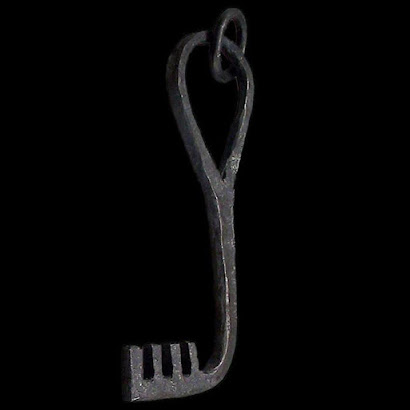 We humans love symbols. It fascinates me that in this world they found complementary symbols for the roles of prominent men and women: an ax to represent the man's prowess in battle, and the key to represent the woman's mastery of the home.
Posted by John at 6:34 PM