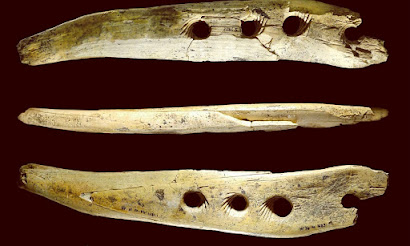 This mammoth tusk with four drilled holes comes from the Hohle Fels Cave in Germany, and is about 40,000 years old. It is about 20 cm (8 inches) long. But what is it?
Probably a tool for making rope. And that is very interesting because rope is one of the most useful of all human inventions. This is Chris Stringer of the Natural History Museum in London, who recently identified other Paleolithic objects from Gough Cave in England as tools of the same type:

A lot of attention has been given to the importance of our abilities to make specialised stone tools and to use fire as being key elements of the prehistoric success of Homo sapiens. But in many ways, the ability to make string and rope out of animal tissue and plant fibres was every bit as revolutionary in its impact at the time. It opened up all sorts of new avenues for exploiting the natural world, from the weaving of baskets to the construction of bows and arrows.

Or attaching sails to boats or a thousand other things.
Posted by John at 2:40 PM

I watched aboriginal women make rope by rubbing stems on their thighs. I thought of the times, weeding, that I accidentally made string from the stems I was pulling. To get to the point that one makes a special tool for rope-making the process must go through many generations of string/rope making.

Probably something else. Rope guides are useful for rope machines. Not required for hand made rope/string/cord. There should be thousands of these in the record if it was indeed required. See video- this is how it can be/ was done: