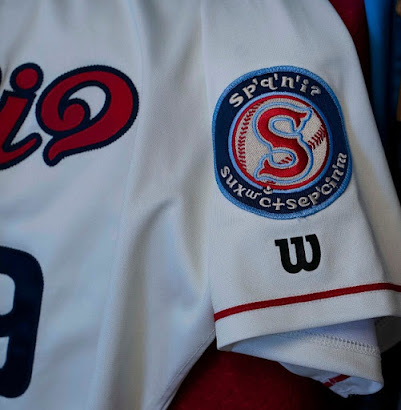 Fascinating article by David Waldstein in the Times about one sports team that is not considering changing its name, baseball's Spokane Indians:

The minor league team in Washington State has been collaborating with the Spokane Tribe of Indians in what it hopes is a respectful manner of honoring the local Indigenous population.

Can that be done? Some say it is not possible, but the Spokane Indians may be as close to an understanding as any team has come.

“They came and listened to the elders, and that is what really developed the relationship over time,” said Carol Evans, the chairwoman of the Spokane Tribal Council, “and it has grown like a family partnership unit, where we have a lot of respect for one another.” . . .

The Cleveland Indians of Major League Baseball said they were having discussions about the “best path forward” regarding their name.

The Spokane Indians have had such talks, too, even volunteering to abandon the name 14 years ago but eventually deciding to keep it with the support of tribal leadership.

Among other things the players have the name Spokane written native style on their uniforms, and signs in their ballpark are bilingual. There are interpretive signs describing traditional Spokane culture, and the team is helping to rebuild the baseball field on the reservation.
It is, as far as I am concerned, a model of how such matters ought to be handled. Respectfully, face to face, with openness to change on both sides. So, of course,

But Suzan Shown Harjo, an advocate for Native American rights who has led the fight against Indigenous team names and mascots in sports for decades, said no matter the good intent, the name should still be changed.

“There is no such thing as respectable treatment of any mascot or team name that has a native theme in sports,” she said. “There is just no such thing, no matter how you package it.”

There are are always ideologues who insist that their abstractions matter more than actual relationships between people. That people of good heart have met face to face and agreed on these things matters nothing to them; they know heresy when they see it, and it must be stamped out.
I have lately read all sorts of statements to the effect that black and white Americans can never understand each other so long as racism endures; it is almost a commonplace in certain precincts. But in America 24% of black newlyweds are married to someone of a different race, and we have more than 600,000 black-white marriages. True, some of them don't understand each other, but then that is true of all married couples and especially all newlyweds. Others, I am quite certain, know each other inside and out, whatever anybody's ideology says.
The answers to our problems will not be found at the level of abstraction and ideology, but face to face; the abstract rule we need more of is Love thy Neighbor as Thyself.
Posted by John at 9:00 AM

There is a similar relationship between the Florida State University Seminoles, and the actual Seminole tribe.

Eh... I'm not so sure the Seminoles are a great example, given their willingness to cynically profit from certain less than wholesome arrangements - they seem to care less about respectful representation, and far more about maintaining profitable arrangements like their monopoly on most forms of gambling. I can only magine their relationship with FSU is based chiefly on getting some sort of cut of the take.