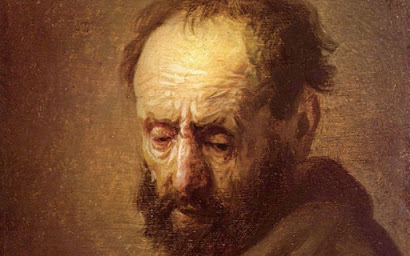 In 1951, somebody gave the Ashmolean Museum at Oxford a postcard-sized oil painting on wood said to be by Rembrandt.

In 1981 it was examined and dismissed as an imitation by the Rembrandt Research Project and hidden away.

“They saw it in the flesh and decided it wasn’t a Rembrandt painting,” Ashmolean curator An Van Camp explained to The Guardian. “They said it might be an imitator painting in the style of Rembrandt and is possibly made before the end of the 17th century, so not even in Rembrandt’s lifetime.”

The painting was placed in the basement

But the painting is now back on display after study showed that it was from the same piece of wood as another, more famous and well authenticated Rembrandt work. (Wooden panels for paintings were made by splitting wood into thin pieces, so you can sometimes line up the irregularities in the wood and show they are from the same tree.)

These people who think they can tell who painted a picture just by looking at it, they are wrong. Of course it isn't a very good painting, but for mysterious reasons that matters not at all compared to who painted it.

40 years passed. It's a lot of time in connoisseurship ability. I call that 'evolution', not 'failure'. Anyway, time once again was the best judge.

Good you mentionned the Ashmolean.

I'd like to go to an art forger's convention and listen to all the fraudsters talk and laugh about their fraudster competitors -- the authenticators. I bet they have some tall tales to tell. It's like those shows that appraise antiques found in garages. "Oh yeah, there's a beauty. Whew Hoo!! Betcha that brings a pretty penny."

When I was getting rid of stuff in my parents's house, the realtor, the assessor, the termite inspector, and a host of others all had relatives or friends who knew what an antique was, and they were more than happy to bring Aunt Edna over for an appraisal. I am the only person I know who thinks an old piece of furniture is just that, an old piece of furniture.

My realtor talked me into letting her take a set of chairs. They were wooden chairs with straw-like woven seats. She said she would take them home, wash them down real good, and then sell them. Three days later she's calling me screaming about a bug infestation in the straw and how they are now in the house.

There you go. That's what happens when you find "antiques" in a house that no one has lived in for three years.

"But the painting is now back on display after study showed that it was from the same piece of wood as another, more famous and well authenticated Rembrandt work. (Wooden panels for paintings were made by splitting wood into thin pieces, so you can sometimes line up the irregularities in the wood and show they are from the same tree.)"

Okay, so it's made from the same piece of wood. That doesn't prove Rembrandt himself painted it!

We're talking about a not very good painting that experts have supposed is done in an imitation of Rembrandt's style? Well the man had dozens of pupils over his life (I'm sure we can narrow it down by year somewhat based on the wood), who would have worked in the same studio with the same materials. Doesn't it seem overwhelmingly likely that one of them painted it, imitating the style of their teacher?

I suppose the 'experts' were serious, scientifically oriented museum experts, not the kind of art business and auctions' swindlers. I much respect the Ashmolean and its team. So, any profane opinion here is just that, an opinion.

let's not go overboard here. The wood was used in Rembrandt's studio by the man himself and at least one other painter. This shows that the Project was mistaken in their dating of the work, but not necessarily their de-attribution.
From the link: "Further studies will be undertaken to ascertain whether it was painted by the master himself."
However, the whole foofaraw does put connoisseurship in a somewhat less-than-flattering UV light. Again.

"However, the whole foofaraw does put connoisseurship in a somewhat less-than-flattering UV light. Again."

I mean... really, the problem is more with out expectations than with the actual usefulness of connoisseurship itself.

Connoisseurship is a simply a tool, and like any tool, it isn't perfect and can't be used to solve all problems perfectly. Misuse it, or expect it to do things beyond what it can be reasonably expected to do, and you're doomed to be disappointed.

Should we expect experts with deep familiarity with a field of study to be able to make highly accurate estimates based on visual appraisal alone? Actually, yes - very much so. But there are certain reasonable limits that one should always keep in mind, and the problem occurs when those limits are ignored, both by the public and sometimes by the experts themselves.

Like any tool, it's best used in conjunction with OTHER tools. Connoisseurship can be tremendously useful for pointing you in the right direction to begin with, but the possible conclusions it suggests then need to be ultimately verified via other more concrete methods.

For example, perhaps an inscribed stone tablet might appear convincingly genuine to the untrained eye, but it possesses details that appear "wrong" which make an expert think it's likely a forgery, but then radiocarbon dating reconfirms its authenticity and raises new questions, and ultimately it is perhaps discovered to be a previously unknown offshoot of some well studied language / culture / whatever.

In such an example, connoisseurship isn't somehow useless because it produced a false positive and labeled the tablet a fake - it's actually utterly vital, because it prevented the tablet from simply being misfiled as just another perfectly ordinary example of what was already known to science, as it first appeared. The distinction might never have been detected if not for the incredibly refined familiarity of a trained expert / connoisseur spotting something subtle.