To the Unknown America 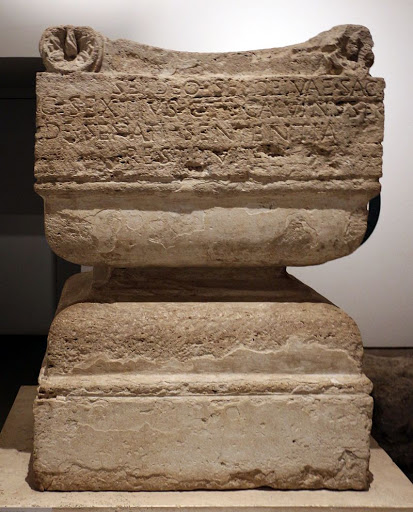 To Ed Simon, putting up statues of heroes is a fraught act, always political and therefore always against somebody or something, and likely to be unpopular at some time in the future. He thinks it might be better to borrow an idea from ancient Greek religion:

In Rome’s Palatine Museum, built atop the excavation site of Emperor Domitian’s palace and not far from imperial residences of Tiberius and Augustus, there is a curious bit of masonry that was rediscovered in 1820. This artifact is exhibited alongside terra cotta heads of Jupiter and marble sculptures of Apollo, all of the grand detritus of a lost civilization housed in a former monastery. At the corner of one of the museum’s galleries sits this short altar chiseled from granite that’s slightly worn from the elements and framed with a modest curled design where a statue might sit. No idol is framed by the base; no statue of strong Jupiter or beautiful Apollo sits atop the altar. It is rather simply dedicated to Agnostos Theo — the “Unknown God.” Where a deity would normally be present is rather a sacred and beautiful nothingness.

These altars were not uncommon in the ancient Mediterranean. The most famous reference to them is in a homily delivered by the Apostle Paul in the Book of Acts, in which he claims that an altar to the Unknown God on the Areopagus Hill in Athens was actually in honor of Christ (the Athenians, ripe for conversion, Paul thought, had yet to fully understand that). Arguments have been made that the altars honored the undepictable God of the Jews, or that they’re a bit of pragmatic hedge-betting for any deities who should be worshiped but that have escaped the attention of the otherwise pious. Regardless of the exact intent of their makers, the altars for the Unknown God present an arresting memorial — the blessing of a lacunae, the sacralization of an absence. . . .

Any statue — be it of Christopher Columbus or Abraham Lincoln, Thomas Jefferson or Frederick Douglass — makes a statement about who is worth preserving in bronze. To make a statue of a recognizable subject is to venture something about that subject, but an altar for nothing argues that its subject is so all-encompassing, so universal, so grand that it can’t be circumscribed in mere stone. Christian theologians speak of a methodology called “apophasis,” whereby the divine is discussed in terms of what can’t be known about it, where definition is always deferred and thought can’t be put into mere words. In some ways the altar to the Unknown God is a form of apophatic sculpture, whereby nonexistence is a heftier material than steel or bronze.

I’d also suggest that the apophatic is precisely the mode in which we should think of our national future, for if God is a lofty subject, then so are “freedom,” “democracy” and “America.” We are better served in memorializing the contradictory, conflicted and hypocritical history of this nation not in monumental equestrian statues punctuating traffic roundabouts but in a humbler idiom that paradoxically expresses an inherent greatness in all the more remarkable of a way.

I am attracted to this idea, and purely negative theology is the only kind I've ever been able to stand. But I notice that many other people find this coldly abstract and long for something more concrete and human. Simon cites the Vietnam War memorial in Washington as a good example of a more negative sort of monument, but so many people hated it that the government was eventually forced to add statues nearby to assuage the critics. After all, venerating heroes goes back to the earliest strata of human myth, and the habit is not likely to disappear because our generation finds it politically problematic.
I could, I think, get behind a plan to replace some Confederate or otherwise offensive memorials with something dedicated to "Those who struggled for freedom" or "Those who yearn to be free", provided the design was not overtly partisan, or just hideous. Right now unspecificity might be the only way to unite people around any image.
Posted by John at 7:37 AM

Great post, John, I read it thrice. You go deep, I like that. The pedestal to the Unknown God gives me some shivers, but on the other hand I think it's only a sign of the Age of Madness we are living now if it may be seen as an alternative monument to our unspecified 'gods'. I prefer to honour History and its heroes like Columbus for what they ment when statues were built. He did discover Cuba, and all the Caribbean, and Central America. That brought lots of knowledge back to Europe. He deserves statues there. "Those who struggled for freedom" is a matter of violent disagreements and ideological confrontation. Do Catalonians struggle for freedom? Do Muslims struggle for freedom ? Do Cuban or Venezuelan opponents ? Did Lenin? I know the English did, under Churchill, now, he merits a statue.