Crop Domestication in the Amazon 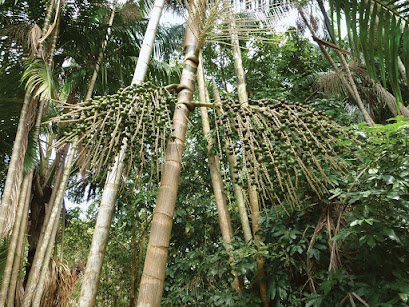 As I have written here before, there is a raging debate about the ancient peoples of the Amazon, and thus about to what extent the great rain forest is "natural". One reason the debate continues is that Amazonia is a terrible place to do archaeology: there is little stone, so most tools were made of wood and bone, which don't survive in the intense heat and rot. There are few places where deep soils accumulate along rivers, so the remains of the whole past are mingled together in the shallow surface layer.

Nonetheless knowledge is slowly building up. Something of a consensus has emerged among archaeologists that farming in the region began by 2000 BC, and that dense populations developed in some parts of the region, surviving until the arrival of Europeans and their diseases. Seeking to learn more about these people who left little behind but some earthworks and a lot of boring brown pottery, archaeologists are now looking to a new kind of evidence: the forests themselves. This is from a new paper by Charles Clement and a bunch of others:

During the twentieth century, Amazonia was widely regarded as relatively pristine nature, little impacted by human history. This view remains popular despite mounting evidence of substantial human influence over millennial scales across the region. Here, we review the evidence of an anthropogenic Amazonia in response to claims of sparse populations across broad portions of the region. Amazonia was a major centre of crop domestication, with at least 83 native species containing populations domesticated to some degree. Plant domestication occurs in domesticated landscapes, including highly modified Amazonian dark earths (ADEs) associated with large settled populations and that may cover greater than 0.1% of the region. Populations and food production expanded rapidly within land management systems in the mid-Holocene, and complex societies expanded in resource-rich areas creating domesticated landscapes with profound impacts on local and regional ecology. ADE food production projections support estimates of at least eight million people in 1492.

By this time, highly diverse regional systems had developed across Amazonia where subsistence resources were created with plant and landscape domestication, including earthworks. This review argues that the Amazonian anthrome was no less socioculturally diverse or populous than other tropical forested areas of the world prior to European conquest.

The evidence is complex and all of this is controversial. One discovery is that while the oldest evidence for the domestication of many tropical plants comes from coastal Mexico (hot peppers, cacao) or coastal Peru (sweet potatoes), the wild ancestors of those plants live mainly in the Amazon. Thus, say the authors, it makes sense that they were domesticated in Amazonia. (Other scenarios are possible; our strawberries come from the New World but were first successfully domesticated in Europe, having been brought over as wild plants.) Also, many areas of the Amazon forest show signs of having been intensely managed in the past. Archaeologists learned about these practices by talking to Amazon natives who still do this. Areas that look to the untrained eye to be wild forests turn out to be semi-tamed by practices like selective burning, cutting down undesirable trees, encouraging useful plants, killing predators, and so on. These authors believe that vast stretches of the Amazon were manged in this way; for example, they think the Brazil nut tree was very rare before people came along, and its presence in what amount to groves across the region is due to human action. "Wild" stands of the acai palm (photo at top) are now considered a reliable sign of nearby prehistoric or early historic villages.

Language also provides another kind of evidence. We know that in East Asia and North and Central America the languages of early farming groups spread widely into other areas, and languages native to early farming areas area widely distributed across Amazonia.

Taking this biological and linguistic evidence together with the ever growing archaeological record makes me more convinced that there was a large human population in the Amazon, and thus that Amazonia is in no sense an untouched wilderness. In fact in may be time to retire that whole way of thinking about the natural world.