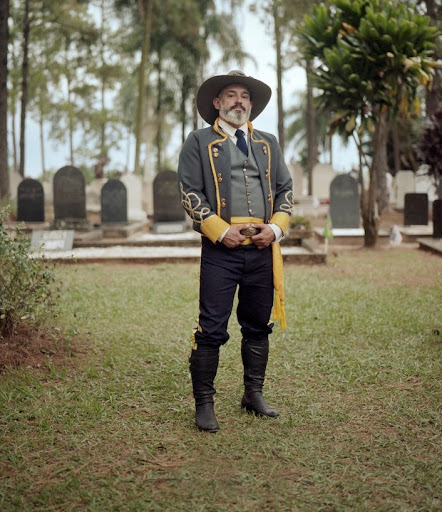 In the Washington Post, Terrence McCoy calls our attention to the growing ferment over the commemoration of Brazil's Confederate past:

To Marina Lee Colbachini, it was a family tradition. Each spring, she would join the throngs who descended on a nondescript city in southern Brazil, don a 19th-century hoop skirt and square dance to country music.

The theme of the annual festival: the Confederate States of America.

It’s one of history’s lesser-known episodes. After the Civil War, thousands of defeated Southerners came to Brazil to self-exile in a country that still practiced slavery. For decades, their descendants have thrown a massive party that now attracts thousands of people to the twin cities of Americana and Santa Bárbara d’Oeste to celebrate all things Dixie. The Confederate flag? Everywhere.

At least 8,000 former Confederate citizens, some say 20,000, emigrated to Brazil after 1865. They sought cheap land, distance from the hated Yankees, and above all to own slaves again and bring back the world they had just lost. The newspapers called it “Brazilian fever.” The exodus ceased in 1888, when Brazil abolished slavery.

Brazil has different racial traditions than the US, and of course Los Confederados were a lot less important in Brazil than they had been in the US. So the issue of their flag has been pretty much ignored. Until now:

Brazilians in recent weeks have demanded the removal of the notorious statue in São Paulo of a 17th-century settler who enslaved indigenous people. Protests for black equality have rumbled through several cities. And in Americana and Santa Bárbara d’Oeste, the cities founded by the Confederates, Brazilians who have never been to the United States are increasingly asking questions piercingly familiar to Americans: Where should the Confederacy be remembered — on a flagpole, or in a museum?

Interestingly one activist told McCoy that she began to think about the flag after the murders committed by Dylan Roof, which led to the flag being taken down in South Carolina. The argument over the flag is just getting under way, so there is no resolution, but I think it an increasingly globalized world it is not likely to remain flying on public property anywhere.

The damning thing is, there's absolutely no reason these people can't "don a 19th-century hoop skirt and square dance to country music" without also celebrating slavers. We're all allowed to choose the parts of our heritage we want to carry forward with us into the future, and which to discard.

I've personally known some of the most Dixie-loving, redneck, salt-of-the-earth folks you can imagine who totally wrapped up their personal identities in things like NASCAR, cowboy hats, raising hogs for the state fair, and all the rest, but who still had absolutely no difficulty reconciling that cultural heritage with a deep and fervent loathing of slavery, bigotry, and injustice. And this is not remotely a NEW phenomenon - you can find such people all the way back to the Civil War and beyond.

My neighbors conform to that “redneck” description and dote on their multiracial grandchildren. In this county, which closed it’s schools to prevent desegregation, I see a multitude of interracial families who, by their actions, appear to be racially un-bigoted. Even so, I think that the death by a thousand cuts, the micro-aggressions, still exist. Rarely do cultures move quickly. Vestiges, like ghost limbs, continue to do harm. My nieces, of oriental extraction, suffer from these constant, low-level attitudes. Prejudice seems to be a human trait.