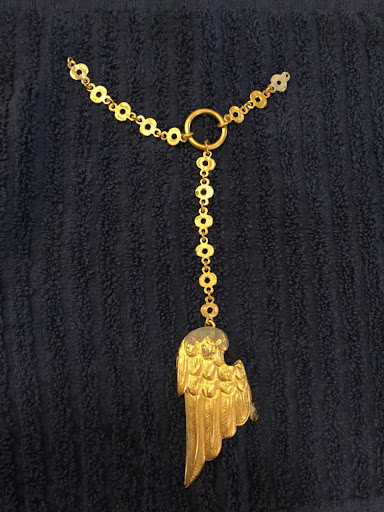 Pelican wing necklace from a 16th-century Spanish shipwreck off Florida
Strange story from the LA Times in which the LA police chief disciplines a bunch of his employees for acting like a gang, including having an off-duty brawl with members of Los Banditos.
Two-minute video taken in 1902 from a suspended train line in Wuppertal, Germany, like drone footage 118 years old. The train is still running, by the way.
Forgiveness therapy.
Amboseli National Park in Kenya is reporting an "elephant baby boom," with 170 calves born so far this year, including two sets of twins.
Changing the lyrics to "The Night they Drove Old Dixie Down" (I had to explain to my mystified children that in 1969 this was a protest song and Joan Baez a leftist.)
More protests in Thailand, where student activists are denouncing the ruling junta and also calling into question the powers of the monarchy. Thailand's oscillation between democracy and military rule looks set to continue, with no real stability in sight. (Washington Post)
In central Germany, a plague of field mice is causing significant damage to crops.
Between 1964 and 1973 the US flew 580,000 bombing missions over Laos, one every eight minutes for nine years. By some counts this makes Laos the most bombed country in history.
The Roman Emperors Project: Daniel Voshart has created photorealistic images of every Roman emperor to 285 AD.
Popcorn popping in ultra slow motion.
Notebooks of a 19th-century English shipwright, full of sketches of his work and people he met.
Price fixing and criminal trials in the canned tuna industry.
California's rolling blackouts show the difficulty with phasing out nuclear power plants and trying to dramatically reduce carbon emissions at the same time.
Bizarre illustrations of demons from a 1921 Persian book on magic.
Posted by John at 7:42 AM

"Between 1964 and 1973 the US flew 580,000 bombing missions over Laos, one every eight minutes for nine years. By some counts this makes Laos the most bombed country in history."

"Bizarre illustrations of demons from a 1921 Persian book on magic."

I was expecting something more outlandish. These are very much in keeping with Hindu art influences.