Bernie Sanders and the Establishment 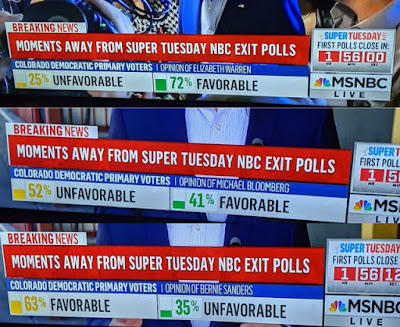 There's this thing about Bernie Sanders and his supporters that I find very strange. They set themselves up as rebels against the establishment, which they call a cabal or worse and promise to "destroy," and then get indignant when the establishment fights back. They are, for example, constantly complaining that the media ignores Bernie and finds ways to downplay his successes. One of my sons told me about the color-coding switch above. That and the post below come from r/bernieblindness," documenting the intentional media blackout of Bernie Sanders and his campaign." A typical post:


During the time biden was far ahead in the delegate count before california, when googling primary results, you got a bar graph of the delegates. as soon as cali came in, they changed to a list without a graphic. Posted byu/sarcasticallyabusive

There are lot of amusing miscues on the site, but the people who count mentions on the tv news and column-inches in newspapers say it isn't true, and Sanders' media coverage has roughly matched his poll numbers. It certainly seems to me that Sanders got a lot of coverage between Iowa and Super Tuesday when he was in the lead. And even if Bernie's complaints were true, why would you think the "corporate media" would cover you fairly after you spent all day savaging them?

Today we have been treated to a lot of this:


If Biden wins the nomination, it will be a real lesson in how power works. Bernie was on track to win, Biden had no campaign, and they all knew it. So a few phone calls were made behind the scenes to Amy, Pete, Beto. Several million was put into a pro-Warren Super PAC. Voila!

Um, no, it isn't that easy. But, you know, there are reasons why so many Democratic Party leaders have endorsed Biden: first, they like him. Second, Biden has been playing the party insider game for forty years: attending other candidates' fund raisers, sharing his donor lists, endorsing their campaigns, helping them get riders added to bills, etc. So when he called on them for favors, they said yes. Is this puzzling? As Ezra Klein pointed out, persuading people like Amy Klobuchar and Mike Bloomberg to support you is exactly what a Democratic president has to do to get anything done, and Sanders has so far been completely unable to do it:


Sanders’s supporters have been furious, for weeks, that Warren hasn’t dropped out and endorsed Sanders. What they haven’t done is ask why Sanders hasn’t been able to convince her — or any of the major Democrats who have already dropped out — to endorse him. Whatever case Biden is making or deals he’s offering, Sanders isn’t matching him. Or perhaps the well has been poisoned by Sanders supporters filling Twitter with tweets calling Warren a snake and the Democratic establishment a cabal.

Ok, so you want a revolution. For that, you need an outsider candidate like Sanders. I understand that. But if you're going to attempt a revolution, shouldn't you assume that the people in power are going to oppose you? Did you think the establishment was going to meekly roll over and let you win?

If you want a revolution, you should stop complaining that the establishment treats you unfairly and beat them. If you can't, if you're stuck fighting to make the world better one election and one spending bill at a time, don't despair. Change comes with maddening slowness, but if we fight for it it will come.
Posted by John at 7:07 PM

The worst signal is that the candidates appeal to vote mainly 'against Trump', 'to defeat Trump'. That is a third world political aim, to defeat the 'other'. You can only have intelligent, lucid, warm hearted votes if you conquer them with vital political issues: the climate of course, immigration, health care, economic growth, international affairs. That is what I want to hear from Sanders or Biden, and I can't get it. So I don't care; why is Trump so much worse after all?

If you want Trump out you have to vote for an octogenarian.

Glenn Greenwald wondered aloud today what's going to happen now that the media will start focusing on Biden's gaffs? I want to see him on the debate stage when it's just him and one other for an hour plus. Nice guy, though. Enjoy your Super Tuesday victory, I'm not sure how long it will last. Voting for the candidate you think will most likely beat Trump is the strategy most likely to keep voter turnout down, and I bet if you asked 100 people, no two could agree on what policy positions and personal characteristics this candidate must have to beat Trump.

One of my sons told me about the color-coding switch above.

This sort of thing should be flagrantly illegal. The fact that we tolerate this kind of manipulation and corruption in our democracy is a sign of how deeply broken our system is. We should be enforcing the highest possible standards of quality in regards to our democratic system, and instead we allow abuses like this as nearly every level.

And even if Bernie's complaints were true, why would you think the "corporate media" would cover you fairly after you spent all day savaging them?

Because we ostensibly live in a society that values truth, justice, and the American way? Because there's such a thing as integrity, fairness, and principled behavior? Because our democracy depends fundamentally on people placing the needs of our Republic and citizens above their own naked greed and avarice, and when that stops happening the entire apparatus begins to malfunction and cause catastrophic harm to innocent people?

Um, no, it isn't that easy. But, you know, there are reasons why so many Democratic Party leaders have endorsed Biden: first, they like him. Second, Biden has been playing the party insider game for forty years: attending other candidates' fund raisers, sharing his donor lists, endorsing their campaigns, helping them get riders added to bills, etc. So when he called on them for favors, they said yes. Is this puzzling?

It's not puzzling, but it is morally bankrupt. The fact that the most basic operations of our political parties are founded in bald nepotism and cronyism should be deeply troubling to us, and yet most Americans just sort of shrug and ask, "What can we do about it? That's just the way things work!"

I get where the Bernie crowd are coming from, even if I personally find Sanders himself and his supporters to be utterly infurtiating unworthy of my trust.

I appreciate that you inevitably have to deal with the world as you find it, not as you wish it were - and I very much do fault Sanders and his ilk for being so detached from reality and blinded by idealism untempered by reason.

But at the same time, I must equally fault people who act in the opposite manner - being so detached from hope and blinded by reason untempered by ideals.

I bristle with indignation at all the people out there who just turn a blind eye to all the abuses and excesses of our political system, and who defend the status quo so doggedly, utterly unwilling to acknowledge just how abhorant and abominable our current situation is. It's one thing to be pragmatic in trying to work within the system as it currently exists, but it's another thing entirely to refuse to admit that things desperately NEED to change, and that by not doing more to change things we are inherently complicit in gross injustice.

At some point you have to ask yourself where, exactly, the line between "working within the system" and "actively collaborating with evil" actually falls.

And the thing is, there's a massive difference between doing what you have to in order to survive in a terrible situation where you have no power, and being complacent in your own comfort and security while turning a blind eye to others who need help that you could give. Middle class Americans aren't living in Nazi occupied France, forced to render aid to jackbooted Fascists under threat of death - they're luxuriating in a degree of comfort and privilege that millions of their less fortunate fellows can frequently only dream of, and yet they don't even have the decency to use their privilege to speak out on behalf of the poor and hopeless.

This is why Centrism infuriates me so damn much - it's predominantly a bunch of well off middle aged white people arguing that we just need to let the slow march of progress continue inching along at the current rate, and pay no mind to all the human lives caught in the gears of the social apparatus as it tortuously plods along, grind their bones to dust. Best not to rock the boat, after all!

I get it - the majority of Democrats have no faith in Sanders. I agree that they shouldn't! But I also argue that they need to be doing FAR more to find someone else who they CAN put faith in, and for better reasons than just their being good at collaborating with the people who want to drag us back into the Stone Age.

"This is why Centrism infuriates me so damn much - it's predominantly a bunch of well off middle aged white people arguing that we just need to let the slow march of progress continue inching along at the current rate, and pay no mind to all the human lives caught in the gears of the social apparatus as it tortuously plods along, grind their bones to dust. Best not to rock the boat, after all!"

This is pure "I live in a political bubble" speak.

An excellent demonstration of my point.

No willingness to acknowledge even the possibility of valid points being made, no effort toward tring to find common ground or see things from the opposite point of view, just a flat dismissal out of hand, arrogant and condescending to the supreme.

I'll say it again - reason untempered by idealism is just as destructive as idealism untempered by reason. The only difference is that it spreads the harm out over long periods of time, rather than concentrating it in sudden outbursts.

The problem is that you 'non-centrist' people have a hidden agenda: a state left-wing almost dictatorship. There is no other way off moderate centre liberals, if Trump is out of question.