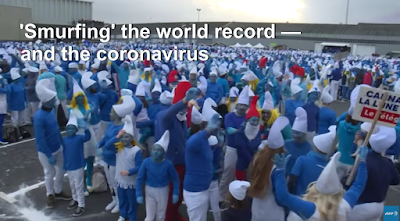 Some things can't be made up:

On Saturday, thousands of people dressed as Smurfs gathered in Landerneau, France to try to break a world record. The mayor of Landerneau defended the decision to hold the rally despite concerns about the coronavirus pandemic.

More than 3,500 Smurf cosplayers gathered over the weekend in an attempt to break the Guinness World Record for the largest group of people dressed as Smurfs. Last year, the award was given to a group of 2,762 who gathered for a carnival in Lauchringen, Germany.


"We figured we wouldn't worry and that as French people we wouldn't give up on our attempt to break the record, and now we're champions of the world!" One attendee told the AFP news agency. "There's no risk — we're Smurfs! Yes, we're going to Smurfise the coronavirus!"

"It was more important, the coronavirus is no big deal, it's nothing," another said. . . .

On Tuesday, Landerneau Mayor Patrick Leclerc defended the decision to hold the event, which he said was necessary to alleviate the "ambient gloom" around the country. "We must not stop living. It was the chance to say that we are alive," he told AFP.

A few years ago when there were those bombings in Paris, the response was much the same - people refused to be terrorized, and went out to the clubs and cafes and whatnot almost as an act of defiance. To paraphrase one of the comments I half remember from a news story at the time, the argument was that "The best revenge is to live well", and so they went right back to living, and said no to fear.

That said, while that's an admirable sort of notion when dealing with terrorism, as the risk of further harm occuring in the aftermath is virtually nill and the power of terrorism is in making people fearful even when they are safe, I'm not sure it applies to a global pandemic where the risk is still very real and gatherings like these don't just jeopardize the health of those who attend, but others as well.