Children of the Spanish Flu 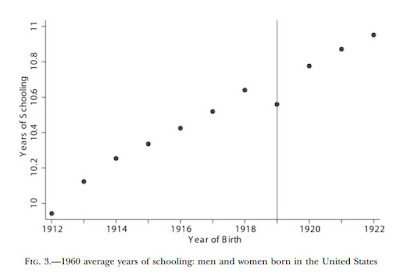 Fascinating piece by Alex Tabarrok, following up on some work by Douglas Almond, about the impact on the 1918-1919 flu pandemic on the future lives of people who were in utero when the flu struck:


Fetal health is found to affect nearly every socioeconomic outcome recorded in the 1960, 1970, and 1980 Censuses. Men and women show large and discontinuous reductions in educational attainment if they had been in utero during the pandemic. The children of infected mothers were up to 15 percent less likely to graduate from high school. Wages of men were 5–9 percent lower because of infection. Socioeconomic status…was substantially reduced, and the likelihood of being poor rose as much as 15 percent compared with other cohorts. Public entitlement spending was also increased.

This makes me think of all the folklore surrounding pregnant women and what they shouldn't see or experience, you know, that it will damage the baby if the mother experiences a severe fright. Maybe they derive from experience with disease, remembering that most people have had no clear way of separating infection from other kinds of harm.

I also wonder about the impact on whole populations where conditions like severe intestinal parasites were endemic.
Posted by John at 8:39 AM