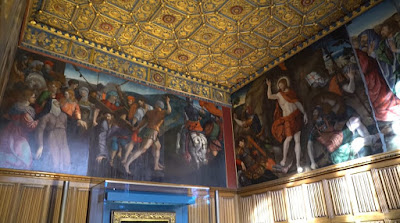 Hampton Court Palace was mostly built by Cardinal Wolsey before his inability to get Henry VIII a divorce led to his fall. After Wolsey was out of the way the king took over the place and completed the construction. This particular room has Wolsey's motto (DOMINVS MICHI ADIVTOR) running around the frieze and it has always been associated with him; these days it is known as the Wolsey Closet. 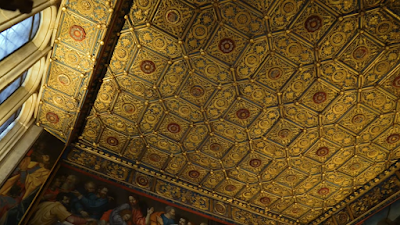 As this video explains, the conservation staff at Hampton Court have recently been working on the ceiling. 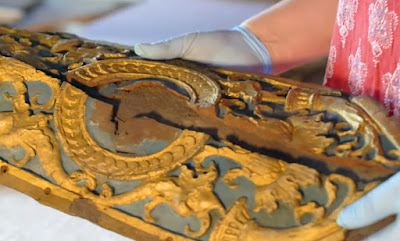 They discovered that it is mostly original to the Tudor period, and that is made of sawdust mixed with glue, pressed into molds and then painted, which is a technique I never heard of until just now. There's something to ponder next time you're in a Renaissance palace; the gorgeous paneling might be made of sawdust and glue.
Posted by John at 5:30 PM