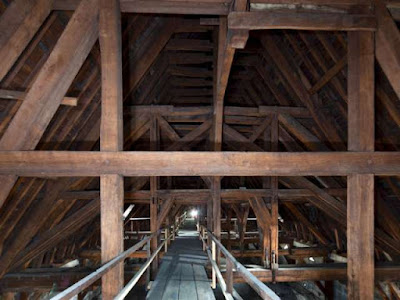 I am frankly baffled by the notion that the roof of Notre Dame might be rebuilt using wooden beams.

I suppose it would in some sense be more historically accurate, but all of the original wood is gone, and modern wood would not be the same any more than steel would. Plus, the focus of any historical reconstruction should be on the experience of visitors, and nobody went into the attic.

Most of the cathedrals rebuilt after the World Wars have roofs supported by steel beams, including the famously beautiful one at Reims. So far as I know, nobody complains about the lack of authenticity.

Steel roof trusses are safer, stronger, and cheaper. It is true that in some kinds of fires thick wooden beams actually work better, retaining more of their strength when heated but not burned through. That only applies to particular situations, though; in general, as you would expect, steel is more fire-proof.

And then we get to the biggest objection to a wooden roof: where would the wood come from? Medieval technology relied on very thick beams cut from very old trees. By the later Middle Ages special forests had to be set aside all over Europe, usually owned by the crown or the church, where oak trees would be allowed to grow for a century or more to provide that crucial wood. In France today there are, experts say, not enough old oak trees to supply the necessary beams. I am not sure if this includes the trees growing in national parks, but since the point of those parks is to gradually recreate Europe's ancient forests, cutting out the best trees seems like a terrible idea.

It isn't just a matter of going to the lumber yard; a whole forest of ancient oaks would have to be cut. How can that be a good idea when we have a perfectly acceptable substitute? Rebuild in steel. 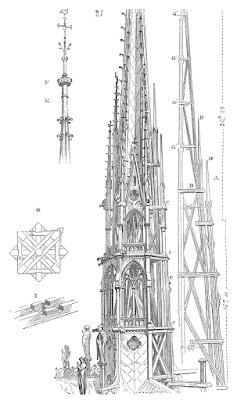 Oh, while we're on the subject of rebuilding Notre Dame, I think that if they're going to have a contest for the design of the new spire, they should let Eugène Viollet-le-Duc enter posthumously. Let's see if any contemporary architect can do better than his design.
Posted by John at 10:07 AM

Twitter is showing many tweets like this one, people graciously offering the sacrifice of their valuable old European oaks and sometimes millions of dollars. Someone needs to plan and direct all the good will efforts. I agree that the trees would be better used maintaining other projects like historic ships and other places where only wood is needed.

Today we have pledged to help support the rebuild of #NotreDame cathedral alongside some of the UK's most famous estates by donating #British oak. Over 100 @Historic_Houses have expressed their support to donate their trees, planted for timber centuries ago.
Historic Houses, Doddington Hall, Visit Lincoln and 4 others
8 replies 19 retweets 56 likes

I absolutely agree - structural beams that no one will ever see should be made out of practical materials. If modern steel had been readily available back in the day, the original builders most certainly would have used it here in place of oak.

No one would insist on using candles to light the cathedral when modern electrical wiring and lighting is available to us. No one would argue that Notre Dame should go without running water or restrooms because indoor plumbing isn't an original feature. So why insist on building an unseen structural element out of wood for no good reason?