DNA from a Mass Grave of Crusaders 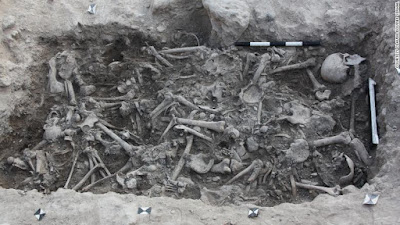 DNA has been recovered from the skeletons in a burial pit in Lebanon dated by artifacts and radiocarbon to the 13th century, when the nearby Castle of St. Louis was a stronghold of the Crusaders. The men in the pit had all met violent ends. The researchers:


were able to recover DNA from temporal bones and perform whole-genome sequencing to confirm that the men were Crusaders -- quite a feat considering that the bodies had been burned and buried in a warm, humid climate. Both factors cause DNA to degrade.

The researchers weren't expecting the diverse origins of the men. Some were from Spain and Sardinia, four were locals who were probably recruited to fight, and two carried mixed genetics indicating that they were the result of relations between Crusaders and locals.

"Our findings give us an unprecedented view of the ancestry of the people who fought in the Crusader army. And it wasn't just Europeans," said Marc Haber, first author of the study and a postdoctoral fellow at the Wellcome Sanger Institute, in a statement. "We see this exceptional genetic diversity in the Near East during medieval times, with Europeans, Near Easterners, and mixed individuals fighting in the Crusades and living and dying side by side."

Quite interesting.
Posted by John at 1:39 PM

Why would the researchers not expect to find this kind of diversity?

You had military contributions from most of Europe; you had adventuring nobles establishing their own duchies and kingdoms out of seized cities and fortresses with the intent to remain permanently; you had religious war which would have attracted local religious minorities to the side of the Christian crusaders... it really doesn't seem at all surprising to me that you'd find Spaniards, Sardinians, local Lebanese, and even some mixed ethnicity individuals all in the same Crusader burial pit.