Professor, How Historically Accurate is Game of Thrones?

Apparently students ask this all the time. So here is my answer:
On the other hand 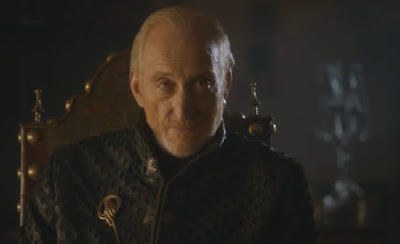 Strip away the fantasy elements and Game of Thrones is a lot more accurate to the spirit of the Middle Ages than many allegedly more historical works, like "Braveheart" or Kevin Costner's "Robinhood."
Posted by John at 7:10 AM

I haven't watched the series, but I read the first three or four GoT books, and I'd strongly agree with most of your list here. I would quibble with one point, the issue of premodern timescales. While "time out of mind" might mean 2 or three generations back for locals asked about their immemorial customs, or for dynasties in the time of Hugh Capet, by the time you get to the 13th or 14th century, the interest in longer timescales had well passed the "a few monks" mark. Some of this involved mythmongering, but it could also be surprisingly accurate and even documents-based (even if the documents were often, but not always, forgeries). Royal histories like the Heimskringla could go back millennia, and collections of bishops' gesta and town histories likewise. The later Capetians and the Valois spent a lot of time harping not only on their mythical Trojan ancestors but also on "Saint" Clovis, his anointment at Rheims with the heavenly ampule, etc., etc. Ditto for Spanish kings (mainly, Alfonso X) who packed their "general chronicles" with Romans and Visigoths. Cartularies--and the habit for this was not just a monastic one--went back as far as the secretaries could take them.

I suppose one could also point at that any series trying to model the Middle Ages past about 1200 would have to include plenty of room for corporate towns, the corporate church and its privileges, bankers, heralds (for the genealogies), and lawyers, lawyers, lawyers. But I doubt any TV series that tried to model these things would make it past the pitch stage.

I'm not complaining--as you say, the series is brilliant at modeling the basic aristo outlook, centered on lineage and family ambition.

I wrote this after hearing, in an early episode of the show, which two of my children are watching now, Jon Snow say "The Night Watch has been guarding the Wall for 8,000 years." Only later did I start to think about all those genealogies that stretch back to Adam. Yes, in the later Middle Ages some people, mostly in the pay of kings, started thinking about things like Brutus fleeing to Britain after the sack of Troy.

Remembering this I started wondering, did that sort of thing ever matter? I can think of a couple of times when it did: when the French reached back to the Salic Law to deny Edward III their throne, and when the Scots cited their long history of freedom in opposing conquest by Edward I.

Yet the time scale of Game of Thrones is still crazy. People still talk about the Andals and the First Men, even though the Andals invaded Westeros between 2,000 and 4,000 years before Aegon the Conqueror. The Japanese invaded Japan on about that time scale and many of them are still in denial that they didn't somehow spring from the soil of their home islands. They certainly have no memory, even in myth, of ever having lived elsewhere. Some of the characters of Westerosi myth, like Bran the Builder, are supposed to have lived 10,000 years in the past. It's a bit of a stretch.

Yes, of course the Westerosi timescales are not medieval ones. You won't get any argument from me about that. But I think it exaggerates the issue in the opposite direction to say medieval people only thought in terms of a timescale of decades. So far, we've both missed perhaps the most obvious point, which is that, certainly by 1200, millions of people across Europe were well aware of a lot of the most basic Bible stories, most of all the Passion, and I'd have to see seem pretty convincing evidence that most of them weren't aware that those things had taken place a thousand+ years before, or that it would have been a real challenge to their thought structure to have that explained to them. Anyone who heard the opening verses of Matthew with even a modicum of understanding would be aware of the idea of timescales that were quite long indeed.

Remember how much it mattered to holy land pilgrims to walk where Jesus walked, to see the tombs of the patriarchs, etc. And, for "national" identity, how important it could be to establish that Christianity had been brought to one's country by one of the apostles.

To bring in another culture, Arabs were most assiduous about taking their genealogies back people who had lived in Muhammad's time, or generations before (and in the case of Muhammad himself, back to Abraham).

A fleet of "a thousand ships" is an absurdity, like an army of five million men. And you can't build any ships on bare islands without trees.

The bare islands without trees bit is accurate, but a fleet of a thousand ships isn't THAT absurd. The Venetians built a fleet of five hundred ships in a single year in preparation for the Fourth Crusade.

True, it required them to halt most of their commerce for the year to do so, and tied up all their arsenal resources, and it nearly ruined them when the German princes who had placed the order sheepishly admitted they hadn't managed to raise all the money they had promised to pay the Venetians for the fleet...

...but all of that noted, a fleet of "a thousand ships" was entirely within the realm of possibility, assuming you had the money to pay for it and the men to make use of it. The Venetian fleet of 500 ships was priced at 85,000 silver marks and was meant to serve an army of 33,500 men, so anyone who could amass 170,000 marks and 67,000 men for the purpose could have comissioned the Venetians for a thousand ships, and gotten them delivered within two years.

True, that's a high price and a large army for the time, but not absurdly so. A coalition force of only a few larger powers could easily meet those numbers, if they were so inclined. Unlike amassing a force of 5 million men - that was flatly impossible before the modern age, even for the powerhouse that was Ming China.

@G the largest European fleet that fought a battle in the whole period between Actium and the 17th century was that of the Holy League at Lepanto, which had 212 ships and about 70,000 men. Assembling this force stretched both Spain and Venice to the limit. If the Venetians really built 500 ships in the 13th century they were mostly thrown-together transports, more like the D-Day "fleet" that one built for fighting.