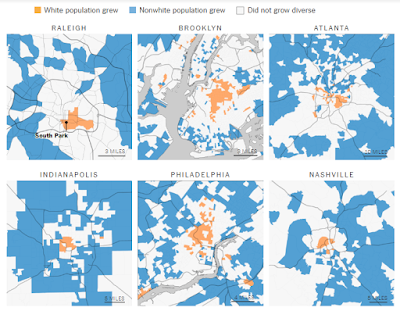 Here, and in the center of cities across the United States, a kind of demographic change most often associated with gentrifying parts of New York and Washington has been accelerating. White residents are increasingly moving into nonwhite neighborhoods, largely African-American ones.

In America, racial diversity has much more often come to white neighborhoods. Between 1980 and 2000, more than 98 percent of census tracts that grew more diverse did so in that way, as Hispanic, Asian-American and African-American families settled in neighborhoods that were once predominantly white.

But since 2000, according to an analysis of demographic and housing data, the arrival of white residents is now changing nonwhite communities in cities of all sizes, affecting about one in six predominantly African-American census tracts. The pattern, though still modest in scope, is playing out with remarkable consistency across the country — in ways that jolt the mortgage market, the architecture, the value of land itself.

In city after city, a map of racial change shows predominantly minority neighborhoods near downtown growing whiter, while suburban neighborhoods that were once largely white are experiencing an increased share of black, Hispanic and Asian-American residents.

Of course the sort of change taking place in formerly black, inner city neighborhoods makes people nervous. But I can't get too upset about this because, as far as I am concerned, this is what we want. We don't want a world in which no white person would ever buy a home in a majority black neighborhood, where people are just plain scared to live next door to someone of a different race. As that fear fades, things will change, and change will always hurt someone. But does anybody want to bring back segregation?
Posted by John at 1:37 PM

People don't seem to realize that the primary reason there are so many "black neighborhoods" and "latino neighborhoods" is because the banks and real estate companies spent decades conspiring to keep those people from moving into other, whiter, wealthier neighborhoods.

And now, all these decades later, the people from these communities suddenly don't want their neighborhoods to stop being defined by racial segregation? Bwuh?