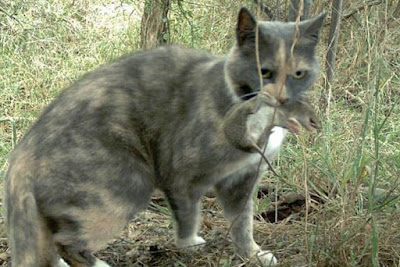 The government of Australia is serious about preserving what is left of its native fauna. The threat is certainly dire:


Since the First Fleet’s arrival [in 1788], 34 mammal species have gone extinct in Australia. All of them existed nowhere else on earth; they’re gone. More than 100 mammal species in Australia are listed as between “near threatened” and “critical” by the International Union for Conservation of Nature. The continent has the highest mammal extinction rate in the world. . . . “Recent extinction rates in Australia are unparalleled,” John Woinarski, one of Australia’s foremost conservation researchers, told me. “It’s calamitous.”

By contrast only one species of native mammal has gone extinct in North America since European settlement. For a long time the main threat to these animals was people, who shot and trapped many species to extinction. But these days the threat is invasive animals: rabbits that outcompete native herbivores, cane toads that poison carnivores, and small predators. European foxes and cats, it seems, are a threat that native marsupials simply can't cope with. Cats in particular are thought to have played a leading role in the extinction of 22 species.

Extreme situations have generated extreme responses, like the introduction of myxomatosis, a disease that killed somewhere around 5 billion rabbits in the 1950s. And now, a massive campaign aimed at killing 2 million feral cats. Nobody knows how many feral cats there are in Australia, but they live across the entire continent and the government thinks there are 6 million.

While the campaign against cats is only one part of a program that also includes the mass slaughter of other introduced species, it is of course the part that has attracted the most global attention. Hundreds of thousands of people have signed online petitions against cat culling. Most of that opposition comes from people outside Australia, though, and the government is ignoring it. Australians have seen sensitized over the decades to the threat posed by non-native species and to the reality that their native animal life might disappear, and most people seemed resigned to the slaughter.

One of the vast global forces transforming our planet is the mixing of animals and plants from ecosystems that evolved separately for millions of years. When that mixing happens, some species lose out. If we want to preserve some of that ecosystem diversity, we are going to have to take drastic action.
Posted by John at 7:39 AM