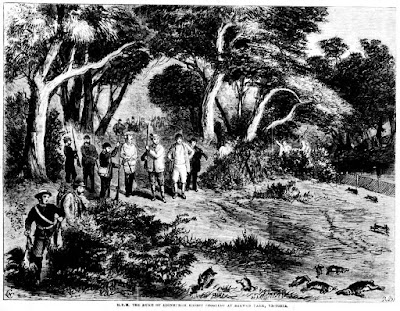 Back in 1859, an English settler introduced European rabbits into his Australian ranch, because he missed hunting them. Oh, the horror. The rabbits did what rabbits do without much in the way of predators or effective competition, and within a century there were so many rabbits in Australia that counting them proved pretty much impossible; the reigning estimate, though, is about 10 billion.

This had catastrophic effects on small native mammals, and serious impacts even on large animals like kangaroos. So the government launched a massive program to poison, trap, fence, and generally slaughter rabbits. In the 1950s they tried spreading a deadly rabbit disease called myxomatosis. These efforts halted the rabbits' exponential increase but reduced their numbers only a little, and many marsupials and tasty plants teetered on the brink of extinction. Things were so bad that in 1995 government scientists began experimenting with the rabbit haemorrhagic disease virus (RHDV) at a research station on Wardang Island, which they thought was isolated enough to keep the pathogen from spreading accidentally. But it did spread, apparently because it was picked up by flies that were then blown to the mainland. A great epidemic ensued, killing about 60 percent of all the rabbits in Australia – billions of rabbits, whatever the actual count of their population, a far greater toll than any human epidemic, ever.

Since then the rabbit population seems to have stabilized at the new, lower level. Scientists were of course interested in what would happen to all of the animal and plant species threatened by the rabbits' population explosion. There have been hints all along that the results were good, and now there is a major review study that confirms this:


Recently, however, scientists have noticed hints of a startling comeback. Driving through the desert at night, for instance, biologists now “see dusky hopping mice in your headlights everywhere,” says Reece Pedler, an ecologist at the South Australian Department of Environment, Water and Natural Resources. “It’s become pretty clear that something major has changed.”

To get a clearer picture, Pedler and colleagues pulled together 45 years of mammal trapping surveys conducted by the state government, mining companies, and nongovernmental groups. When they compared records from before and after RHDV’s arrival, they found that small mammal populations had skyrocketed in the years following the introduction of the rabbit virus. The crest-tailed mulgara increased its “extent of occurrence”—the area in which a species has been sighted—nearly 70-fold. The dusky hopping mouse and the plains mouse more than tripled and doubled their occurrence, respectively. . . .

The findings fit with what other biologists are seeing. According to Brian Cooke, an ecologist at the University of Canberra who was not involved with the new study, “there have been remarkable changes in arid zone vegetation since RHDV was released 20 years ago.” . . . .

Why would a bunny bust lead to a native mammal boom? Pedler offers two explanations. First, the end of rabbit overgrazing allowed native vegetation to grow back, providing food and shelter for mice and mulgaras. But that’s not all. When Pedler and his team poured over the trapping records, they observed precipitous declines in rabbit predators such as feral cats and foxes. The virus had likely rippled through the food web, starving these invasive predators, which had been devouring native species along with rabbits—a chain reaction called a trophic cascade.

It takes a certain hardness of heart to cheer the deaths of 4 or 5 billion rabbits, along with many thousands of foxes and cats. But that is what it will take, it seems, to preserve Australia's unique wildlife.
Posted by John at 8:53 AM

Cheering the deaths of so many rabbits might seem hard hearted, but is the alternative any less so? All those decades of rabbit abundance must have killed countless more native animals. To decry the deaths of those rabbits would be to cheer the deaths of the native species they displaced.

It's the same with everything - one cannot escape the opposite side of an issue. To preserve rabbits, one must condemn their victims, and vice versa.