A Leonardo for Sale 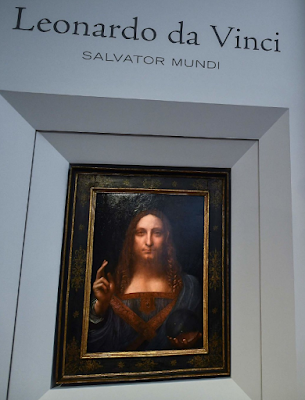 The last widely accepted Leonardo in private hands, Salvator Mundi, will be auctioned by Christie's next month. 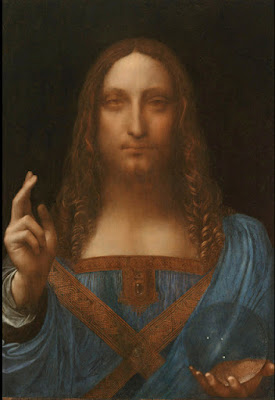 Note that although the attribution to Leonardo da Vinci is widely accepted it is not universally accepted. It is known that Leonardo painted such a work, because there are several painted copies and at least one engraving. But the painting had last been in a well-documented collection in 1763, when it was sold by the King of Spain.

Plus, when this was rediscovered in 2011, it was in pretty bad shape:


The panel on which it is painted had split -- badly -- and someone, at some point, attempted to spackle it back together with stucco. The panel had also been subjected -- unsuccessfully -- to a forced flattening, and then glued to another backing. The worst offenses were crude areas of overpainting, in an attempt to hide the botched panel repair. And then there was plain old dirt and grime, centuries of the stuff. It would have taken a huge, nearly delusional leap of imagination to see a Leonardo lurking underneath the mess, yet that is exactly how the painting's story concluded.

As to why people think this is a Leonardo, well, it's that old connoisseur's trick, "feel." The experts think that 1) this seems to be the original lying behind all the copies, which all vary from it in different ways, and 2) it is a lot better than any of the copies. The hand has gotten a lot of attention; Leonardo was very persnickety about the anatomy of hands, and all of the copies mess up this painting's perfection of both anatomy and perspective.

Another clue is the glass orb:


Leonardo had many imitators in 16th century Milan but their efforts are miserably below his standard. Looking at the newly cleaned Salvator Mundi, which will be exhibited at the National Gallery this autumn as a rediscovered work by Leonardo, the transparent orb is far too brilliantly painted to be the work of one of his disciples.

Leonardo was obsessed with problems like how to create translucent effects in painting, how to capture the mysteries of light – the very problems posed by painting a glass sphere. 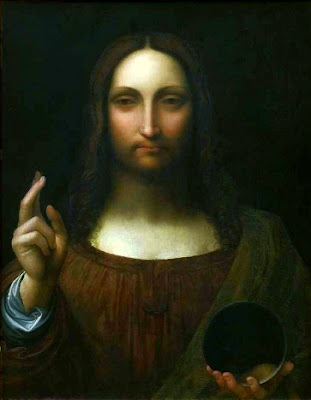 Above is a contemporary copy of the Leonardo, done around 1516 by Cesare de Sesto. The hand looks pretty good to me but I can see what they mean about the orb. 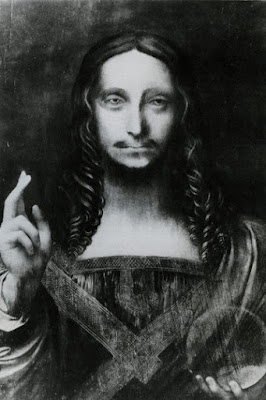 Another question about Salvator Mundi concerns the recent restoration. When the painting was rediscovered it looked like this. How we got from this to the rather perfect-looking image presented by Christie's must be a very tangled and technical tale, especially since you now cannot see any evidence of the split on the board that occasioned the overpainting in the first place. But I have tried to find complaints about the restoration and found none; all the usual suspects praise the work done on this painting as meeting the most exacting standards.

So there you have it. The consensus  of informed opinion is that this is a genuine Leonardo, but on the other hand the experts have been wrong before.
Posted by John at 9:36 AM