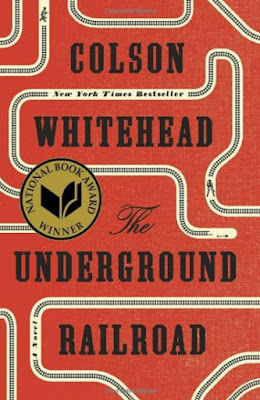 I just finished listening to The Underground Railroad, which won last year's National Book Award for fiction. It's a strange, sad book, and I can't say that I really recommend it. But it is certainly different from any other book you have read.

The central conceit is that the underground railroad is an actual network of train tunnels running under America, connecting the South to the free states. The central character, Cora, is a slave on a Georgia plantation who escapes with the railroad's help. But it doesn't carry her to freedom; instead, it transports her through time as well as space, to endure the different sorts of oppression and crushed hopes African Americans experienced over the course of the nineteenth and early twentieth centuries. This allows Whitehead to explore the legacy of slavery in a broad sense, showing how Cora suffers from it no matter where she goes and how things look on the surface.

I looked up a couple of reviews before I wrote this and they said pretty much the same thing: that Whitehead exposes the reader to slavery's evil in new and striking ways. I didn't feel it. But then I am probably not the reader Whitehead was aiming at. I have read a stack of nonfiction books on slavery and done my own research on slave life, and nothing in any fiction has ever affected me the way the plain records of the past do.

So I wasn't all that impressed by the horrors Whitehead presents, and I found the fictional parts of the book only so-so. Cora is a rather flat character, which is intentional, but not much fun. The plot is predictable, because you know things are never going to work out for the black characters. One of the other running characters is a slave catcher named Ridgeway; I suppose he was supposed to be the villain, but he struck me as no more interesting than Cora, either in his wickedness or his small courtesies. I enjoyed the minor characters much more, including Cora's grandmother, her lazy, dissipated owner, and some of the station masters and conductors Cora meets on the underground railroad. I thought much the best part was the last section, in which Cora has arrived at a free black community created by abolitionists and runaways, where they explore the limits of their freedom and debate what to do about rising tensions with their white neighbors.

But if you want to read a novel about slave life, I much preferred Marlon James' The Book of Night Women.
Posted by John at 7:45 PM