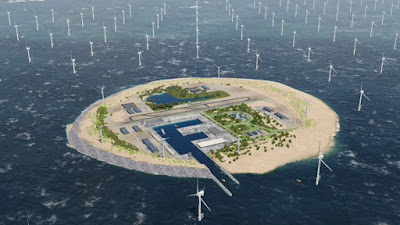 A consortium of German, Dutch and Danish power companies has hatched a bold scheme to profitably extract even more wind power from the North Sea: build artificial islands in the shallow area known as the Dogger Bank. Building islands is expensive even in seas only a few meters deep, but building wind turbines and other infrastructure on land is so much cheaper than building it in water that the idea might still pay off. Ars Technica:


North Sea Wind Power Hub is a proposed energy island complex to be built in the middle of the North Sea as part of a European system for sustainable electricity. One or more “Power Link” artificial islands will be created at the northeast end of the Dogger Bank, a relatively shallow area in the North Sea, just outside the continental shelf of the United Kingdom and near the point where the borders between the territorial waters of Netherlands, Germany, and Denmark come together. Dutch, German, and Danish electrical grid operators are cooperating in this project to help develop a cluster of offshore wind parks with a capacity of several gigawatts, with interconnections to the North Sea countries. Undersea cables will make international trade in electricity possible.

According to this plan, the first artificial island will have an area of 6 square kilometers. Thousands of wind turbines will be placed around the island, with short alternating-current links to the island. On the island itself, power converters will change the alternating current to direct current that will be carried to the mainland via undersea cables. The project is to be completed around 2050.

The scale of this plan is impressive. The first island and surrounding turbines should generate around 30 Gigawatts of power; with a chain of islands that could eventually rise to 100 GW, enough for 100 million people. By comparison the largest wind power farm in the world today generates 0.63 GW. All of this infrastructure would be out of sight of land.
Posted by John at 8:20 AM

I'm curious how such an installation will fare against North Sea storms, which have historically been pretty severe, and which are only going to get worse as climate change progresses.

I also wonder about security concerns, such as the possibility of terrorist sabotage. Piping the electricity of 100 million people through a single or a few undersea cables seems like it could be problematic. Then again, we've used undersea cables for a long time already, for both electricity and telecommunications, and they've not been targetted yet, so perhaps it's more difficult or less effective than I might surmise?

The power will be distributed among five countries, so there will be multiple cables. And yes destroying our power infrastructure is quite difficult; how would terrorists even find a sea-floor cable? The most vulnerable point would be where the sea-floor DC cable emerges and connects to a substation where it is converted into whatever type and voltage are appropriate for the local grid. But if you imagine a big electrical substation you can see that finding the crucial point requires a lot of knowledge.

I think the long-term danger to our power grid is through computer hacking. No single piece of physical infrastructure is crucial; it's a grid, not a line. But as we go more and more to "smart" grids controlled by software -- which I gather is essential for a grid that depends heavily on sun and wind power that fluctuate so much -- we create a serious vulnerability.