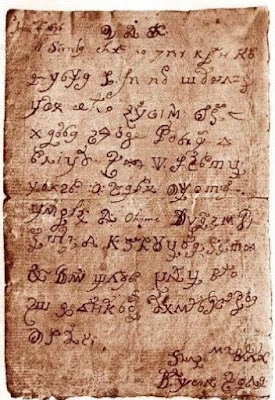 The news from Italy:


For more than three centuries, scholars, codebreakers and occultists have been stumped by a cryptic letter written by a Benedictine nun who claimed it was dictated by the Devil himself.

According to legend, Sister Maria Crocifissa della Concezione of the Palma di Montechiaro convent in southern Italy woke after a fainting spell on August 11, 1676 to find her face covered in ink. In one hand were several letters she had penned consisting of an indecipherable mix of symbols and languages.

Sister Maria and her sisters at the convent believed they had been delivered by a demon, but were unable to make any sense of the text.

But now Italian researchers claim to have deciphered 15 lines of the sole surviving letter using decryption software they found on the "dark web."


“Everything’s on there: drugs, prostitution, pedophilia and also programs used by intelligence services to decipher secret messages, like the one we used,” Ludum director Daniele Abate told Italian radio 105 Network.

The researchers did not let their dark software go in blind. They thought the text looked like a mix of characters from other languages that Sister Maria might have seen, so they programmed in Greek, Arabic, Latin, and the Runic alphabet. It seems that they were right, since their program was able to read much of the letter. Since the code was based on languages that Sister Maria was familiar with, they conclude that she wrote the letter herself.


The letter describes the relationship between humans, God and Satan in a rambling and inconsistent manner. In it, Sister Maria — or whoever had possessed her — encouraged God to abandon man and leave him in the clutches of the devil.

“God thinks he can free mortals, this system works for no one,” one of the translated lines reads. The text also describes God, Jesus and the Holy Spirit as “dead weights.”

Abate said the contents of the letters made her suspect Sister Maria may have been suffering from schizophrenia.

“I personally believe that the nun had a good command of languages, which allowed her to invent the code, and may have suffered from a condition like schizophrenia, which made her imagine dialogues with the Devil,” she told The Times of Israel. “That has not stopped numerous interested Satanic sects contacting me since I published our findings.”

How long will it be before there is a book claiming that the letter is a true prophecy of the End Times? Maybe I should write it myself.
Posted by John at 5:45 PM

What I want to know is, what happened to the other letters? And was she considered possessed? Was an exorcism tried?