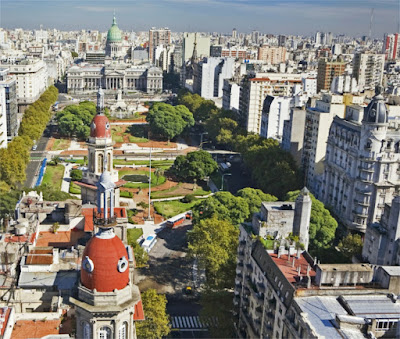 Buenos Aires is Argentina's city of  "faded European grandeur and Latin passion." Both faded grandeur and passion seem appealing to me right now, trapped in my extremely un-grand, un-passionate suburban house by two days of hurricane-remnant rains, so let's send our thoughts there and see what we find. 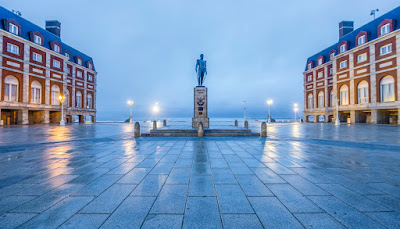 The city of Buenos Aires was founded by a 1536 Spanish expedition as Ciudad de Nuestra Señora Santa María del Buen Ayre – "City of Our Lady Saint Mary of the Fair Winds". This was in gratitude to Our Lady of Bonaria, a local Virgin from Sardinia much beloved of Mediterranean sailors, who had saved the expedition from a fearsome storm. But she was not much use on land, and that colony was driven out by hostile Indians. The site was such a good one, though, that another colony was refounded on the same spot in 1580, and that one lasted. 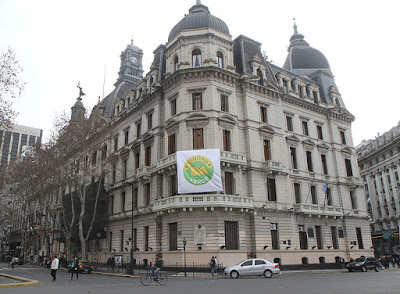 In Spanish colonial times the town was run directly by the crown as an essential port for shipping South American silver to Cadiz, and the local residents had even fewer rights than most Spanish subjects. This led to a culture of resentment against authority that still thrives in the city. By the 1790s Buenos Aires was a hotbed of revolutionary sentiment and radical agitation, with committees issuing manifestos day and night. 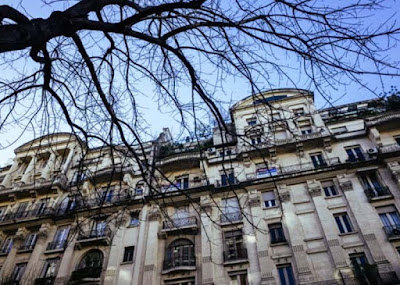 Argentina achieved independence in 1816 but that only inaugurated 170 years of conflict between the city and the rest of the nation. Buenos Aires was modern, European, and radical, its population often dominated by immigrants, and it seethed as part of a mostly rural, Catholic, conservative country. In 1853 the city and its province actually seceded from the rest of the nation and formed an independent state, which was not conquered by the rest of Argentina until 1860. 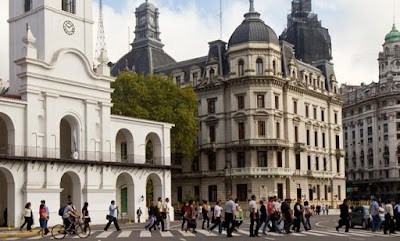 Because of all this political trouble, Buenos Aires was stripped of all local political authority in 1880, and from then until 1996 the city was ruled directly by the national government, its mayor appointed by the president.

The city's loss of political independence corresponded with the beginning of its great era of growth. Buenos Aires rode the wave of 19th-century globalization to status as a great world city. Investment poured in from Britain and France, paying for the construction of an enormous railroad network with Buenos Aires as its hub, drawing all the produce of the nation to its wharves, and all the business action to its stock and commodity exchanges. A flood of immigrants, especially from Italy, transformed the culture. 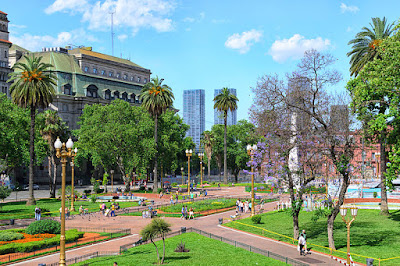 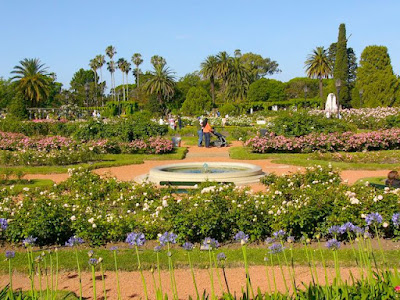 Some of the money earned in this great era from 1870 to 1930 was spent creating the marvelous central city you still see today, with its squares and parks and boulevards of lovely buildings. 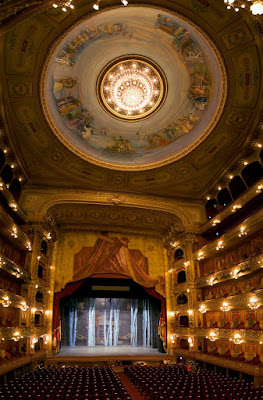 The famous opera house, the Teatro Colon, opened in 1908. 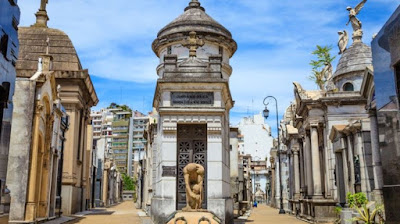 The most visited landmark of that era is the Cementerio de la Recoleta. 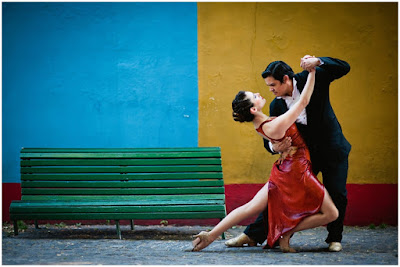 The city's most famous art form, Tango, took off in the 1920s. The city also saw a great wave of artistic and literary creativity; Jorge Luis Borges, born 1899, was the greatest of a whole generation of writers who came of age in this time, and they were accompanied by painters, architects, and pioneers of cinema. 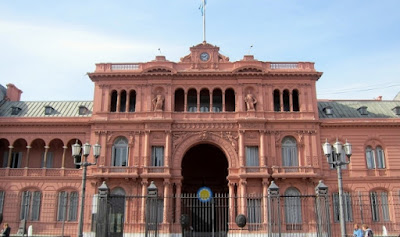 But the Depression hit Argentina as hard as anywhere else in the world, and the prosperity came to a crashing end. This was followed by, and maybe led to, fifty years of political instability under dictator Juan Peron and his successors. In the 1950s and 1960s, as growth resumed in the rest of the world, Argentina stagnated. In the 1970s Buenos Aires was the epicenter of the "Dirty War" in which 30,000 foes of the dictatorship "disappeared;" Los desaparecidos became the martyrs of the city's opposition to tyranny and a dominant theme in its culture. (Photo shows the presidential palace, with the balcony from which Juan and Eva Peron made their famous appearances to their followers.) 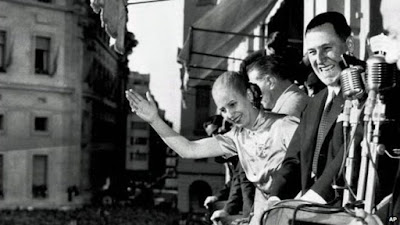 One of the flash points of conflict between the city's radicals and the government was the dictatorship's plan to construct a network of freeways through and around the city, bulldozing through old neighborhoods. So great was the opposition to this plan that only three freeways were ever built, and they remain widely hated by the city's radicals as symbols of both tyranny and modernizing indifference to the happy life of urban anarchy. Of course this conflict has played out all over the world, raging hot in Baltimore at the same time; sometimes the things that people attribute to local causes are really just reflections of worldwide patterns created by underlying economic and technological change. (Juan and Eva Peron on that balcony) 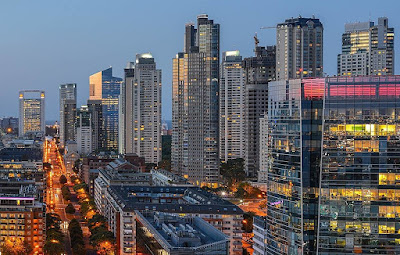 Speaking of which, Argentina rejoined the world economy in the new globalization wave of the 1980s and 1990s. Renewed growth sent the population of the metropolitan area above 15 million, and the city's skyline was transformed by an amazing array of skyscrapers. 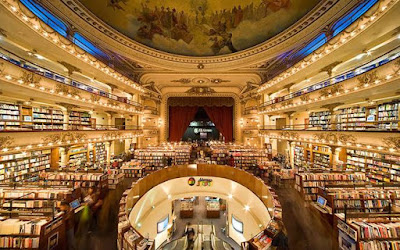 The city's culture has also been re-invigorated; you may have seen pictures of El Ateneo Grand Splendid, a marvelous bookstore opened in an old theater in 2000; acccording to some sources Buenos Aires leads the world in bookstores per capita. 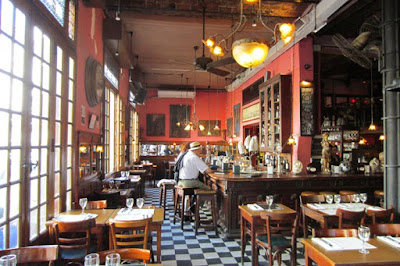 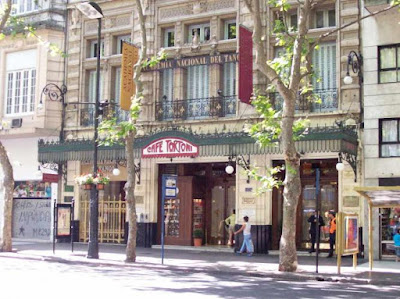 The city is famous for its cafes; google Buenos Aires and half the pages that come up are lists of the ten or twelve best in the city. 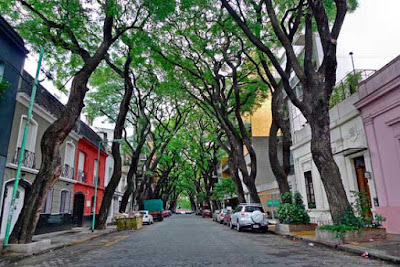 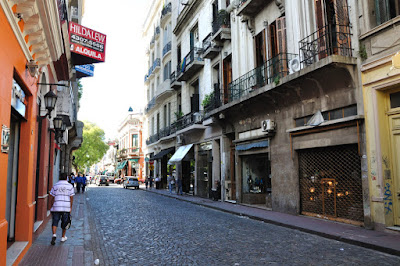 The city's people have a reputation much like that of Parisians or New Yorkers: they are clever, inventive, and passionate, but also cynical and mean; they stay up late, drink too much coffee and wine; they are lax in their morals but firm in their friendships; they are always arguing, often about politics or art; their status as real Argentinians is open to debate. They also love their own city as much as any people in the world. 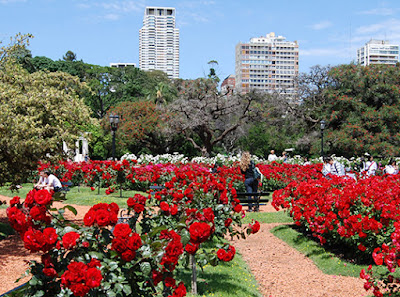 So today I imagine myself in their home, seeing what they see.