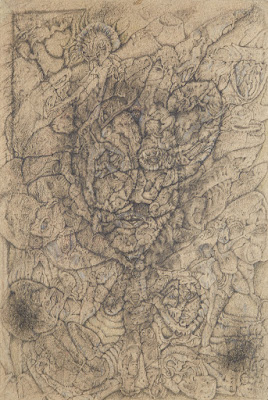 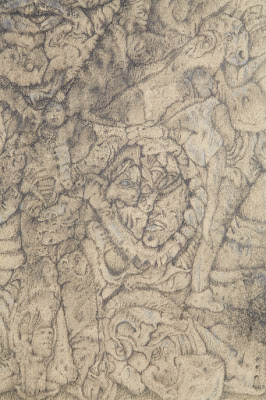 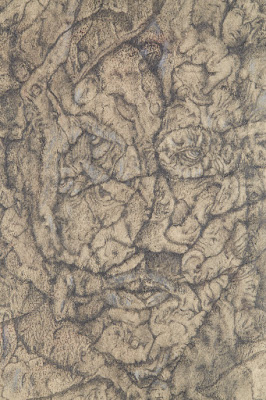 These three images of the same charcoal drawing (the lower two are details) appeared on the Tumblr of the Cavin-Morris Gallery. I was so struck by them that I immediately searched for Michael Reddick, artist. This, from the Times in 1998, was pretty much the only thing I found:

The art program of the Connecticut Prison Association is proud to have helped Raymond Materson and other talented prisoners get their starts as respected artists [ "From Scraps of Prison Cloth a Miniature World Grows," Dec. 11 ] . Other Connecticut prison artists, among them Michael Iovieno, Dominic Vincenzo and Michael Reddick, are also receiving national recognition.

The program provides art instruction, materials and exhibition opportunities to inmates throughout the state. Last year we worked with more than 300 prison artists, exhibited the work of 97 inmates in our annual show and published a journal.

The Cavin-Morris Gallery specializes in "Outsider Art," so I bet this is the same guy; art by a mysterious prisoner would be just their kind of thing. But what to you suppose has happened to Michael Reddick since then? Was he shanked in a dark hallway? Did confinement, in the end, sap his creative energy? Or could it be that he was released and found that he couldn't work on the outside?
Posted by John at 8:14 PM