No More Worrying about Immoral Politicians

I should be over being surprised or impressed by any more data showing how little most people care about the things they say they care about, but here's a doozy: 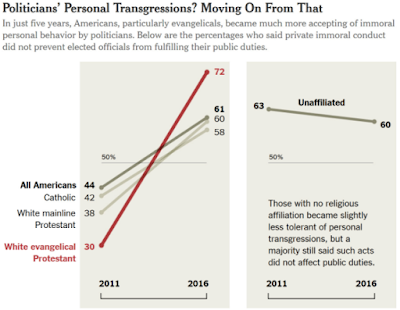 In the wake of Trump, the number of white evangelical Protestants saying they don't care about a politician's private morality has gone from 30 percent to 72 percent, which you have to admit is an impressive accomplishment for an orange-haired television personality.

Personally I've never cared much about this sort of thing, but in the 1990s I listened to conservative Christians going on about this forever. Maybe the good news is that I won't have to listen to it as much for a while.
Posted by John at 12:16 PM

My takeaway from this is that religious people are better at rationalizing away uncomfortable truths, particularly if doing so helps them get their way.

I'm not entirely sure how bad or good of a thing this is, or how to go about judging.

On the one hand, it's awful that there are so many people who are so very hypocritical and so willing to throw out principle when it is convenient.

But on the other hand, this does somewhat lead to people changing their minds about things when faced with a reason that hits close to home: an unmarried daughter ending up pregnant out of wedlock, a homosexual son coming out of the closet, et cetera. Failing to stick to your principels can end up being a good thing when your principles themselves are abominable.