But Are They Real? 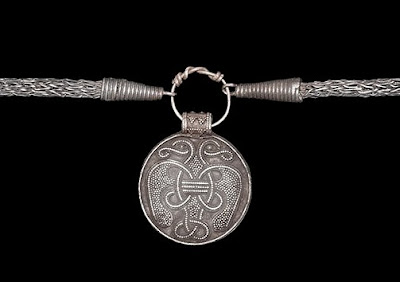 Let's play "real or fake?" with these two items from the online auction houses. The above is up for sale as a "Viking double-headed raven pendant necklace, 11th-12th century." But 1) it's amazingly well preserved – look at that plaited chain! Is that silver that has been in the ground for a thousand years? 2) the only provenance is "old European collection" and 3) I've never seen anything like it. The raven heads in particular don't look like any Viking examples I know of. I'm thinking fake. 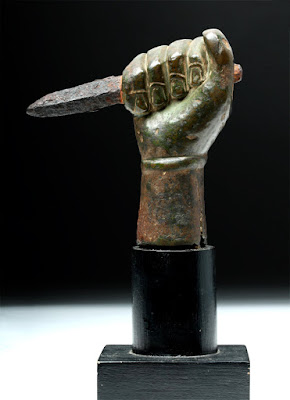 This is supposed to be a bronze Roman statue hand with an iron dagger. I really know nothing about this sort of thing, but I'm suspicious because 1) I've never seen another one quite like this 2) copper and iron react very badly together so there ought to be a mass of corrosion where the bronze and iron meet, or damage from its removal and 3) this is just so much exactly the kind of thing 21st-century people want. I won't offer a firm opinion, not being any kind of expert on classical statuary, but my alarm bells are ringing.
Posted by John at 9:37 PM