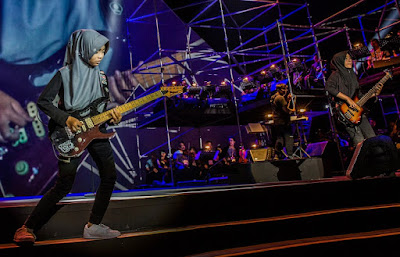 Heavy metal is huge in Indonesia, where the president likes to be photographed in his Megadeath t-shirt. So it has been big news there that three teenage girls – 17, 17, and 15 – have formed a hit band:


The three teenage girls — shy and even seeming slightly embarrassed as they peer out from their Islamic head scarves — do not look much like a heavy metal band.

But a dramatic change occurs when they take the stage. All pretense of shyness or awkwardness evaporates as the group — two 17-year-olds and one 15-year-old — begin hammering away at bass, guitar and drums to create a joyous, youthful racket. . . .

But beyond blowing away local audiences with their banging music, the three girls are also challenging entrenched stereotypes about gender and religious norms in the world’s most-populous Muslim-majority nation.

In finding their voices and becoming a band, they say they have endured criticism from their families, friends and neighbors, and have received hundreds of online death threats for supposedly blaspheming Islam and not acting like proper Muslim girls — in other words, submissive, they said.

One night, while riding motorcycles home from a recording studio, they were pelted with rocks wrapped in paper inscribed with profane messages.

But they have fought back, through songs about intolerance, gender equality and the rights of young people in a country where issues like forced underage marriage are still prevalent, especially in rural areas like West Java.

Because I read a fair amount of conservative writing on social change, and have spent a lot of time myself pondering why freedom and wealth have not made us happier, I often wonder what it would take to stop the transformation of our societies. And the answer is, beat up girls like these and chase them back into their parents' houses. That's what the Taliban would do.

And that, I say, is why change will not be stopped, and why most of the American and European conservatives who rage against it in their essays are really on its side. Because we lack the faith, the determination, and the nastiness to enforce social rules against charming young people determined to break them. For every conservative who really believes in an idealized Victorian past and hates everything that has happened since there are ten who turn out to be closet Rolling Stones fans or openly gay or just plain soft-hearted. You often see conservatives complain about the acceptance of single motherhood, and say that it ought to be more stigmatized; but if their own niece got pregnant in high school, do you think they would shun her? Not a chance.

One of the best things about our society is that we are more open, tolerant, and accepting of difference than any other people I know of; and we, including most of our conservatives, are proud of this. The rise of Trump has shown that there is a strain of repressed intolerant nastiness in a wide swath of America, people who miss the good old days when retards and pansies could be mocked with impunity. But turn a camera on them and most would disavow any such sentiments. This, like much of what passes for conservatism right now, is an angry spasm rather than a determined reactionary program. Trump after all is a promoter of professional wrestling, casino gambling, divorce, philandering, and a contemptuous attitude toward any sacred cows other than the flag and the military, so he is hardly the one to lead us back to the 1950s. His popularity is a sign of the collapse of social conservatism, not its strength.

Change will continue, because in our world even the meanest are too soft and forgiving to stop it.
Posted by John at 7:39 AM

On the one hand, yes, there is much merit in Steven Pinker's fundamental insight, that over time we have grown less violent.

On the other hand, isn't the spasmodic nature of violent, extra-familial social control a very old thing--perhaps even a perennial fact? Witch hunts, pogroms, extra-familial violence of all sorts was, in premodern times, as far as I can tell, usually spasmodic (or at least episodic) and often followed by phases of regret and recrimination--even persecution of the instigators of said violence. A systematic, routine, extra-familial violence of social control may be rather rare, it seems to me. There are exceptions, of course--notably in the colonial Caribbean and in the US South after (I think) about 1830 or so--when ordinary, non-slave-holding citizens began to be recruited into slave patrols. In contrast, my impression is that medieval control of serfs, for example, was largely familial, in the medieval sense of that word.

On the third hand, perhaps one should avoid saying reactionaries are too "soft" to really use violence against what they hate. I suspect more than a little violence has come from a desire to prove that very accusation wrong. Perhaps one should say that, however much they hate, they can still hear the better angels of their nature.

Now over at the temple
Oh! They really pack 'em in
The in crowd say it's cool
To dig this chanting thing
But as the wind changed direction
And the temple band took five
The crowd caught a whiff
Of that crazy Casbah jive

Wow, until now I never understood the lyrics to that song, or how creepy and terrifying they are. I couldn't make them out, but now . . . "All your old civilizations are powerless against us. Soon our music will be everywhere. And we will all. Be. Exactly. Alike." The lack of intent to frighten--the intent that this is just about liberation and fun--almost makes it more frightening, as though the music were operating on its own through us, to spread and reproduce itself, independent of artist or listener, like a virus. It makes me want to do a Benedict Option, and I'm not even a believer!

The key distinction, of course, is that the people in these places WANT to be exposed to the foreign music in question, and it is their repressive governments that stand in the way of them doing so.

It's not about forcing cultural assimilation. It's the exact opposite - allowing different cultures to exchange ideas freely, and letting people choose for themselves the music, the art, the literature, and even the languages they want to take part in.

The Christian and Islamic worlds have been borrowing and exchanging pieces of their cultures between each other for as long as they've both existed. Huge swathes of the English language are taken from Arabic, because Arabic spent many centuries as the most important language in Europe. It was the primary language of scholars, of poetry, and of major trade in the Western world for roughly a millenia.

We owe an incredible amount to the Arabic world. Their culture influenced so many aspects of our own: our vernacular languages; our musical traditions; our medieval re-introduction to Classical Greek and Latin knowledge and literature (since it were lost in the wake of Rome's collapse and only preserved in Arabic texts); our cuisine; our economic systems; et cetera, et cetera.

How different the world would have been if Europeans had rejected Arabic culture outright! If Christian king's had suppressed it forcibly, sending in their armies to bloodily prevent the people from mimicking Arabic art, music, poetry, science, and more. There is a popular imagining that the Christian world has always shunned the Muslim sphere, but this is flatly false. Rather, we've had a longstanding love affair with Arabic culture, routinely becoming obsessed with various aspects of it and desiring to incorporate them into our own culture.

So how, then, is it terrifying when the situation is reversed? Western culture wasn't beating down the doors of the USSR or post-revolution Iran. It was the Soviets and the Iranians themselves who were hammering against the doors of their own repressive political regimes, seeking to throw them open and let the West in, to be welcomed with eager open arms.