Meanwhile, in the Virgin Islands 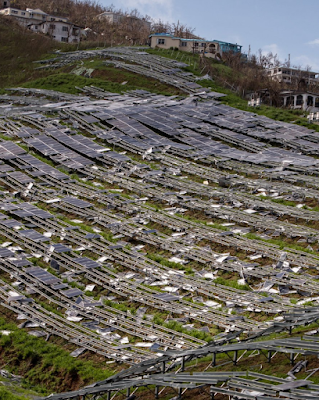 The Virgin Islands have been devastated by two Category 5 hurricanes in two weeks: both hospitals have been so badly damaged they will have to be torn down and rebuilt, ditto for most of the schools; there is no electricity and not even a guess as to when it will be restored; and most of the islands' supplies usually reach them from Puerto Rico, where the ports are wrecked and they don't have enough food for themselves. And then this:


On St. Croix, one of the few working cell towers went down after someone stole the generator powering it.

Pondering that trashed solar farm above, it occurred to me that I had never considered this particular problem: solar might seem like the perfect power source for a Caribbean island, until the hurricanes show up.
Posted by John at 8:26 AM

Having lived in hurricane plagued areas, that's always been a nagging concern of mine about solar panels.

Really, the only solutions I can think of are to either remove the panels or encase them in a protective shutter of some kind. The technology exists for both of these things, it just needs to be designed and adopted, for both small and large scale installations.

One thing we might see in the future is houses being designed from the get-go to incorporate solar cells. Things like modular rails or mountings designed into the building structure itself, or even just more easily accessible rooftops, could make it much more realistic to be able to remove or shutter in your solar panels before a storm, in the same way that people already put plywood or metal shutters over their windows and bring patio furniture and similar inside.

i suspect that tidal generators as well as offshore turbines would lie in similar disarray after particularly strong hurricanes.

what strikes me most about the destruction is that in a way, a city is the inheritance of all previous efforts, even of long-dead inhabitants, even if the previous edifice no longer stands. every expenditure in its past moved the city toward its present state, and thus the cost of rebuilding all at once is compounded when the infrastructure itself lies in ruins.