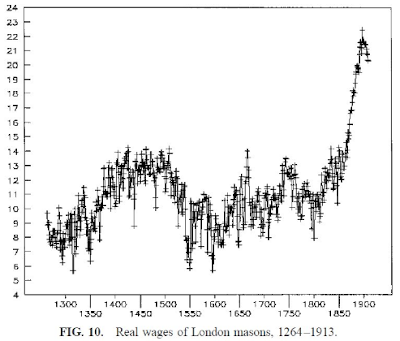 Three generations of economic historians have been mining Europe's records for data on wages and prices, and they have now built up some fairly impressive data sets. Here is one for masons working in London. The wage data comes from municipal and royal records of public building projects and is very reliable. The price data comes from a grab bag of sources, using the same sort of "basket of goods" approach we use for calculating inflation today. This data has the advantage that the basic goods (food, fuel, rent) were mostly the same over this period, since there were few innovations in consumer goods. But before 1600 the sources are spotty for everything but grain, and grain prices fluctuated due to the weather, so the numbers are far from certain. Still, they are pretty good.

The graph shows that before 1850 the well being of workers and their families was very much divorced from the overall state of the economy. Wages were high in the 1400s because repeated visitations of the plague kept the population low, and hence the national economy stagnant. The 1500s were a period a great population and economic growth for England as a whole, but as the graph shows this meant a significant decline in the real wages of ordinary workers. Wages weren't cut in nominal terms, they simply failed to keep pace with inflation. Inflation in this period was was fed by 1) a huge increase in the amount of silver in circulation, caused by Spanish looting in the Americas and new mines in Germany, and 2) a growing population competing for limited resources, which led to a big increase rents in London and other cities and a smaller increase in the price of food.

But notice that by 1860 the economy had entered a different world, leading to the first real transformation in the lives of ordinary workers since Roman times.

"But notice that by 1860 the economy had entered a different world, leading to the first real transformation in the lives of ordinary workers since Roman times."

It's also worth noting that in addition to rising wages, this was also the age when major urban and societal reforms started coming about in droves. The Sanitary Movement effectively began in London itself at this time; major child labor laws and workplace safety regulations began to appear; education started to shift from being a privilege of the wealthy elite to a free public service; modern urban planning and city-wide renovation projects were in vogue; gas lighting was in a state of advanced maturity and electric lighting was beginning to make in-roads to replace it; running water and indoor plumbing began to become commonplace and affordable; accurate timepieces became cheap enough for the common man to afford for the first time ever, due to mass production and replaceable parts; et cetera, et cetera.

So many things came about in the second half of the 19th century that drastically improved the lot of the common man. And while economic prosperity clearly greatly facilitated many such developments, equally important was the spirit of Progress that was sweeping Britain and other industrializing powers.

The powerful and influential segments of society largely saw the wisdom in investing in the wellbeing of the poor masses, rather than keeping them downtrodden and exploited. Having better educated, healthier workers who had enough money to spend on the very goods many of the new industries were busily producing simply made good economic sense. And thus it incentivized them to spend on public infrastructure, services, and health - to promote the general good, and by direct extension serve their own self interests.

When you improve the quality of life for a nation's poorest citizens, you improve it for -all- of its citizens.