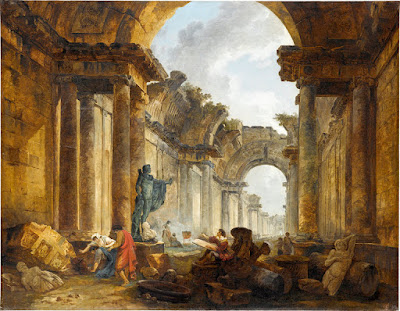 Hubert Robert (1733-1808) was one of the most prominent artists of  revolutionary France. His favorite subject was ruins, both real and imaginary; Diderot dubbed him “Robert of the Ruins.” (Grand Gallery of the Louvre as a Ruin, 1796) 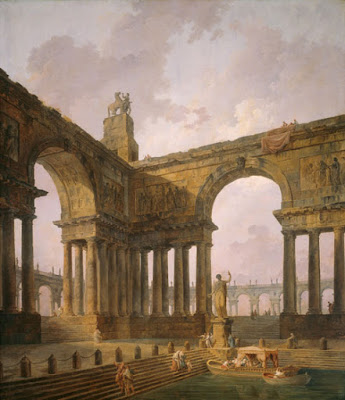 The National Gallery in Washington is mounting a major exhibit of his work this summer, which I am hoping to see. They say:


In addition to being a talented landscape painter, Robert was a gifted and prolific draftsman, an engaging printmaker, an interior decorator, and a garden designer. Lively, intelligent, and much sought after, this good-humored, well-loved bon vivant moved easily through the most exalted circles of Paris’s society, even though his own parents had been personal attendants in an aristocratic household. He later addressed the demise of this glittering world through representations of contemporary events such as the vandalizing of royalist monuments and the destruction of the Bastille prison during the French Revolution. 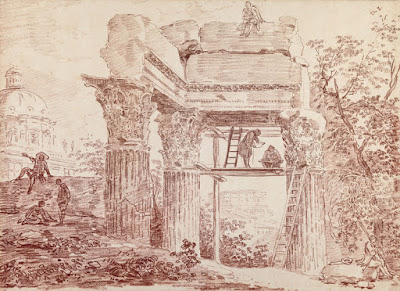 Robert's father was in service to the noble family of de Choiseul, marquises de Stainville. In 1754 Robert learned that the de Choiseul heir was heading to Rome as a French diplomat, and he attached himself to the household and traveled with them to Italy. He was in Rome for 11 years, compulsively sketching ruins and polishing his style. (Archaeologists at the Temple of Vespasian, 1762) 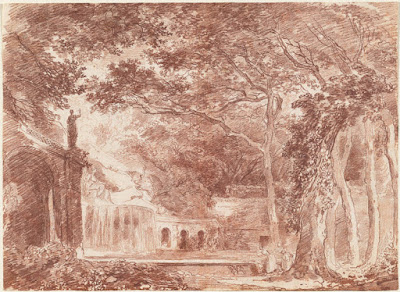 Oval Fountain in the Gardens of the Villa d’Este Tivoli c. 1763 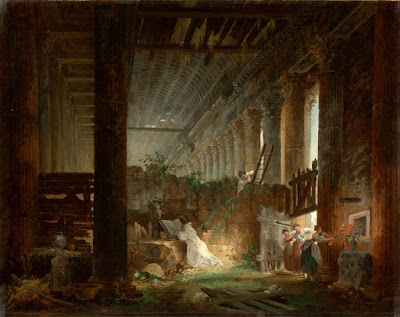 Hermit Praying in a Roman Temple, 1760 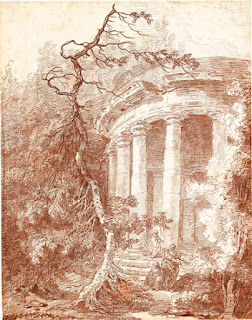 In 1765 Robert returned to France. With the de Choiseuls as his patrons he quickly entered the highest ranks of French art. He was accepted into the Royal Academy in 1766 and successively appointed "Designer of the King's Gardens", "Keeper of the King's Pictures" and "Keeper of the Museum and Councilor to the Academy". (Circular Temple in a Wooded Landscape, 1770) 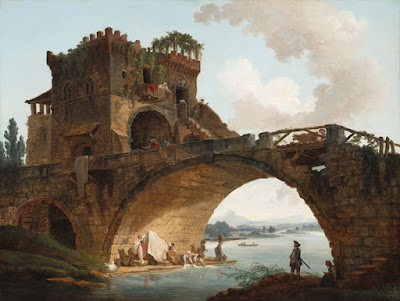 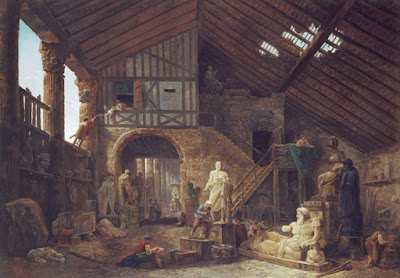 The Studio of an Antiquities Restorer in Rome, 1783 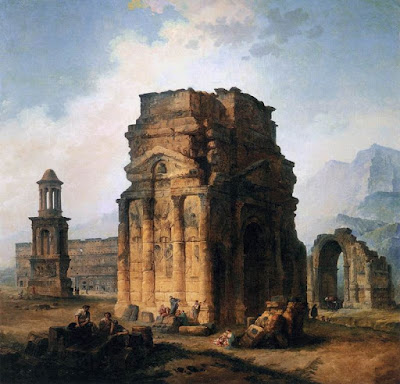 When the Revolution came, Robert had the sort of troubles one would expect in a loose-living hanger-on of aristocrats and admirer of foreign cultures. He was arrested under the Convention and he is said to have been slated for execution, only to be spared when the fall of Robespierre marked the end of the Terror.  (Triumphal Arch and Theater in Orange, 1787) 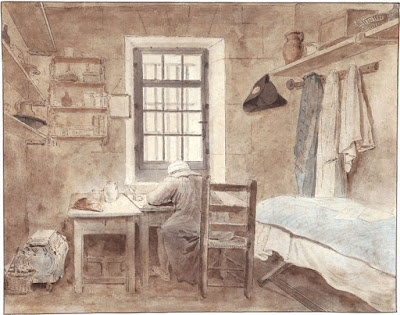 He then joined the reaction and was made part of the committee that turned the Louvre from a royal palace into the national museum. He died of a stroke on 15 April 1808. (An Inmate of St. Lazare Prison, 1794)
Posted by John at 7:28 AM