Hillary's enemies have always said that she doesn't really believe in anything but her own success. Certainly she is extremely ambitious, and she has shifted her positions on a lot of issues over the years. But one thing she has never wavered on is her feminism. She believes in the importance of power for women, and she has worked her whole life for feminist causes. Above, video from Hillary's campaign putting her race for president in the feminist context; below, her victory tweet from last night. 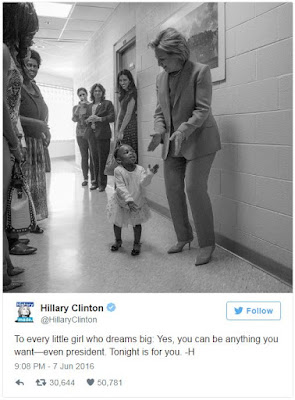 Now Hillary gets to run for president against America's leading sexist jerk, which must be awfully close to her favorite dreams.
Posted by John at 12:21 PM

A wise man wavers, a fool is fixed.

Verloren, for once, is right. Playing the woman card all the time will not be a winning strategy for Her. Trump called her out on it once, and look how that whole strategy collapsed.

...unsurprisingly, you completely misunderstood me. How embarassing for you.

So why isn't Clinton a fool for not changing her mind about women's rights? Because there's no new evidence. Changing your mind only makes sense when you have a reason to, and there simply isn't one here. Nothing has changed. The same arguments that were valid when women marched for the right to vote a century ago are still just as valid today.