The Body in the Well 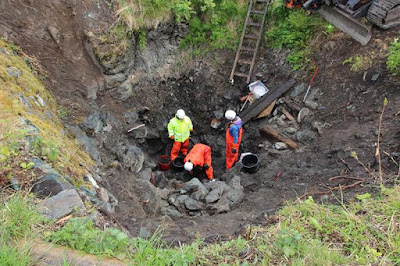 Norwegian archaeologists were digging in a medieval well at the castle of Sverresborg, near Trondheim, when they found something they were expecting. Well, perhaps not expecting, but certainly they had hopes. 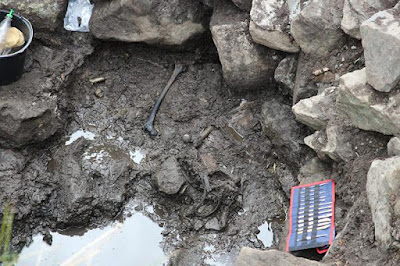 The castle appears in Sverre’s Saga, which chronicles the reign of one of Norway's medieval kings. According to the saga,


In 1197 King Sverre Sigurdsson and his Birkebeiner-mercenaries were attacked and defeated in his castle stronghold, Sverresborg, by his rivals, the Baglers. The Baglers burned down buildings and destroyed the castle’s fresh water supply by throwing one of King Sverre’s dead men into the well, and then filling it with stones.

And what turned up in the bottom of the well, under several feet of stones, was a skeleton dating to around 1200.

The reason this caught my eye was that I dug into several 17th-century wells in southeastern Virginia, and I spent some time imagining that I might find a skeleton at the bottom of one. Because narratives of the Indian attacks of 1622 and 1644 say that the Indians tossed dead Englishmen down wells. Sadly, I never dug the right well. But some lucky archaeologists in Norway did.
Posted by John at 9:31 PM