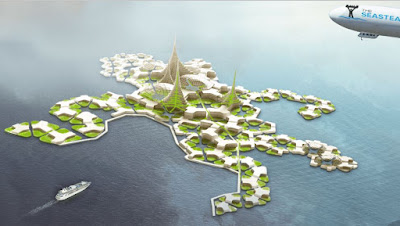 In 2008 billionaire libertarian Peter Thiel co-founded the Seasteading Institute, devoted to building floating islands where inventors and entrepreneurs could thrive free from all interference by governments. This year Thiel has become a delegate for Donald Trump and financed Hulk Hogan's $100-million libel suit against Gawker. Thiel's turn toward authoritarianism puts me in a mind to reflect on the absurdity of the Seasteading project and all the other boyish fantasies of tech world libertarianism.

The Seasteading Institute's web site lays out their project like this:


Seasteaders bring a startup sensibility to the problem of government monopolies that don’t innovate sufficiently. Obsolete political systems conceived in previous centuries are ill-equipped to unleash the enormous opportunities in twenty-first century innovation. Seasteaders envision a vibrant startup sector for governance, with many small groups testing out innovative ideas as they compete to better serve their residents’ needs.

Currently, it is very difficult to experiment with alternative social systems on a small scale; countries are so enormous that it is hard for an individual to make much difference. The world needs a place where those who wish to experiment with building new societies can go to test out their ideas. All land on Earth is already claimed, making the oceans humanity’s next frontier.

You only have to reach the next paragraph to discover that the seasteaders have already given up – for now, anyway – their plan to build on the open ocean. Open oceans have big waves a lot of the time, rather inconveniently for city life, and they are regularly tossed by gigantic storms that would smash the city shown on the SI's web site (above) to smithereens. So for now they are hoping for something a little less free:


Our first stride to the seas will be the Floating City Project, through which we are crafting practical plans for the world’s first floating community with significant political autonomy located within a host nation’s protected waters.

The idea is to find a country that would be willing to let the SI build a city in some protected bay. This would help with storms and also with the other obvious problem of such a scheme, which is who would defend the city against pirates. There might even be countries willing to try this. But in return the host country would surely insist on enforcement of some of its laws, for example against drug trading, smuggling, tax evasion, harboring of fugitives, and the like. Which means that the floating city will have to have law enforcement. The host country would no doubt also insist on some payment for the services they provide (such as protection from pirates), which means the floating city will have to collect taxes, so it will have to have tax laws and tax collectors.

This is already starting to sound a lot like government. And we haven't even gotten to all the stuff the floating city will have to provide for itself, from maintenance to drinking water to electricity. Who will decide what to charge for these things and what to do with people who fall behind on their bills? Some of the people saddest about the non-appearance of floating cities are not libertarians but anti-libertarians, who were hoping somebody would try a libertarian paradise so as to demonstrate that it won't work:


Of all Mr. Thiel’s social-engineering enthusiasms, one I would have most loved to see play out is Seasteading, an initiative to create libertarian utopias on artificial islands in the middle of oceans. . . . Recently Mr. Thiel suggested that he’d gone cold on Seasteading, because of cost and practicality. Unmentioned was the possibility that the experiment would have come to an ideologically inconvenient conclusion: that a small island — whether created by nature or man — would be an astonishingly bad place to live without rules.

The innovations created by brilliant inventors and entrepreneurs are great. But they do not appear in a social vacuum. Consider the career of Thiel's old Paypal partner Elon Musk. Musk has become one of the tech world's biggest heroes, and he, like the rest of them, regularly complains about regulatory interference in his companies. But the businesses he has chosen to focus on, space and electric cars, depend absolutely on the government. In the short term the government is the main market for space launch services, and the work being done by Space-X draws on decades of pioneering work by the U.S. and Russian governments. Musk's electric cars receive a large subsidy from the government. More broadly people drive cars in large part because governments have acted over the decades to create standards in everything from turn signals to stop signs that make driving safe.

I understand why brilliant innovators chafe against the regulations of our highly bureaucratic society. I work in regulation, and as I have said many times sometimes even I am astonished at the number of hoops that a major project has to pass through. But that is not because regulators are evil; it is because balancing the needs of business with the demands of neighbors and other citizens is just a hard problem. Alex Tabarrok recently argued that the first step in making it easier to repair our crumbling infrastructure should be repealing all historic preservation laws. This would eliminate my job and those of half my friends, so perhaps I am not the best person to make a fair evaluation of this proposal. But I think it would do a lot less than he thinks to speed up bridge replacement and the like. The main reason the Historic Preservation Act was passed in 1966 was that government agencies found it to burdensome to keep dealing with calls to preserve historic buildings and neighborhoods on a case-by-case basis, and they needed a regular process to evaluate claims that this or that place was "historic". It was Interior Secretary Mo Udall who called for the bill, after he had spent dozens of hours in meetings about a single historic house in Virginia. Repealing the laws won't silence the demands of preservationists, it will just move those demands to other parts of the development process that won't be as well qualified to deal with them.

People will disagree, and that means there have to be measures in place to adjudicate these disagreements, which means that government and bureaucracy are inevitable. Even for Seasteaders.
Posted by John at 7:24 AM

Clearly these guys have never heard about the glorious Principality of Sealand!

In all seriousness, though, I imagine there's plenty of claimed land that they could squat on that no one would ever bother to evict them from unless they started doing something seriously destructive. I bet the Russians would sell them some of the frozen wastelands of the Siberian Sea for a reasonable price, and there's lots of blasted rock in the Sahara which might be nominally controlled by certain nations but which ultimately is ruled by the unrelenting sun and lack of water.