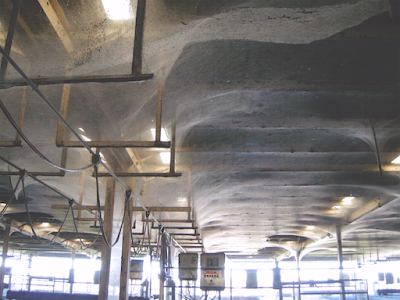 Back in 2009, the Back River Wastewater Treatment Plant in Baltimore called in some professional entomologists to help them with what they called an "extreme spider situation" in their sand filtration building. The entomologists later wrote,


We were unprepared for the sheer scale of the spider population and the extraordinary masses of both three dimensional and sheet-like webbing that blanketed much of the facility’s cavernous interior. Far greater in magnitude than any previously recorded aggregation of orb-weavers, the visual impact of the spectacle was was nothing less than astonishing.

In places where the plant workers had swept aside the webbing to access equipment, the silk lay piled on the floor in rope-like clumps as thick as a fire hose. 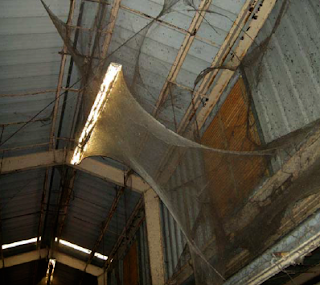 The building measures about 4 acres (16,000 m2). Counting up the spiders in a couple of small sample areas, the entomologists calculated that there might be 35,176 spiders per cubic meter, or 107 million in the whole structure. (They considered this estimate "markedly conservative.") 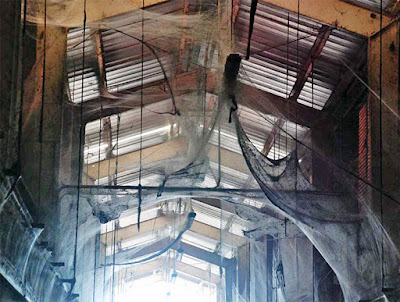 This crazy story has slowly spread around the internet, largely because of a 2014 story in Wired by Gwen Pearson. It eventually made its way to my Facebook feed, where it showed up yesterday. 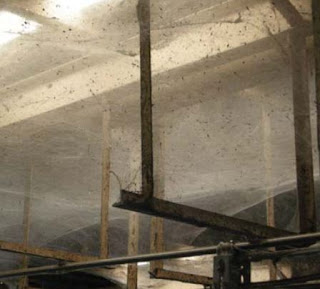 The spread of the story led to a deluge of requests to the American Entomologists for access to the article, and they finally caved and put the original piece online where anyone can see it. 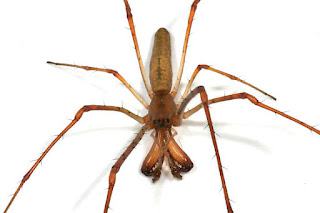 The most common species in the giant web, making up 75 percent of the total, was Tetragnatha guatemalensis. (Magnified picture; remember they are mostly about a centimeter across.) These are the champion builders of giant webs in North America. Their family is sometimes called the "long-jawed orb weavers," for obvious reasons. These are the same spiders that built those tree-covering webs in Texas you may have seen pictures of. One reason the webs in the sand filtration facility got so much bigger is that they are protected from thunderstorms, which badly damaged the Texas webs not long after the famous photographs were taken. 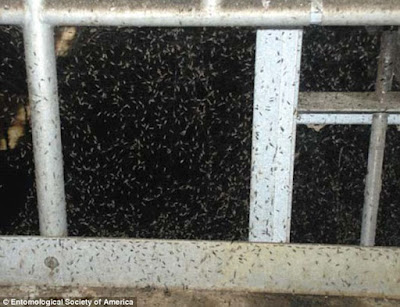 The recommendations the entomologists offered to the wastewater treatment people included the following:


Onsite personnel should be reassured that the spiders are harmless and the facility's immense shroud of silk should be presented in a positive light as a record-breaking natural history wonder.

That's making lemonade from your lemons.
Posted by John at 11:06 AM

I've seen this story before, and my gut reaction is still the same - kill it with fire.

Very little in the facility looks all that flammable, and I doubt the biomass itself would burn at terribly high temperature or for very long, so couldn't they just use some propane torches or similar to clear out the structures? With slow, careful application and the ready presence of extinguishers for use in the event of burns progressing out of control, surely they could clear it out in short order?

Of course, then the midge population would explode without these predators, with unknown effects on the larger ecosystem. Other predators might move in to capitalize on the vacancy, or the midges might simply go unpredated and prove a greater nuisance than the spiders, both while alive and by leaving corpses at the ends of their natural lifespans.

I imagine if there was a better solution, they'd have found it by now.

Why kill it at all? I think it's pretty cool.

What evidence do we have for what they're eating? Is it midges? When I see masses of spiders like that, I wonder in my ignorance if they are mostly eating each other.

Are the webs a collective project? Are they in any sense social animals?

Should I take it that those spiders are an "invasive" species from Guatemala?

To be fair, I said my gut reaction, not my reasoned one. Thus I don't feel compelled to really defend it to any degree, other than to say I imagine it's the sort of gut reaction that a large majority of people would have to encountering such a situation.

As for what they're eatting, the structure in question processes large amounts of wastewater which flows in the open air, and both midges (as well as other flies and related) and spiders of all kinds are known to overwhelmingly congregate in such environments.

Regarding cannibalism, while I do know that various species exhibit the behavior, I have no idea about this particular species. That said, obviously no population can sustain itself purely on self-predation, and there must be an alternative food source involved - which would be small flying insects, in this case chiefly midges given the proximity to water.

As for sociality, many species are solitary, but certain kinds are quite social - or perhaps "quasi-social", or "colonial" would better convey the situation. Obviously they live in the same collective nests and webs, but they also care for their youth and even hunt or subdue prey collectively. Some species of spider extend even further to "eusociality", creating swarms that operate similarly to those of ants and other "hive" insects. But again, I'm not familiar with this specific species, so it could exhibit any of the above behaviors.

As for being an invasive species, that's a tricky sort of question. The species does seem to have increased its range, but it wasn't that far away to begin with, and it could be argued they're simply moving into adjacent regions where climate change has rendered the area more hospitable for them. It's one thing for human acitvity to introduce European rats to isolated Pacific islands, and quite another for a spider from Mexico and Guatemala to move a bit north into the Southern US of its own accord.

Clouds of midges. Nobody knows how these giant webs are built, because there isn't any evidence that the spiders are working together or communicating in any way. To some extent the giant webs are simply the product of lots of old individual webs collapsing on top of each other, but that may not be the whole story.