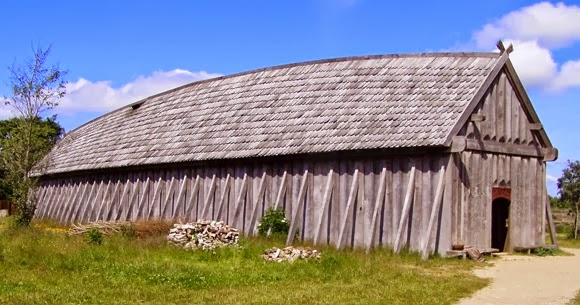 The Vikings did not build to last. They built almost entirely in wood or turf and seldom invested much effort in elaborate foundations. There are, therefore, no buildings still standing from the Viking Age. To get a sense of what their buildings were like we have to look at reconstructions, like this one of an 8th-century chieftain's longhouse at the Ribe Viking Center in Denmark.

What survives archaeologically from such a house is a pattern of posts and ditches, like this from Lejre in Denmark. You can see that since the houses did not last very long, they had to be rebuilt every generation or so, leaving these overlapping patterns. You can also see that there are two sets of posts, one inside and one outside the wall. Sometimes the outside posts clearly leaned in, which is why they are reconstructed that way in the Ribe longhouse above. 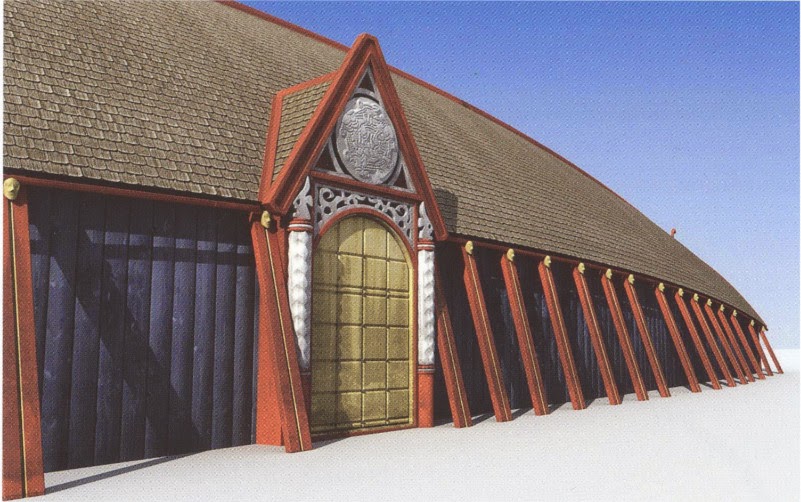 Digital reconstruction of the ninth century hall at Lejre. 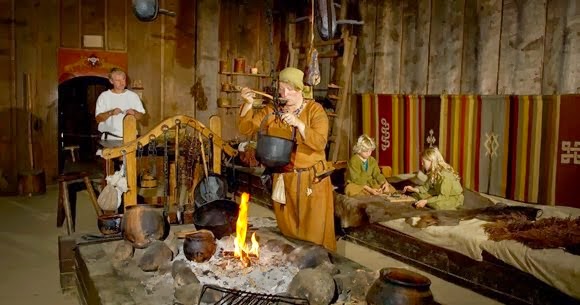 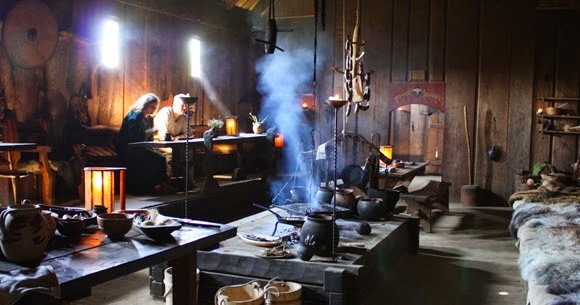 Interior of the Ribe Longhouse. As we understand it, a longhouse included at least two kinds of space, a large communal area around the hearth, where cooking, eating, and socializing were done and the lesser folk slept, and separate stalls or sleeping platforms for the more senior couples and families. On some archaeological sites the hearth is still clearly visible, but on some there is no trace of it. Perhaps the Vikings used cooking tables like the one above, which are well attested from later medieval Scandinavia. 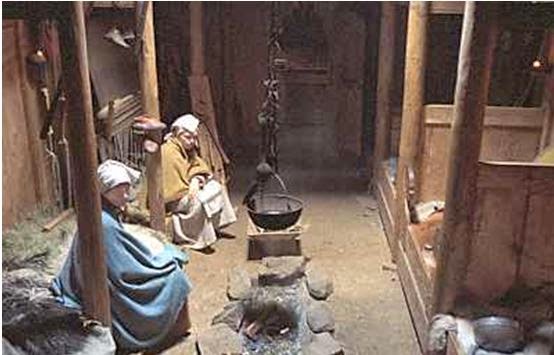 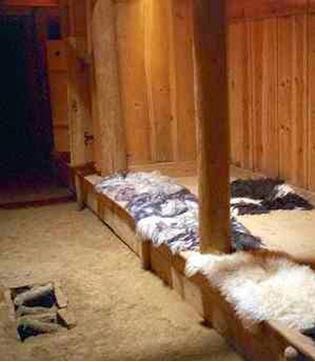 Two views of reconstructed Icelandic houses with sleeping stalls or platforms. Sorry about the pictures, but Icelandic houses had no windows and were very dim. Those small, stone-lined hearth pits are copied exactly from archaeological remains. A house like this was sealed up against the elements, so only a small fire was used to warm it, keeping the smoke to a minimum. Still must have been quite cold inside in the midst of winter. 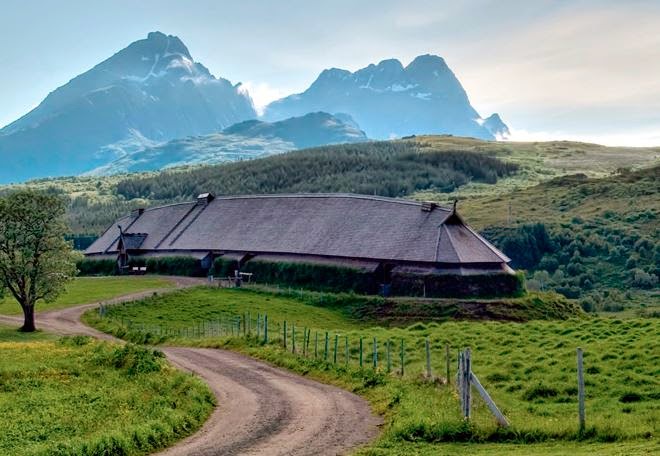 The biggest Viking longhouse yet discovered was at Borg on Lofotr Island, Norway, which you see reconstructed here. This behemoth was 270 feet (83 m) long. 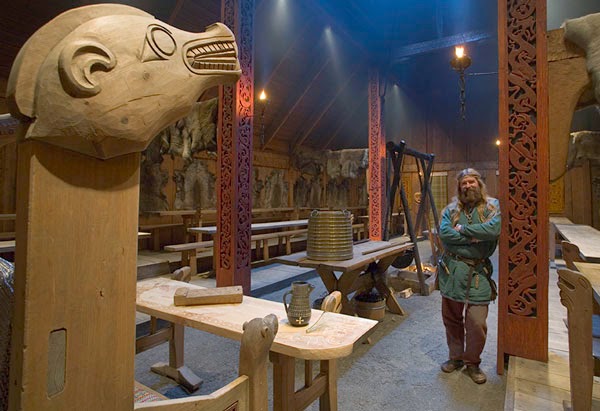 Interior view of the Borg longhouse; this is the feasting hall. The elaborate woodwork is of course a guess, but given how much Viking carving does survive on the chests and carts from Oseberg and other burials, it seems very likely that such a grand house was also highly decorated. 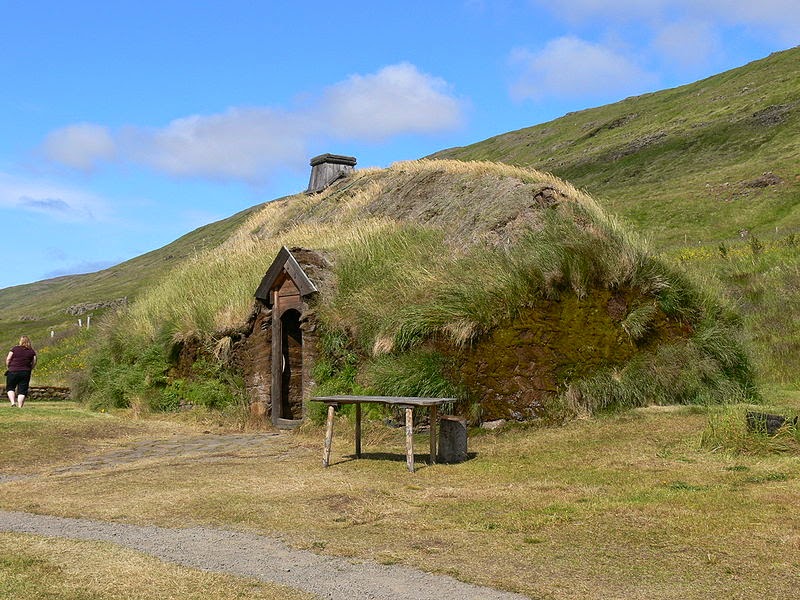 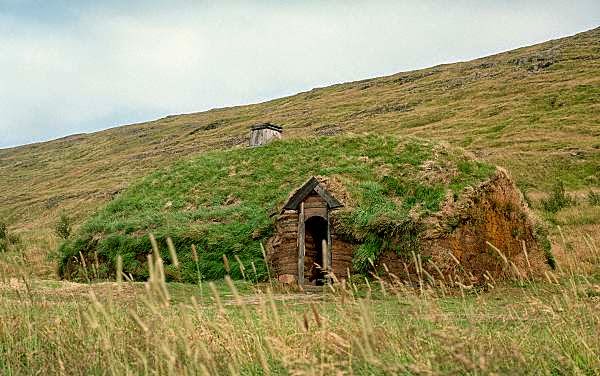 In Iceland, Greenland and northern Norway, longhouses were generally built of turf. They still needed wooden beams to hold up the roof, though. This is a replica of a modest longhouse at Erikstadir in Iceland. 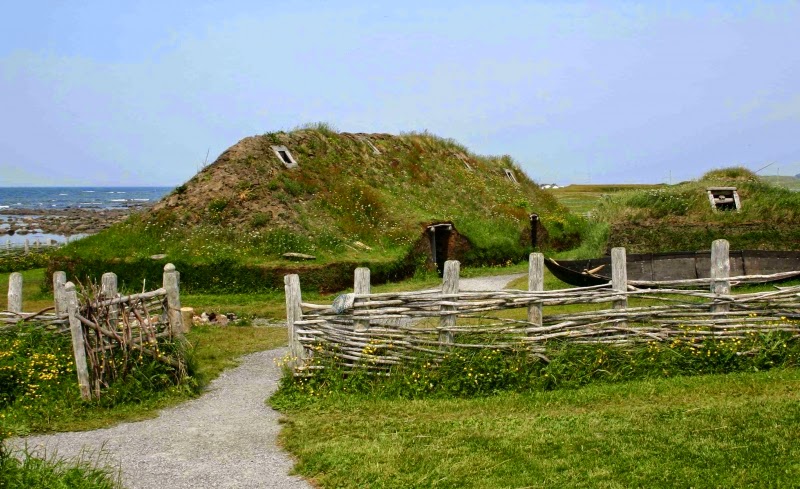 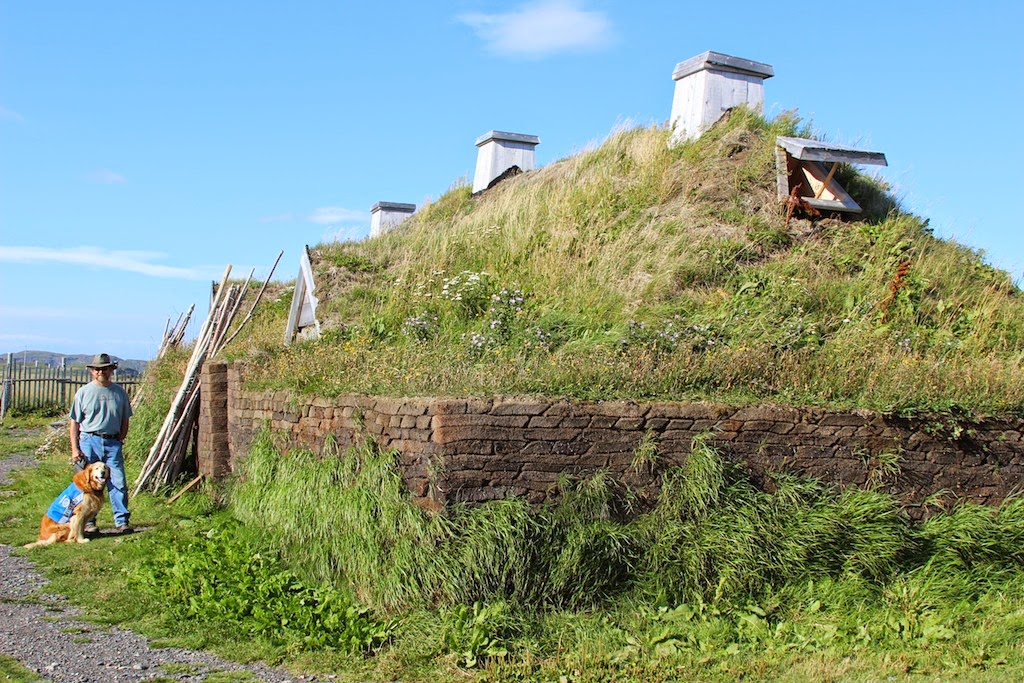 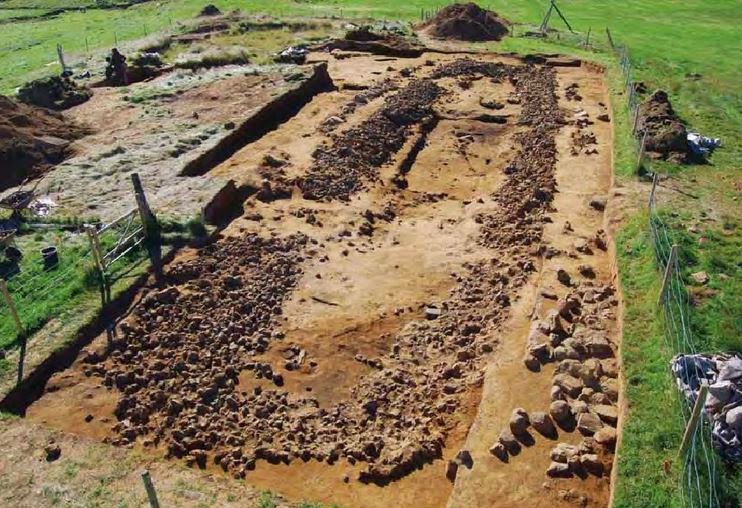 Remains of a turf longhouse at Mosfell on Iceland. 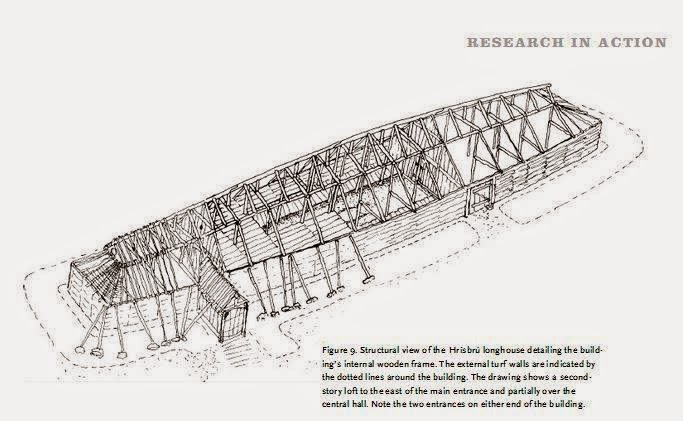 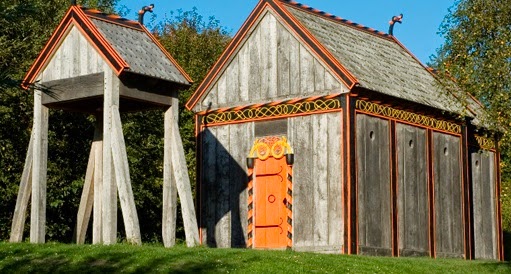 Viking age churches were small, simple constructions -- at least that's what their surviving foundations look like. This reconstruction of the church at Moesgard in Denmark has some elaborate woodwork. 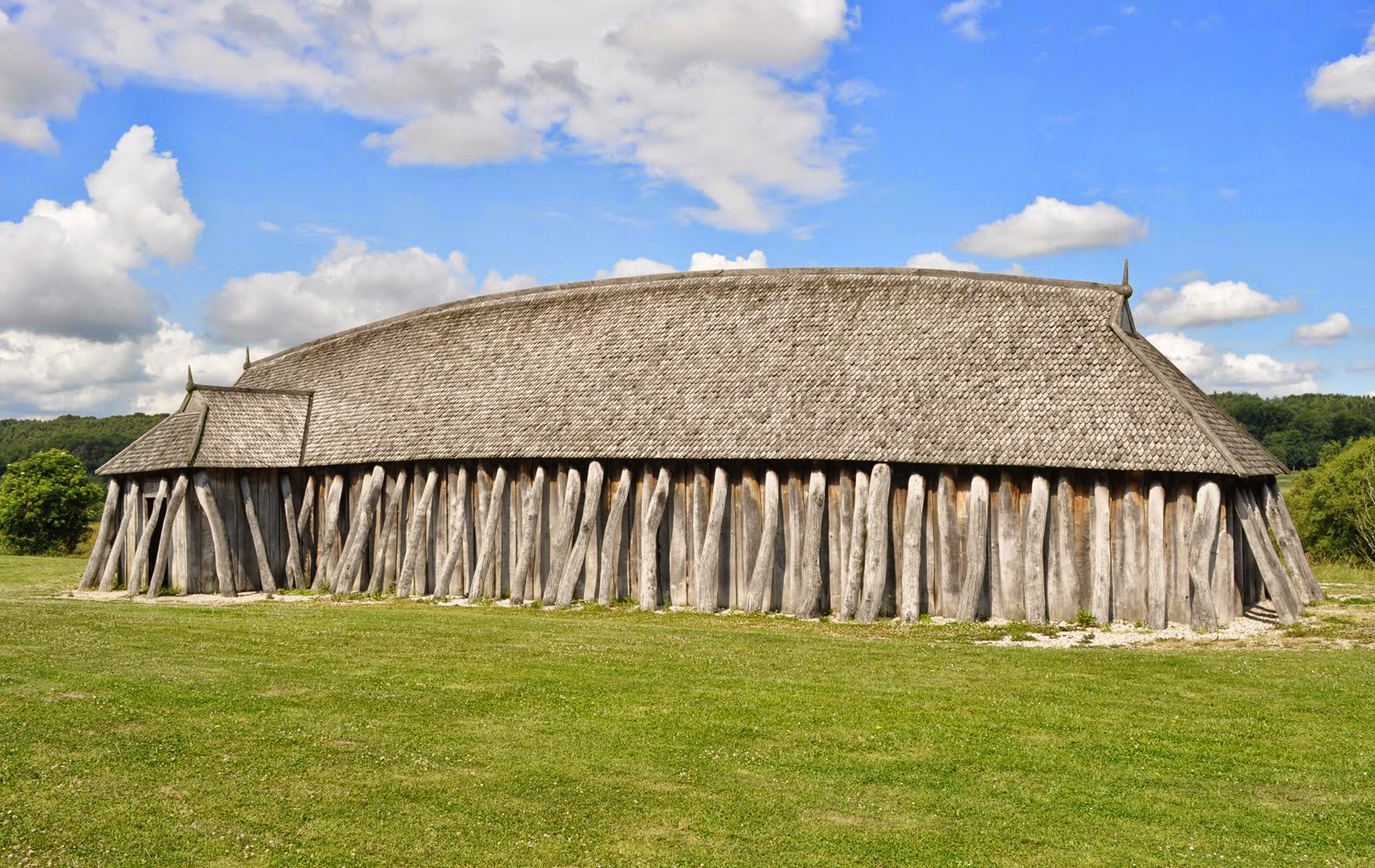 Fyrkat. I think it is wonderful that so many of these have been rebuilt, allowing us to get a real sense of what life was like in that firelit age.
Posted by John at 7:31 AM