Philip Caputo, A Rumor of War 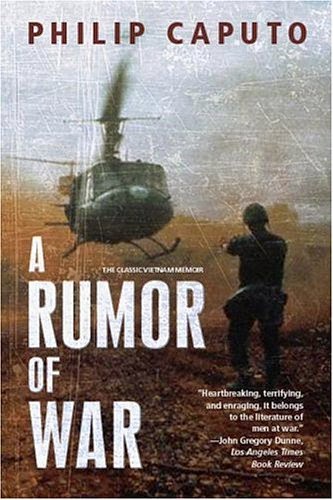 Here is a famous book that fully lives up to the extravagant praise heaped on it, one of the best if not the best war memoir I know. It is exciting, disturbing, funny, sad, and in the end depressingly wise.

Philip Caputo arrived in Vietnam in 1965 with the first US combat regiments, a gung ho lieutenant certain the Marines could whip the Viet Cong in a few months, roll back Communism and restore order to the world. A year later he was facing a court martial, charged with ordering the assassination of two Vietnamese civilians. Not long afterward he returned to America, disillusioned and sick of war but not able to immerse himself in the antiwar movement, either. He was too conflicted by what he experienced and what he did to shout slogans. In the memoir Caputo spends pages trying to explain to his defense attorney that although he is not guilty of murder, he is not exactly innocent, either; murder was done, but more by the war and the way the US chose to fight it than by an particular person. The attorney is having none of it -- the war is not on trial, he says, you are, and you had better get your story straight. It is a perfect moment of absurdity.

A Rumor of War is a highly literary book, and Caputo admits that it evolved through numerous forms over nearly ten years before it gelled into this apparently straightforward memoir. But the stories he tells are gripping, maddening, and deeply sad. He and his men patrol the rice paddies and jungles around Danang, looking for Viet Cong and sometimes finding them, but more often getting blown up by mines or booby traps, shot at by snipers, eaten by insects, broiled by the sun, and generally made miserable. So far as they can tell, they are having no effect whatsoever on the VC. Caputo's first glimpse of the magnitude of the struggle comes on a helicopter flight toward a village at the foot of the forested mountains:


We were flying parallel to the mountains; the Cordillera spread out before us, and it was the most forbidding thing I had ever seen. An unbroken mass of green stretched westward, one ridgeline and mountain range after another, some more than a mile high and covered with forests that looked solid enough to walk on. It had no end. It just went on to the horizon. . . . Looking down, I wondered for a moment if the operation was somebody's idea of a joke. Our mission was to find an enemy battalion. A battalion -- a few hundred men. The whole North Vietnamese Army could have concealed itself in that jungle-sea, and we were going to look for a battalion. Crush it in a hammer and anvil movement. We were going to find a battalion and destroy it. Search and destroy. I half expected those great mountains to shake with contemptuous laughter at our pretense.

As they lose more and more buddies and grow more and more miserable, the men of Caputo's platoon turn vicious. Their cynicism was deepened by the orders they fought under, the regime of body counts and the commonly heard saying that "Every dead Vietnamese counts as VC."


Everything rotted and corroded quickly over there: bodies, boot leather, canvas, metal, morals. Scorched by the sun, wracked by the wind and rain of the monsoon, fighting in alien swamps and jungles, our humanity rubbed off of us as the protective bluing rubbed off the barrels of our rifles. We were fighting in the cruelest kind of conflict, a people's war. It was no orderly campaign, as in Europe, but a war for survival waged in a wilderness without rules or laws; a war in which each soldier fought for his own life and the lives of the men beside him, not caring who he killed in that personal cause or how many or in what manner and feeling only contempt for those who sought to impose on his savage struggle the mincing distinctions of civilized warfare -- that code of battlefield ethics that attempted to humanize an essentially inhuman war. According to those "rules of engagement," it was morally right to shoot an unarmed Vietnamese who was running, but wrong to shoot one who was standing or walking; it was wrong to shoot an enemy prisoner at close range, but right for a sniper at long range to kill an enemy soldier who was no more able than a prisoner to defend himself; it was wrong for infantrymen to destroy a village with white-phosphorus grenades, but right for a fighter pilot to drop napalm on it. Ethics seemed to be a matter of distance and technology. You could never go wrong if you killed people at long range with sophisticated weapons. And then there was that inspiring order issued by General Greene: kill VC. In the patriotic fervor of the Kennedy years, we had asked, "What can we do for our country?" and our country answered, "Kill VC." That was the strategy, the best our best military minds could come up with: organized butchery. But organized or not, butchery was butchery, so who was to speak of rules and ethics in a war that had none?

The bodies pile up, as does the indifference of the Marines, and you can sense something bad coming. Finally some of Caputo's men storm off in a rage to get revenge for buddies killed by a booby trap, but instead of the bomb makers they mistakenly kill two friendly civilians. It is the sort of mistake that, as Caputo says, would have hardly merited a shrug if it had been done by a bomber pilot, but some of the senior officers can sense their men slipping away from their control, and they decide to prosecute Caputo and his squad in a bid to restore some kind of discipline to the ranks.

Caputo's book brings home one of the most important truths about war: to fight one without any idea how to win it is a crime. Caputo is certain that all the men he lost died for no reason, and likewise all the Vietnamese they killed. From a distance that may not be entirely true, but it was how Caputo and many thousands of others experienced the war. Their experience of purposeless suffering and slaughter shaped a generation's view of war, in and out of the armed forces, and the conflict over how to understand what they did is still very much with us.
Posted by John at 10:46 AM