Independence Will Not Help Poor People in Scotland 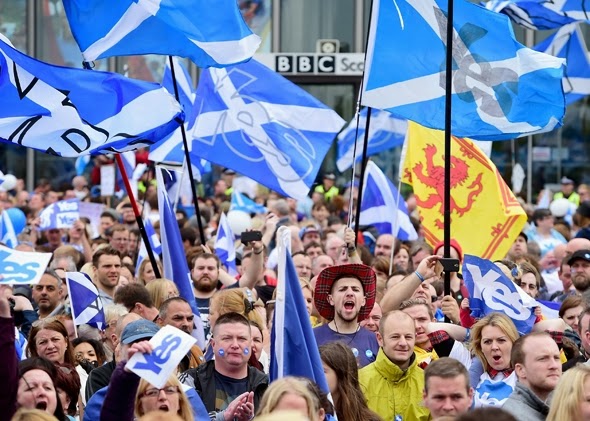 Polls consistently show that young people in Scotland favor independence more than their elders, which is why the referendum's backers authorized 16- and 17-year-olds to vote (just this once). Jack Shenker at Slate attributes this to newly radical thinking:


The story of Scotland’s forthcoming referendum on independence, which takes place on Thursday, is about many different things—the majority of which have received very little attention from a mainstream press determined to interpret the debate through a tired prism of establishment parties, establishment politicians, and establishment narratives. One of those things is about what happens when big, nominally social-democratic political institutions—in Britain’s case, the pro-union Labour Party—sign up to the prevailing economic orthodoxy, leaving those who feel excluded by a doctrine of free-market fundamentalism with no one to represent them. Another is about the cracks that open up when an era of widespread, popular disillusionment with authority coincides with a vote in which almost every organ of authority—be it political, financial, or editorial—is advocating on one side of the argument, while all the popular momentum lies with the other.

Perhaps most importantly though, it’s a story about the emergence of a generation that has big and radical thoughts, at a time when all the ideological questions that matter are supposedly long-settled and when big, radical thoughts are distinctly out of fashion. To the alarm of just about everyone else, it’s a story about a generation that displays little instinctive faith in the status quo.

Well, great. We could all use some new economic thinking focused on greater equality. Let's shake up the status quo. But where are the ideas? What are they? And if the Scottish National Party has some, why haven't they done anything about implementing them during their reign in the Scottish Parliament? They said devolution would make things better for Scots. It has not. So now they say they need full independence to do more for Scots. That won't help, either.

It upsets me to see that young Scots think independence is some kind of new and radical idea. (My sons are pro-independence for the same reason.) But tribalism is not new; it is the oldest idea of all. If you ask me, at base there is no difference between Scottish independence and "kill all the Amalekites, every one." Or World War I. At base they are the same old sin of insisting that we are different from them, and better. Real radicalism, the kind that came out of the Enlightenment and has led to democracy and just about everything ever done in modern times to help poor people, is international. Real radicalism shuns tribalism, which is fundamentally a conservative sentiment.

I understand that left-wing Scots feel frustrated at always being outvoted by more conservative people in southern Britain. But so do left-wing people in northern Britain and for that matter in London. If Scotland secedes, that will entrench the conservatives in power in Britain, and no matter what any future Scottish government does their economy will remain dependent on London for generations, which means that by seceding the Scots will give up all power over the government that mainly controls their economy. Great idea. Every economist who has looked at the numbers says that independence will hurt Scotland economically, stealing around $5,000 from every Scottish family over the next few years. How is that going to help struggling neighborhoods?

Ask people in Slovakia or Turkmenistan if independence helped them.

If Scots are unhappy with their political choices, they should found new parties, or take over the Labour Party. If they think that will be easier in Scotland than it would be across all of Britain, they are mistaken.

Making the world better is hard. There are no easy ways to do it. Pro-independence Scots seem to think that this independence referendum is a shortcut to a more just and equal society. They are mistaken. Whether the referendum passes or fails, they will soon  learn this hard truth.
Posted by John at 8:19 AM

Maybe there's room here for a Baroque-era, curmudgeonly denunciation of lightsome chasing after novelties and sluttish human fickleness. I get the impression that many of these voters, especially the younger ones, are simply tired of things that are tired. In claiming to be "radical," they seem to saying "I don't want to be bored." Maybe there's something to that "Fight Club" business, though I personally found the movie, well, boring. In any case, these "radicals" may find they get what they wished for, and learn to regret it. I suppose, as a devotee of the tired establishment, I'll find some satisfaction in that.