Things One Knew Nothing About 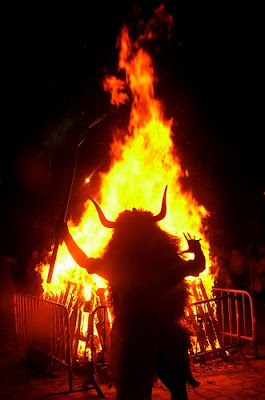 How about Basque mythology?

Basajaun. A benign wood spirit of the Basque, whose name means "lord of the woods". He protects the flocks and herds against predators and thunderstorms. He taught mankind the art of agriculture and forging. The spirit is mischievous, but not malignant. His wife is Base-Andre. Their characters shift considerably from story to story. In some stories Basa-Jaun is an ogre and his wife a witch (who often helps her husband's victims escape).

Ilazki. Although her image is quite ambiguous, sometimes good, sometimes evil, she is treated with uttermost respect and called Ilargi-Amandre (Lady Mother Moon). Her name means "light of the dead" (hil argia) as she lights the ghosts of the deceased. She is intimately linked to them, and them to her. Thus, to die when the moon was close to the first quarter was considered as a good omen for the afterlife, because the soul of the departed would grow with the orb. The Moon has also a great influence on plants and trees, and some should or should not be cut or collected, depending on Ilazki's phase.

Maide. This is a bad genie from the Basque folklore that usually enters a house through the chimney. Once inside, the spirit will destroy everything, so the only way to prevent its intrusion is to keep the fire burning all the time.

Mari. The supreme and foremost goddess of the Basque pantheon. She is the goddess of thunder and wind, the personification of the Earth. The thunder spirit Maju is her consort, and the benign spirit Atarrabi and the evil spirit Mikelats are her sons. She protects the travelers and the herds, and gives good council to humans. She rides through the sky on a chariot pulled by four horses, or on a ram. Sometimes she assumes the shape of a white cloud or a rainbow. Mari ("queen") is represented as a woman with a full moon behind her head, or in an animal shape. Her symbol is a sickle.

Ortzadar. The Personification of the rainbow and guide of souls. When a person dies, the soul escapes the body and, using the rainbow as a ladder, reaches the Moon. From there, the soul is transformed into rain that will eventually fall on the land. Then, the soul will reincarnate.

Ostri. The Sky primitively in Basque mythology, he became later an equivalent of Heaven. During the evangelisation of the Basque country, it was thus nearly natural that the Christian God might be related to Ostri, and thus named. This being is often represented by the "lauburu" (literally, "four heads", it is a sort of swastika), that symbolises the contrasted forces of good and evil (depending on which direction the wheel of the swastika turns).
Posted by John at 8:08 PM