The Magician Steps ouf of the Closet 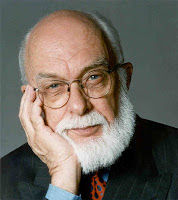 James Randi announces that he is gay. Or, actually, that he is a homosexual, because, as he put it, "there is not much gay about being a homosexual."

I think it was common for men of his generation (he is 81) to regard the discovery of their own sexuality as a sad thing, implying either chastity, creating a hypocritical divided life, or immersion in a subculture that would cut them off from much of our society. Randi says he has come out because "there has emerged a distinctly healthy acceptance of different social styles of living". There is something to take pride in about our troubled age.
Posted by John at 12:17 PM